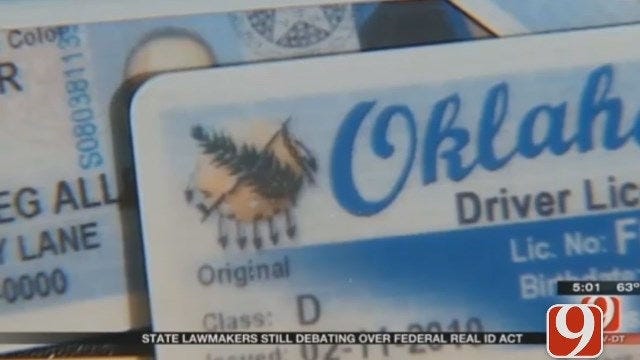 The Oklahoma House passed House Bill 1845 Thursday which will bring Oklahoma into compliance with the federal REAL ID Act.

The bill passed with a vote of 78-18 and now heads to the Senate for consideration.

“The House has passed a bipartisan measure that would bring our state into compliance with federal law while protecting the privacy and freedom of our citizens. Our bill provides Oklahomans an opt out that would let those concerned about privacy receive a non-compliant state-issued ID, but provides a compliant ID that would allow citizens who need access to federal installations or who desire to travel the ability to do so. Our goal is a swift resolution of this issue, and I hope our colleagues in the Senate will quickly pass this measure so we can turn our attention to other matters important to the citizens of Oklahoma.”

Passed by congress in May 2005, the REAL ID Act sought to make state driver’s licenses more secure. But Oklahoma passed a law in 2007 refusing to comply. The state has since applied for and received multiple extensions.

Oklahoma was granted an extension last month to become compliant with the REAL ID Act, but only through early June.

The Department of Homeland Security (DHS) originally denied the state’s request, which would have prohibited those without an approved form of identification from entering onto a military base or federal building.

The extension came just weeks before the grace period would have ended on Jan. 29, 2017. With the extension, Oklahomans with only a state-issued driver’s license will still be accepted up until June 6.

Although the extension for REAL ID compliance at military bases and federal building is set for June 6, enforcement for boarding commercial jets remains scheduled to begin Jan. 22, 2018.