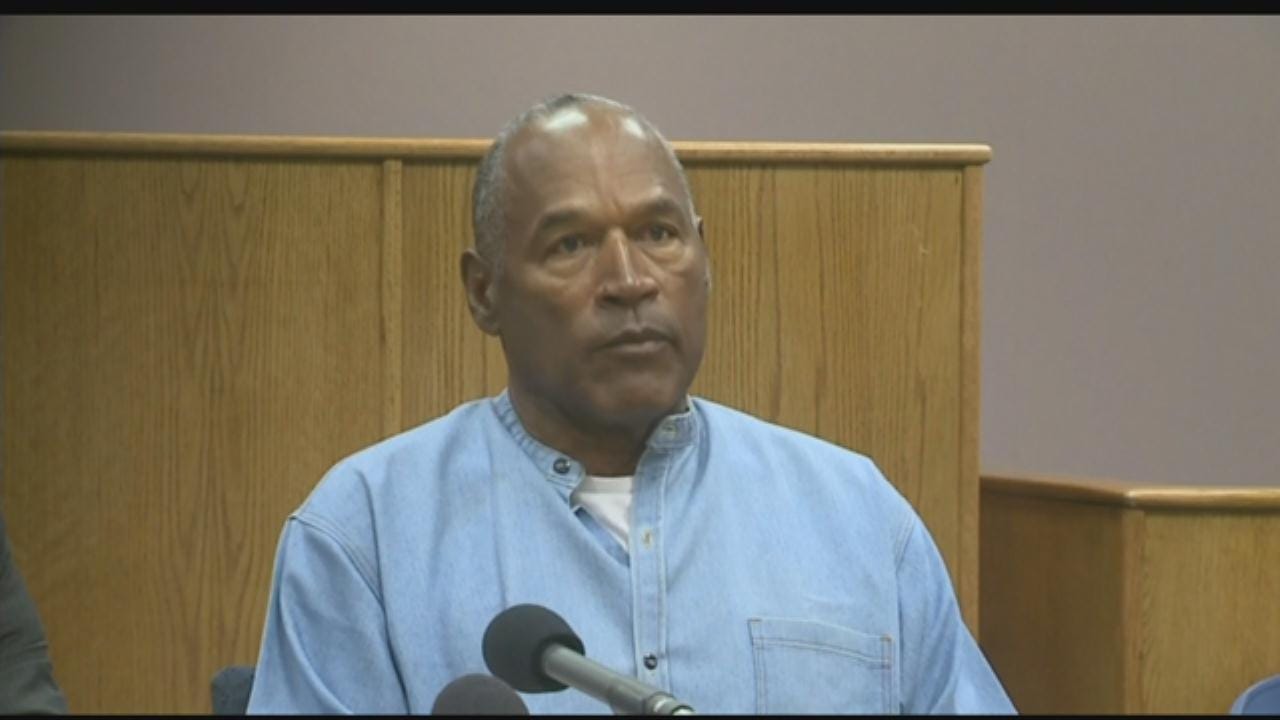 O.J. Simpson was granted parole Thursday after more than eight years in prison for a Las Vegas hotel heist, successfully making his case for release in a nationally televised hearing that reflected America's enduring fascination with the former football star.

Simpson, 70, could be a free man as early as Oct. 1. By then, he will have served the minimum of his nine-to-33-year armed-robbery sentence for a bungled attempt to snatch sports memorabilia and other mementos he claimed had been stolen from him.

All four parole commissioners who conducted the hearing voted for his release after about a half-hour of deliberations. Commissioner Tony Corda said Simpson had committed a "serious crime, and there was no excuse for it."

But Corda voted in favor of parole, citing that Simpson complied with rules of the prison, has no prior conviction, has community support and stable release plans, which include a move to Florida. The three other commissioners agreed.

But board chairwoman Connie Bisbee warned Simpson, "we do not look kindly on parole violations." Any violations may result in his return to prison, she said.

Then, as he was led down a hall, the former athlete raised his hands over his head in a victory gesture and said, "Oh, God, oh!"

During the hour-plus hearing, Simpson forcefully insisted - as he has all along - that he was only trying to retrieve items that belonged to him and never meant to hurt anyone. He said he never pointed a gun at anyone nor made any threats during the crime.

"I am no danger to pull a gun on anybody," Simpson said. "It was my property, I wasn't there to steal from anybody."

However, he apologized for his actions and said he had made amends with his victims.

Inmate No. 1027820 made his plea for freedom in a stark hearing room at the Lovelock Correctional Center in rural Nevada as the four parole commissioners in Carson City, a two-hour drive away, questioned him via video.

Gray-haired but looking trimmer than he has in recent years, Simpson walked briskly into the hearing room in jeans, a light-blue prison-issue shirt and sneakers. He chuckled at one point as the parole board chairwoman mistakenly gave his age as 90.

Connie Bisbee quickly corrected herself that Simpson is 70 and joked, "You look great for 90."

The Hall of Fame athlete's chances of winning release were considered good, given similar cases and Simpson's model behavior behind bars. His defenders have argued, too, that his sentence was out of proportion to the crime and that he was being punished for the two murders he was acquitted of during his 1995 "Trial of the Century" in Los Angeles, the stabbings of ex-wife Nicole Brown Simpson and her friend Ronald Goldman.

Before the hearing concluded, one of the two memorabilia dealers Simpson robbed, Bruce Fromong, said the former football great never pointed a gun at him during the confrontation, adding that it was one of Simpson's accomplices. Fromong said Simpson deserved to be released so he can be with his children.

Fromong said he had known Simpson for years and they remain friends. He said Simpson had offered him his apology, and he has forgiven him. He called Simpson a "good man" who "made a mistake."

"If he called me tomorrow and said, 'Bruce, I'm getting out, will you pick me up?'

He turned to Simpson and said, "Juice, I'll be there for you tomorrow."

Simpson appeared to cry and wiped his eyes.

Arnelle Simpson, the eldest of Simpson's children, also testified on his behalf, saying her father is not perfect but realizes what a mistake he made and has spent years paying for it.

At one point Arnelle Simpson paused, choking back tears and shaking her head.

"No one really knows what we've been through, this ordeal over the past nine years. My experience is that he's like my best friend and my rock."

She said Simpson has been a "perfect inmate" and "followed all the rules."

"As a family we recognize he is not the perfect man ...he has done the best to behave in a way that speaks to his overall nature and character which is always to be positive no matter what," she said.

"We just want him to come home, we really do," she added.

Simpson said that he has spent his time in prison mentoring fellow inmates, often keeping others out of trouble, and believes he has become a better person during those years.

"I've done my time. I've done it as well and respectfully as I think anybody can," he told the board.

Asked if he was confident he could stay out of trouble if released, Simpson replied that he learned a lot from an alternative-to-violence course he took in prison and that in any case he has always gotten along well with people.

"I had basically spent a conflict-free life," he said - a remark that lit up social media with sarcastic comments given the murder case and a raft of allegations he abused his wife.

Simpson said if released he plans to return to Florida, where he was living before his incarceration.

"I could easily stay in Nevada, but I don't think you guys want me here," he joked at one point.

"No comment, sir," one of the parole board members said.

When asked whether he had closing statements, Simpson said, "I am sorry things turned out the way they did."

He said when he began his prison term, he told the warden he would be no problem.

"I think I've kept my word," Simpson said. "As I said I've done my time. I'd like to get back to my family and friends."

An electrifying running back dubbed "The Juice," Simpson won the Heisman Trophy as the nation's best college football player in 1968 and went on to become one of the NFL's all-time greats.

The handsome and charismatic athlete was also a "Monday Night Football" commentator, sprinted through airports in Hertz rental-car commercials and built a Hollywood career with roles in the "Naked Gun" comedies and other movies.

All of that came crashing down with his arrest in the 1994 slayings and his trial, a gavel-to-gavel live-TV sensation that transfixed viewers with its testimony about the bloody glove that didn't fit and stirred furious debate over racist police, celebrity justice and cameras in the courtroom.

Last year, the case proved to be compelling TV all over again with the ESPN documentary "O.J.: Made in America" and the award-winning FX miniseries "The People v. O.J. Simpson: American Crime Story."

In 1997, Simpson was found liable in civil court for the two killings and ordered to pay $33.5 million to survivors, including his children and the Goldman family.

Then a decade later, he and five accomplices - two with guns - stormed a hotel room and seized photos, plaques and signed balls, some of which never belonged to Simpson, from two sports memorabilia dealers.

Simpson was convicted in 2008, and the long prison sentence brought a measure of satisfaction to some of those who thought he got away with murder.