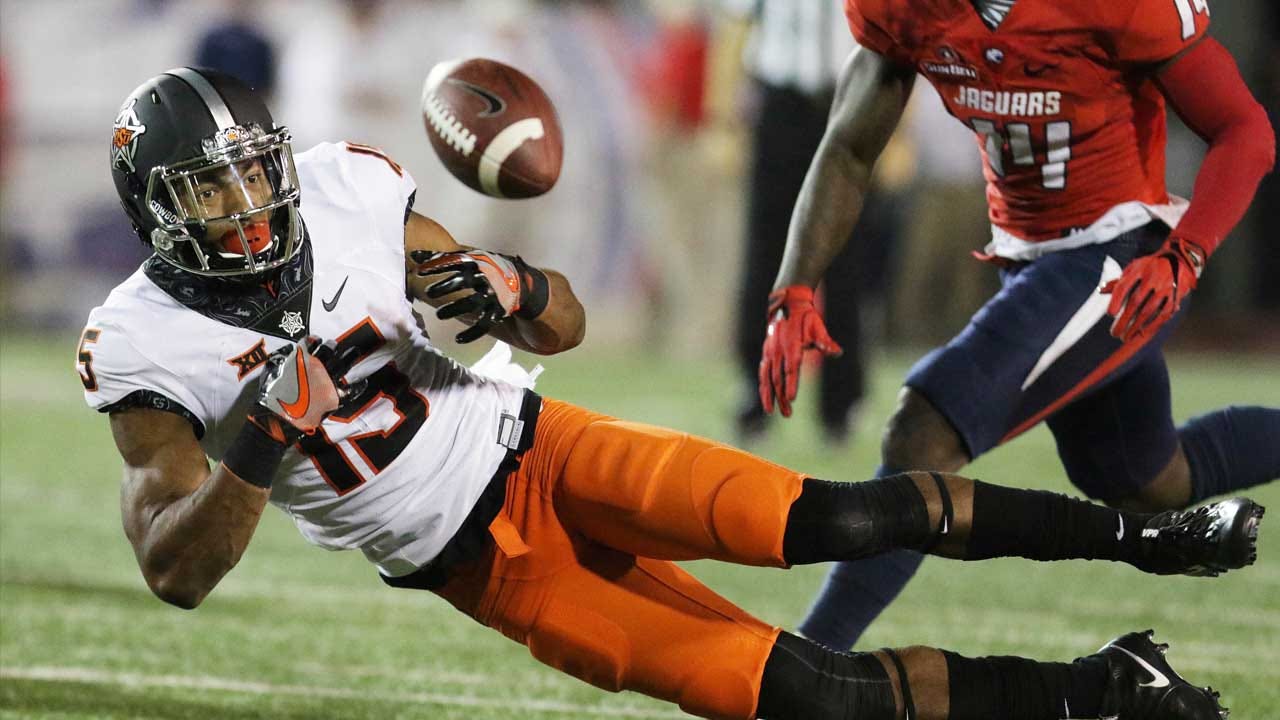 The Cowboys face Pittsburgh this Saturday and several members of the Oklahoma State football team met with media to preview the game.

On if he thinks Pitt will defend the OSU offense differently than last year:
"Possibly, but I think after all the film we have, we recognize their tendencies and they recognize ours. Every team has tendencies, but I think you have to keep what you're going to do somewhat close to your scheme. But we also have to be prepared for whatever is going to come at us and take what they give us so to speak."

On the offense's health:
"We're really good. It's been a physical practice today and the guys are rearing to go, but I think we're firing on all cylinders right now as far as health goes."

On the multiple talented receivers this year and not always being targeted:
"I feel like that's kind of what to expect now. We have so many guys that are just as good as I am, and when you have that many guys, you can throw it anywhere at anytime. They've been making pays and showing up out there, so it's been helpful."

On the uniqueness of OSU's offense and having so many guys step up:
"It helps keep us fresh. It keeps the fatigue off our legs, and when you're in the game, you go 100 percent. Put the next guy in, and just keep rotating."

On the balance of targets:
"Gundy has talked to us about it a lot. When it's your time to be in the game, go 100 percent because you never know when your number will be called again. Just go 100 percent every time."

On Marcell Ateman in the red zone:
"He gives us that 6-4, 220 frame. That's a nightmare for a corner to guard somebody that big, especially when you only have 10 yards to guard him. He's big, strong and can body you up, so he'll get the job done."

On Pittsburgh:
"It's just like any other opponent. You just take it week by week, and we've been putting in the work this week. We're ready to just go out there and play on Saturday."

On his commitment to OSU:
"It was everything I liked about the school. I already liked it as a kid, and when I came up here to visit and visit with the coaches, they really supported me, so it was an easy decision."

On what was so appealing about OSU to him:
"The environment, the coaches and the players. It was a family atmosphere, and it was a pace I knew I wanted to be."

On his thoughts as he prepares for Pittsburgh:
"I'm just taking it a day at a time. We come out here and work. We had a great practice today, so we'll go watch some film over today's practice, come out tomorrow and practice even harder. For Saturday, we should be ready to go."

On how last year's game prepared them to face Pittsburgh again:
"They had a lot of people graduate, so they're kind of a new team on defense. They'll have the same scheme but different players. We'll see how the game play goes, go out there and execute."

On their approach to Saturday's game:
"We were always taught, 'You see a little, you see a lot.' Can't look at everything, or you'll miss a lot of things. Just keep your eyes right on the keys that your coach gives you and we'll go from there."

On defending big plays:
"We see those big plays that other teams have made, but we always go on the field and think that they are going to have their best game against us. We just got to make the plays when they're in the air."

On playing close to his hometown:
"I'm definitely looking forward to it. A lot of friends are going to come out there. Definitely high school buddies, kids I grew up with, so that'll be definitely something to look forward to."

On his approach to kicking:
"I'm just going out there, just visualizing myself kicking the ball through the uprights every time. Every kick's just an extra point to me."

On if he's worked on late-game situations in practice:
"I've been really working every year in practice. A lot of the team doesn't really get to see what us specialists do in the off time, but that's one thing I like to practice. If it comes down to a game-winning situation, just got to have that in my back pocket just to be comfortable when I go out there and kick the ball through the uprights."

On playing at Heinz Field:
"Playing on Heinz field, I think that's going to be a great experience for us. I enjoy going on the road. I think it's always a good challenge whenever we get to go into a hostile environment and silence the crowd, so it'll be good for us … It's something that I've been thinking about since last year. After the season ended I've been looking forward to this one, so I'm excited to be going up there and playing in a big-time NFL stadium.

On playing a team like Pittsburgh on the road:
"We had a pretty solid first two weeks but we understand that it's about to pick up here this week and so we're excited for the challenge and we're working hard."

On the feeling he had after breaking a long run:
"It felt good, but I was tired. I'm just joking, but it felt good just being back out there."

Alex Cameron If you watched Tuesday night's presidential debate, you probably won't soon forget it. At times chaotic, filled with interruptions, personal attacks, and just very unlike debates of the past.
View More Stories