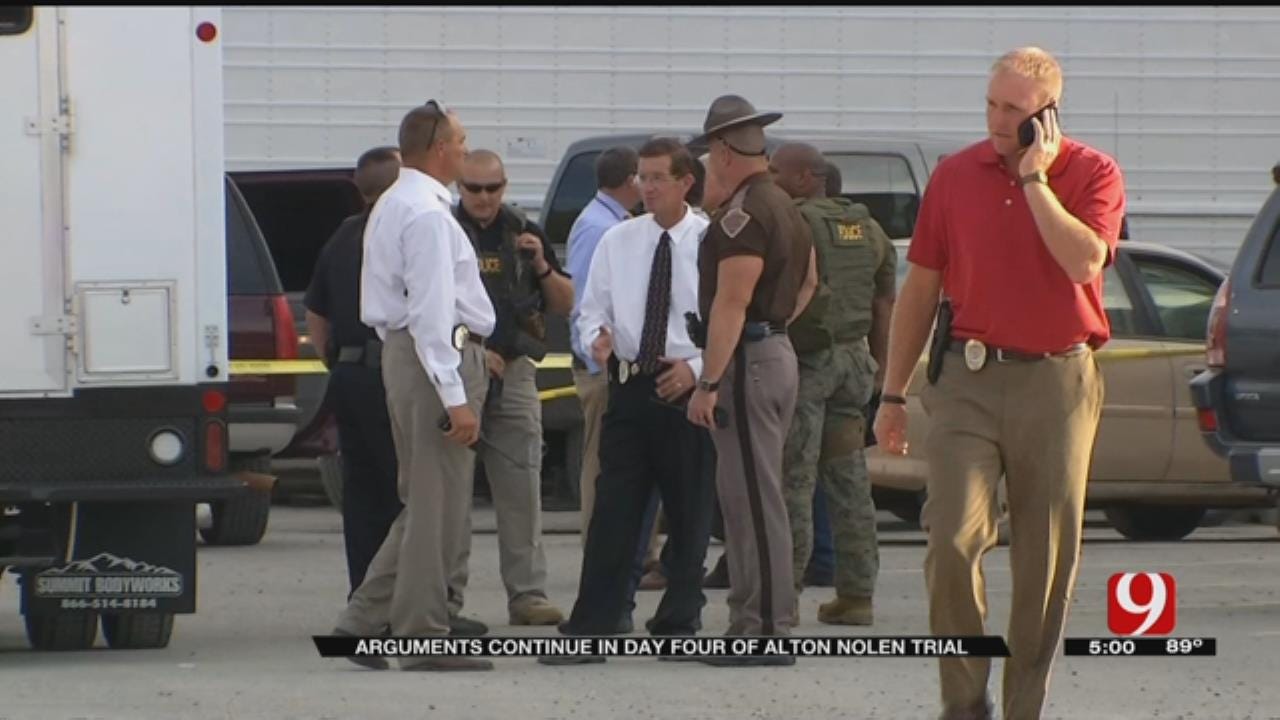 He's accused of first degree murder for beheading Colleen Hufford at Vaughan Foods in September 25, 2014. Nolen is also charged with one count of assault and battery with a deadly weapon and four counts of assault with a dangerous weapon.

The jury was selected and opening statements were done the day before.

The state called Gary Hazelrigg to the stand as the first witness. He works at Fresh Creative Foods, once called Vaughan Foods. He's been with the company for 22 years.

During the testimony, he remembers Colleen Hufford and points out where she sat. He said she was a customer service representative. Hazelrigg described Hufford as a very nice person, helpful and charitable. He said she was both a coworker and a friend. She was also a mother and a grandmother.

Hufford was in Hazelrigg's office on September 25, 2014. He describes seeing a blurry motion, and suddenly saw a man grab Hufford from behind with a large butcher knife around her throat. He goes into details about how Nolen beheaded Hufford.

Hazelrigg said he felt powerless when he tried to stop Nolen. "He was not to be moved," Hazelrigg said. At one point, he said Nolen went after him, but eventually went back to Hufford to finish the beheading.

"I was looking at something horrific, something people shouldn't have to see," Hazelrigg said. He was able to get on a 911 call and describe the suspect to dispatch. "I was shaking, trembling to say the least."

The second witness called by the prosecution team was Samuel Thurman, a former employee of Vaughan Foods. He was in the restroom when he heard commotion. When he came out and around the corner, Thurman remembers the scene. He pointed at Nolen as then man who was hurting Hufford.

Thurman said he hit Nolen on the right side of his face as hard as he could, but it hardly phased the suspect. He had to get more help.

He also remembered Hufford fondly. "Basically, she was the office mom," Thurman said. She would bring food and had a positive attitude. Thurman described her as "Care Bears and rainbows".

Prior to the incident, he recalled having one interaction with Nolen to discuss Nolen's attendance issues. It was less than five minutes long. Thurman never saw a concern with Nolen otherwise.

After lunch, Christi Stuard, Kay Auwen and Mark Vanderpool testified. They all worked at Vaughan Foods at the time of the incident.

The State called former coworkers to the witness stand in Alton Nolen's trial.