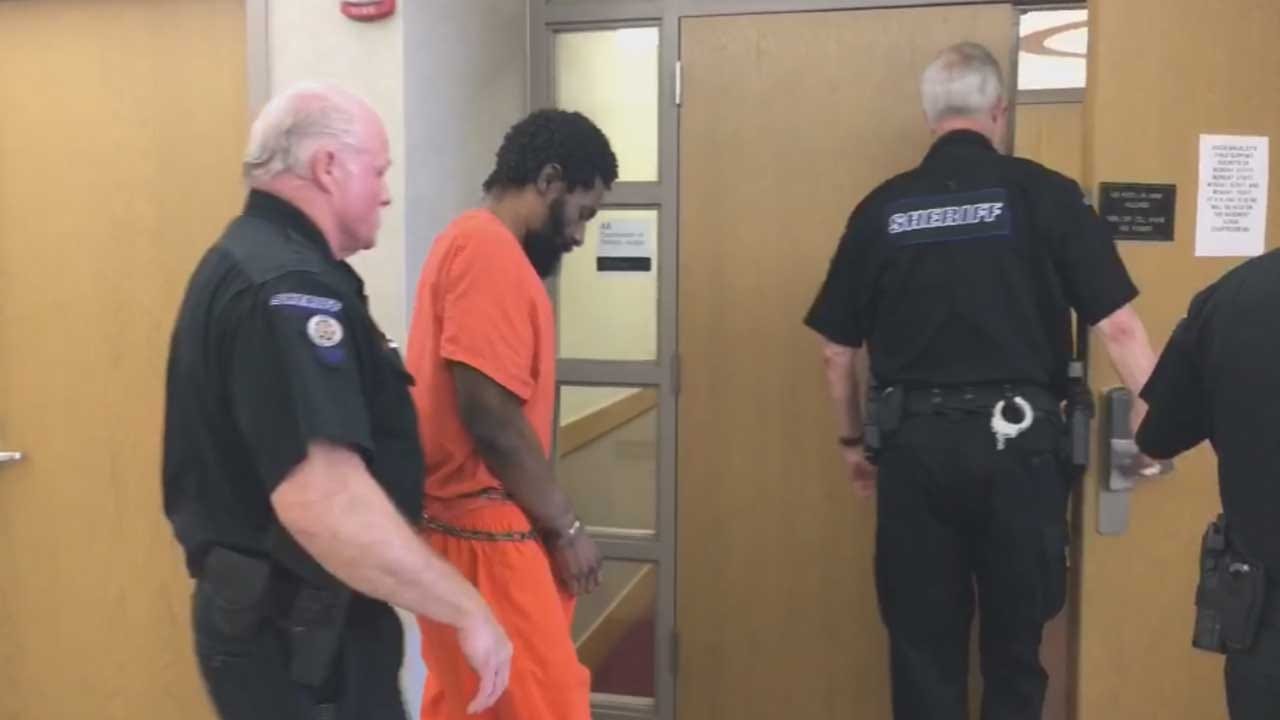 As of Monday, 15 witnesses have testified in Alton Nolen's trial.

Nolen, 33, is accused of beheading Colleen Hufford at Vaughan Foods in Moore in 2014. He is charged with first degree murder. He also faces an assault and battery charge for injuring Traci Johnson and four other assault charges on others.

On Monday, the state started off week two of the trial. The district attorney's team focused on the events and altercation that led up to the beheading incident.

Jeremy Hartman was called to testify. He worked at Vaughan Foods and knew Alton Nolen because they both worked in the same area. He said Nolen spoke often about being Muslim, but otherwise kept to himself. He knew Nolen went by a different name. He said "Jah'Keem or something".

On the afternoon of September 25, 2014, Hartman remembered an altercation between Nolen and Johnson. Hartman said, "I could hear him say, "I beat Caucasians.""

The state then called Latoya Nunley to testify. She worked a temp job at Vaughan Foods. She was working the bruschetta line with Nolen and Johnson when the altercation happened.

Nunley said she knew a few things about Nolen. He told her previously he converted to Islam the last time he was incarcerated.

Nunley had to file a statement about the fight between the Nolen and Johnson. She remembered people screaming and running out of the building after the attack.

Then, Tim Bluford was called as a witness. He was Nolen's supervisor and described him as an "overall average employee". He said Nolen had religious preferences and would leave the line to pray. He would also request for specific holidays off. Bluford said there was nothing unusual about Nolen.

On the fatal day, Bluford took the complaint from Johnson that she felt threatened by a racist comment. He told Human Resources that a threat had been made.

When the beheading incident happened, Bluford almost got in Nolen's path of terror. He saw Nolen attacking Johnson and tried to stop him by throwing a roll of labels at him. He said Nolen bolted toward him, but was quickly shot. Bluford then ran to help Johnson.

After Bluford's testimony, the state called Frazier. He was the widely known security guard at Vaughan Foods. He described the beheading victim, Colleen Hufford as a nice, kind lady. Frazier said he knew her husband. He would get to work at 5:00 am and leave at 4:00 pm.

On the afternoon of September 25, Frazier was called to escort Nolen off the property. He said he followed him out to the street. Frazier described Nolen's driving as normal. He also told the jury that he's known Nolen since he was a child. He went to church with Nolen's family and always saw him playing. They would have friendly conversation at Vaughan Foods. There were never any violent interactions before September 25.

The only non-employee to testify came next. Jimmy Deskin was Nolen's neighbor in Moore. He remembers Nolen tuning heavy and fast up to his apartment, and back down. He said Nolen got in his maroon Yukon and sped off down the road.

"He was making enough noise, it was vibrating the windows," said Deskin.

The prosecutors previously indicated Nolen went home to get a knife, the weapon he used during the attack.

Johnson remained calm on the stand as she recalled the events. She was only working at Vaughan Foods for four days when it happened. She said Nolen was "nagging" her all day until she was fed up and called him an "spoiled brat and lazy". She told the jury he told her that he hates white people and beats white people. Johnson immediately headed to Bluford's office to report it, in tears. She said the rest of the day, she did not interact with Nolen.

Johnson was getting ready to change in the locker room close to the end of her shift, when she heard "bloody murder screaming". She said she saw Colleen Hufford injured. Johnson was planning to change and sit with Hufford until help arrived, but she encountered Nolen.

Her jugular veins were damaged, her face and finger were cut.

Johnson said, "He was just going back and forth like he was just cutting a piece of meat."

Johnson remembered help coming and eventually hearing gun shots. She was escorted out to safety.

Next, Daniel Vreeland was called for his testimony. He was the security and safety manager at Vaughan Foods.

Vreeland received a phone call from Mark Vanderpool. "Dan, get over here. Someone just cut Colleen's throat," he remembered.

Vreeland said he made a call to Mark Vaughan, then COO of Vaughan Foods and an Oklahoma County Sheriff's Office Reserve Deputy. He and Vaughan went in to the danger.  He described seeing Nolen run toward them. Vreeland remembered the shots that put Nolen down, and using his baton to knock the knife away.

Then, there was Latosha Davis's emotional testimony. As she walked in, she glanced at Nolen and looked down. She said she was nervous, as the district attorney confirmed she was one of Nolen's original targets.

Davis worked in the Human Resources department at Vaughan Foods. She described interactions with Nolen before his request for religious accommodations. She said she needed to follow procedure, but the defendant was not happy with that. She described his tone as direct and said he called her disrespectful. She felt uncomfortable after several interactions with him and did not want to be alone when visiting with Nolen.

After the racial altercation between Johnson and Nolen, Davis determined that Nolen needed to be suspended. She said he turned in his badge and she wished him well.

Davis cried before the jury as she tried to cope with the emotions of what happened on September 25. After the attack, she couldn't go back to work at Vaughan Foods.

The final person to testify on Monday was the man who put a stop to the terror.

Mark Vaughan received a call from Daniel Vreeland to bring his gun. He suited up with his weapon, ammo and first aid on a vest.

Vaughan said they entered the building and he remembered seeing Nolen on top of Johnson, striking her with a weapon at least twice. He said he called for Nolen to stop. Nolen jumped up, ran around a corner and pounded back out, running at Vaughan and Vreeland at full speed. Vaughan said he fired three rounds in rapid succession.

Nolen leaned against the wall and fell to the ground. Vaughan waited until police cuffed him and took the suspect away.

Testimonies will continue Tuesday morning at 9:00 am. Follow Tiffany Liou @tliou on Twitter for live updates from the courtroom.

Some TPS Parents 'Scrambling' To Plan for 2020-21 School Year