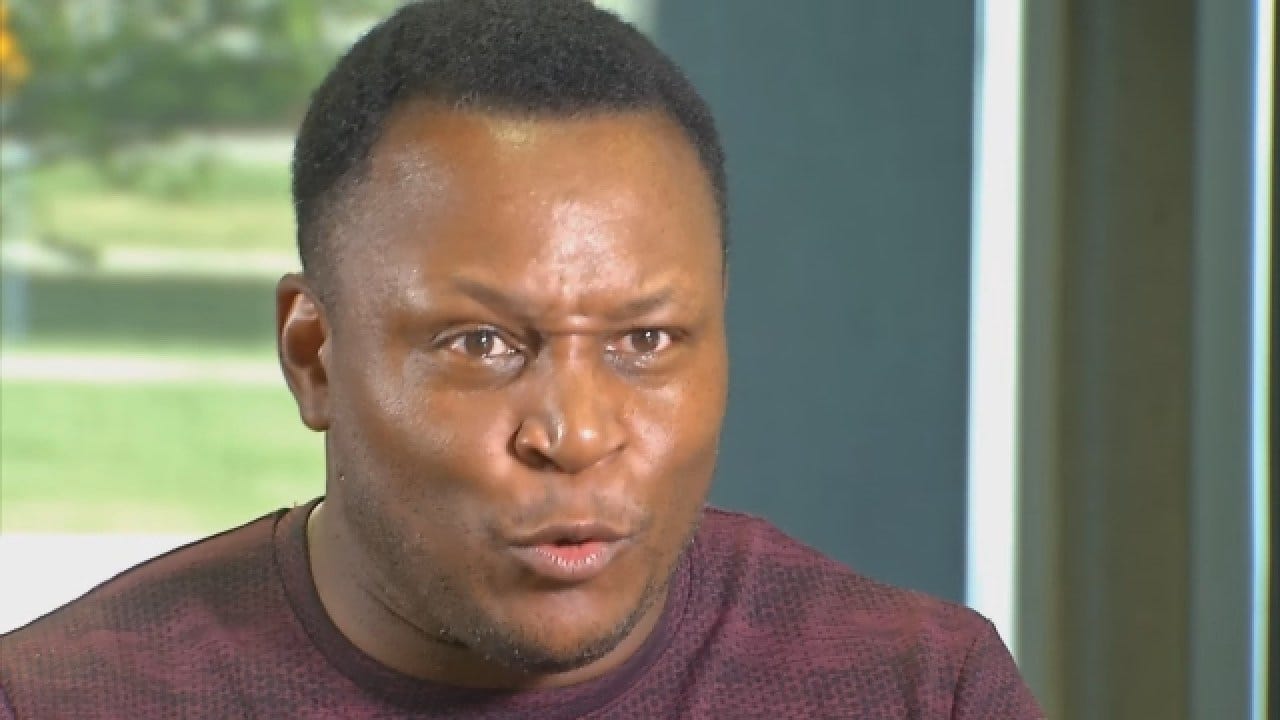 Barry Sanders is Oklahoma State University's first and only Heisman Trophy winner. His natural talent on the field proved he was born to run, breaking records no other player has been able to match.

"He is within 47 yards of Marcus Allen's single season rushing mark and Sanders still has one game to go. Ara, is there a chance this just locked up the Heisman for Sanders today?" sportscaster Jim Nantz asked.

"I think so. As you heard me earlier in the day he was my selection," said announcer Ara Parseghian.

Late November, 1988.  Three months earlier, Barry Sanders' name wasn't mentioned when it came to serious Heisman contenders, but it didn't take long that season for the nation to take notice.

"The first few games I just exploded. I don't know what my yards per carry average, was but it seemed like a touchdown or a big play every time I touched the ball," said Heisman trophy winner Barry Sanders.

Before we get ahead of ourselves, let's go back to where it started. Sanders, a high school standout in Wichita, chose OSU over Tulsa and Iowa State.

"I wanted to get away from home from my eight sisters or whatever it was, and for me there was nothing bigger than going away to play college football," he said.

"I've teased my friends about this, John - you didn't have to be an Oklahoma State coach to get on Highway 35 and drive north," said Pat Jones, former OSU head football coach.

"When I saw what he did in that freshmen scrimmage after being on campus two weeks in August of '85, I knew at that time, he was different than everybody else," said Head Coach Mike Gundy.

Sanders was dangerous enough to earn All-America honors as a kick returner his sophomore year. He also spent some time in the backfield with Heisman hopeful and future Hall of Famer Thurman Thomas in '87.

"I don't think long term it was going to work just because I know I wasn't at that point going to be able to block anybody as well as he would be able to, and he wasn't going to be moving to fullback," Sanders said.

With Thomas gone to the NFL, the stage then was set for Sanders' Heisman run the following season. And the head coach was doing his best to keep things calm by telling the media the Cowboys would be a "running back by committee" that fall.

"It wasn't going to be by committee - maybe it was by committee, John, but the chairman of that committee was wearing 21," Jones said.

"I had no expectations. That was exactly where I wanted to be, having a chance to start in the Big 8 Conference," said Heisman winner Barry Sanders.

That humble approach may have been in contrast to his dynamic play, but it is unmistakeably part of what makes Sanders special.

Jones: "Where does your humility come from?"

Sanders: "I don't think I had a choice. To answer your question - I think mom and dad."

"He would obviously toss or hand the ball to the official, would come by the huddle and pat each of the offensive linemen and the fullback on the head and then jog to the bench," Coach Jones said.

By the time Heisman Saturday rolled around, Sanders had already rushed for more than 2,000 yards. Most of the finalists were in New York for the announcement, but Sanders was with his team in Tokyo.

"I wasn't sure if I even wanted to participate in any of it," he said. "It just happened to fall on game day."

"We're gonna come on, announce the winner, but if it's Sanders we're going to pan the camera on him, OK. Basically just say thank you, and you guys are out of here," Sanders recalled.

"The 1988 winner is Barry Sanders," the announcer said.

"I looked composed but my heart was racing," Sanders said.

Pat Jones: "OK thanks Barry, thanks coach. We'll be back in a minute with a live interview from Barry Sanders."

Barry Sanders: "Let me go back and get some sleep and get ready for this game."

Pat Jones:  "And there's about 3 or 4 plugs in a wall so I'm thinking I can solve this deal. I just reach over and unplug - you work in TV, you know. I just unplugged a bunch of stuff, lights go off, I said 'come on Barry let's go.'"

Barry Sanders: "So many things changed for me in that moment, and I didn't want there to be a Heisman jinx."

There was no Heisman jinx.  Sanders ran for 344 yards in a close win over Texas Tech, then returned to Stillwater where Cowboy fans were ready to celebrate before heading to New York the following day for the Heisman dinner.

"I guess you seen I tried to escape earlier, but they made me stay," Sanders said at the Heisman dinner.

"I just remember going to New York and meeting my family there, and that's when it really like hits you, sort of a sign of things to come, you know, in a lot of ways," Sanders said.

"So I was trying to embrace it, but I was never someone who I guess got used to that much media attention, so that part definitely took some getting used to."

The Cowboys capped 1988 with a Holiday Bowl blowout of Wyoming. And Sanders' single season rushing total, without the bowl yards, still stands as the best in Division One football.

"It would have been like hitting 100 home runs, or a pitcher winning 50 games. He could've had 4,000 yards if we'd have just done it," said former OSU Head Football Coach Pat Jones.

"I had every intention of going back to school when I first won the Heisman, so fortunately my dad sat me down several times and told me how much of an idiot I would have been to go back to school, and that's just the kind of guy he was," Barry said.

Sanders left for the NFL and the Detroit Lions.  And after a decade of success he walked away from the game and into the Pro Football Hall of Fame in 2004.

"This is again, arguably the best back to ever play the game, period. At any level," Jones said.

John Holcomb, News On 6: "When somebody says that and describes you as the greatest of all time, what goes through your head?"

"It's a great compliment, and sometimes I don't always know how to react to it because I feel like I remember having that same conversation about the running backs that I loved to watch in my formative years. It almost sometimes feels like they're talking about someone else," Sanders said.