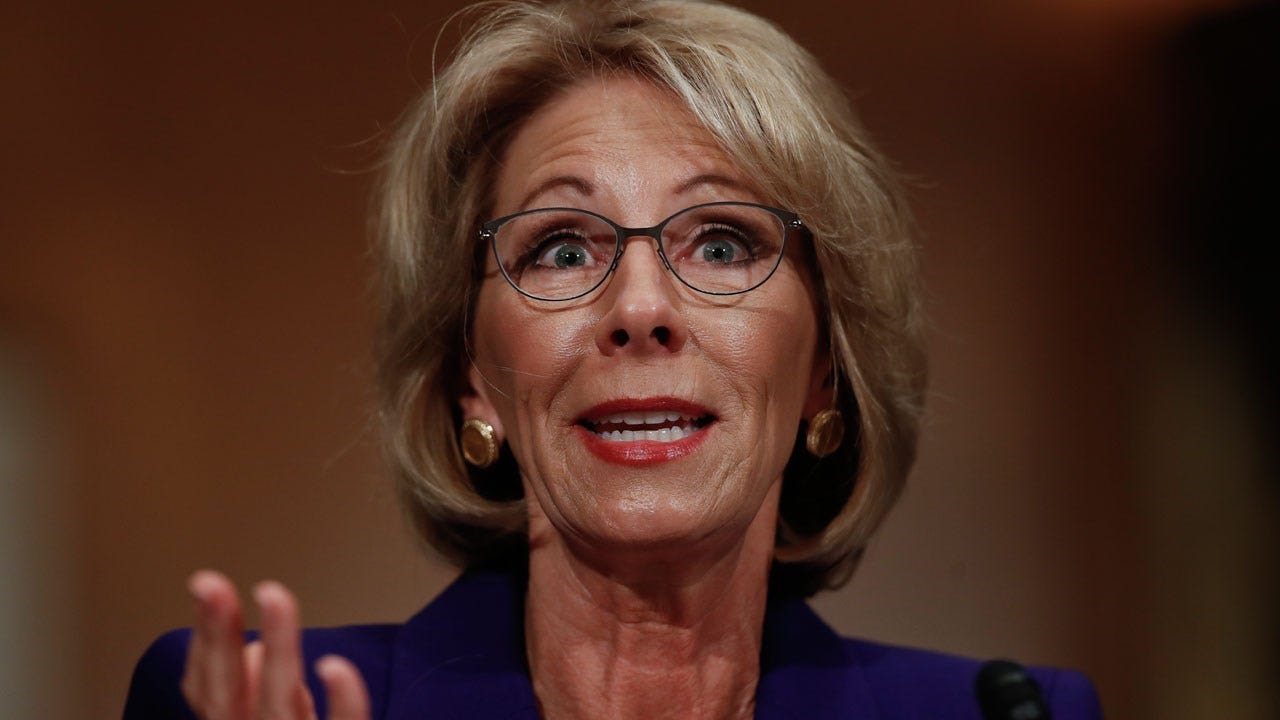 Education Secretary Betsy DeVos said Friday that she has “no intention of taking any action” regarding any possible use of federal funds to arm teachers or provide them with firearms training.

DeVos’ comments came after a top official in her department, asked about arming teachers, said states and local jurisdictions always “had the flexibility” to decide how to use federal education funds.

Frank Brogan, assistant secretary of elementary and secondary education, said arming educators “is a good example of a profoundly personal decision on the part of a school or a school district or even a state.” President Donald Trump and DeVos have said that schools may benefit from having armed teachers and should have that option.

DeVos said Friday that “Congress did not authorize me or the Department to make those decisions” about arming teachers or training them on the use of firearms.

Her comments were in a letter to Virginia Rep. Bobby Scott, the top Democrat on the House committee overseeing education, and were posted by the department on Twitter.

“I will not take any action that would expand or restrict the responsibilities and flexibilities granted to state and local education agencies by Congress,” DeVos wrote.

Democrats and education groups have argued, however, that the funds are intended for academics, not guns.

DeVos heads a federal commission on school safety that was formed after the deadly Valentine’s Day shooting at a Florida high school.

An early draft of the commission’s report recommends that states and communities determine “based on the unique circumstances of each school” whether to arm its security personnel and teachers to be able to respond to violence. The draft’s section on training school personnel was reviewed by AP.

That approach, the draft says, “can be particularly helpful” in rural districts where the nearest police unit may be far away. Other recommendations included employing school resource officers and ensuring they worked closely with the rest of the school staff.

In an interview with The Associated Press Thursday, Brogan cited the “school marshal” program in Texas where school employees can volunteer to carry weapons on campuses after undergoing training. Educators from some remote rural schools also told the panel that they rely on armed school personnel because the police may take too long to arrive. Others, however, argued that arming teachers is dangerous and could make schools feel like prisons.

Brogan said the Every Student Succeeds Act, a bipartisan law that shifts education authority to states, provides about $1 billion in annual funding for various school needs, including 20 percent specifically set aside for school safety.

“The people at the local level who’ve been there for years could make the decisions about what services to purchase, what equipment to buy to fulfill the general broad obligations laid out in that law,” he said.

It would be up to Congress, not the U.S. Department of Education, to place any restrictions or barriers to use those funds for purposes not currently in the law, a department spokeswoman said.

The debate arose earlier this month after a small rural school district in Oklahoma and the state of Texas asked the department to clarify what the funds can be used for.

“The position is: You have the language ... the language was written specifically to and always interpreted to mean ‘this is your money,’” Brogan said.

Democratic lawmakers and teachers blasted the idea, accusing the Trump administration of acting in the interests of the National Rifle Association, and several congressmen called for legislation that would prohibit the use of those funds for guns.

Senator Patty Murray, the top Democrat on the Senate commission overseeing education, said on Twitter that she was “extremely disappointed that (DeVos) is moving forward with this awful plan to allow federal funds to be used to arm teachers.”

“I hope she reconsiders and we need to keep pressure on her until she does,” Murray added.

Brogan also clarified that the commission will tackle gun control as instructed by the White House. DeVos had told a Senate hearing in June that the panel will not look at guns “per se,” causing confusion. Brogan said the commission will consider age restrictions for gun purchases, as well as whether people with mental health problems who are likely to harm themselves and others can possess weapons.

Brogan said the panel will produce a tool kit “that provides recognized best practices, not just the shiny new object on school safety, but what people are already doing that seems to be showing a track record of success that can be put out there in inventory fashion.”

“You cannot do that with a uniform approach to this thing because the country is so very different, place to place, school to school, state to state,” Brogan said. “There is no one way to make schools safe.”

Besides recommendations on arming and training school staff, the research and best practices identified by the panel will include suggestions on equipping schools with magnetometers and other safety tools, character development programs and the impact of video games and movies on violent behavior. The report will be issued in “very late fall or by the end of the year,” Brogan said.

The commission was created by President Donald Trump in March after 17 people were killed in the shooting at Marjory Stoneman Douglas High School in Parkland, Florida. The panel is chaired by DeVos and also consists of the heads of the departments of Justice, Health and Human Services and Homeland Security.