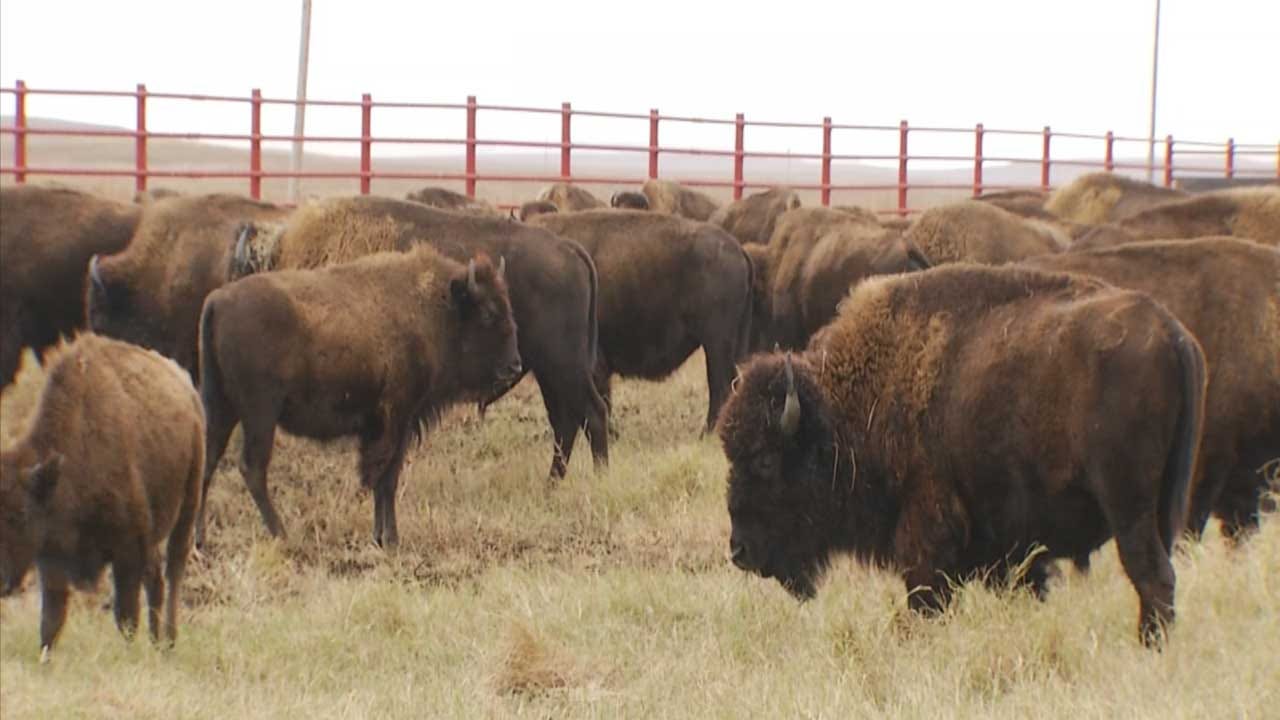 Life on the Tallgrass Prairie is usually pretty quiet, except for a few fast-paced weeks in the fall when the sound of a bison stampede sings across Osage county, followed closely by revved up diesel trucks blaring rock music.

"We try to have a little fun because it's a long, long process," Tallgrass Prairie Preserve ranch hand Perry Collins said.

Around there the days start when it's still dark and end well after the sun goes down, especially during the annual bison roundup, which is closed to the public.

This year marks the preserve's 25th roundup, where ranch hands like Collins corral the animals into pens for vaccinations. Some of the beasts don't mind, but others fight every step of the way.

"Some of the big bulls when they get in there and they squeeze [the chute] in and you can still hear the chute going squeak, squeak, squeak when they're breathing,'" said Collins.

But there's no time for fear with hundreds of bison waiting for a work up. Tallgrass Prairie Preserve Director Bob Hamilton says the process is vital to maintaining a healthy herd and a healthy prairie.

"We want to maintain habitat diversity and provide opportunities for all the different native plants and animals," Hamilton said.

For the tallgrass ecosystem to work properly, Hamilton says it must have a certain climate, prescribed burns and grazing bison. Historically, Hamilton says, all of those occurred together naturally.

"[The bison] evolved on the plains. The plains shaped them, and they shaped the plains in return," said former Preserve Director Harvey Payne.

Harvey Payne grew up on the prairie and spent many days roaming the vast countryside as child, dreaming of the way it used to be.

"I just thought it was the prettiest country in the world," Payne said. "You couldn't help but be up on top of one of these hills and just looking and thinking, 'What would this country have looked like with big herds of bison grazing on the prairie?' And I didn't think we'd ever see anything like this."

The land was much different then. It was far from flourishing - no bison, sparse wildlife, dwindling plant and broadleaf species.

Payne says at one point there were about 30 million bison in the United States, but by the late 1800s, bison were nearly eliminated.

"It's pretty sad to see what happened to the wildlife that we had here," he said. "The last recorded bison anyplace in the Tallgrass ecosystem was killed about 1851 in northern Osage County, which is where we are now."

When the bison were killed off, Payne says that put the prairie's existence in danger. He says the tallgrass ecosystem, that once stretched from southern Canada to the Gulf of Mexico, is almost all gone.

"White settlers came with cattle and fences and much more intensive grazing - it changed the plants communities," Payne said.

"The tallgrass as an ecosystem is the most threatened landform in the world, more so than the tropical rainforest," said Payne.

Payne has been a driving force in restoring the rolling hills to their original wonder. He calls the Tallgrass Prairie Preserve in Oklahoma 'a special chunk of land.' At nearly 40,000 acres, it's the largest piece of protected tallgrass prairie on earth.

Payne still remembers the foggy morning 25 years ago, when the prairie received its greatest gift to help preserve the past, 300 bison.

The Ken-Ada Ranch donated the bison herd in honor of their daughter, Christina.

"It's a huge success story," Payne said. "It's so great to see the pieces of what was a big puzzle put back together."

Now about 2,500 bison roam and graze freely on the prairie - quietly helping to bring back a precious piece of Oklahoma.

"We rolled the clock back and recaptured something that came so close to being extinct forever," said Payne.