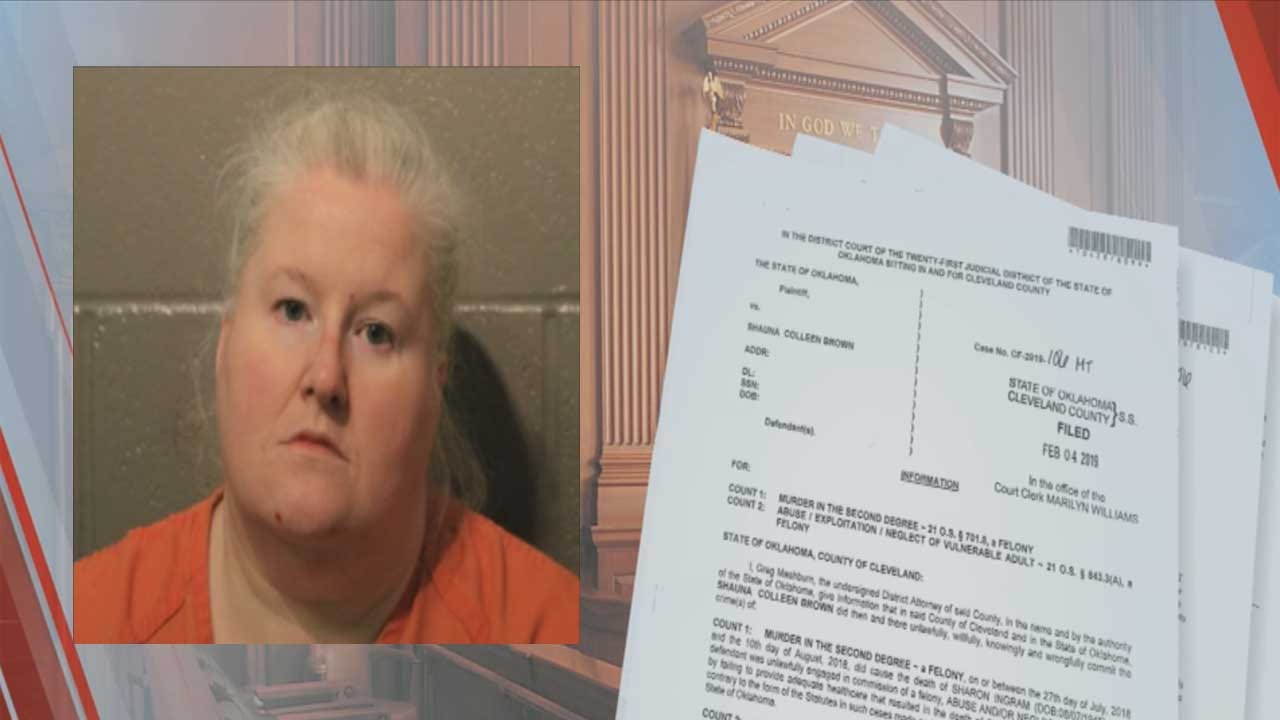 News 9 is learning more about the disturbing death of 73-year-old Sharon Ingram. Ingram died in August 2018, but her daughter, 45-year-old Shauna Brown, was charged with second-degree earlier this month.

Investigators said Ingram had severe bedsores, and that the medical examiner classified the cause of death as septic shock. Brown had been working as her mother’s live-in caretaker since early 2017, according to court documents.

Deputies said they were called to investigate the matter by Adult Protective Services around the time of Ingram’s death.

They released the following findings in Brown’s affidavit:

On May 23rd, 2018 Ingram was found wandering East Indian Hills Road, in Newalla.

A man stopped to help her and called 911.

Dispatch: “Does she need an ambulance?”

Caller: “Ma'am...Do you have any discomfort, or chest pain or anything.”

Ingram was taken to the hospital at that time. She had one wound that was bloody and one that had maggots inside, according to EMS staff.

In July of 2018, records state Ingram fell on the floor of her home, and Brown left her there for 12 days. Eventually, Ingram went unresponsive for 24 hours, and detectives said that's when Brown called for help.

Again, Ingram was taken to the hospital. She died less than two weeks later, and the Oklahoma State Medical Examiner identified the cause as “septic shock”.

The Brown/Ingram home was described by investigators as horrid. Detectives said they found mounds of trash, animal feces, rotting food, and insects.

News 9 sat down with Adult Protective Services to ask if Ingram’s death could have been prevented. They said they didn’t know.

At the time Adult Protective Services visited the home, they say, they did not have suspicions of abuse.

“APS did not have reason to know that the daughter was involved in abuse,” said Director of APS Gail Wettstein.

Often times, when APS is called to investigate, they consult the victim on what their wishes are going forward. Unless someone is unable to competently communicate their wishes, APS respects the decision made by the client.

“As part of our process, we would discuss with a person, do you have any risks or needs? How would you like to have those met? Are you aware of what will happen if those needs aren't met?” said Wettstein.

“If we see someone, at the time of the investigation, is at risk of imminent death or serious harm, we can go to the court and ask for a guardianship. In order for a court to grant us a guardianship, the judge would have to find the person lacked the capacity to consent to protective services,” continued Wettstein.