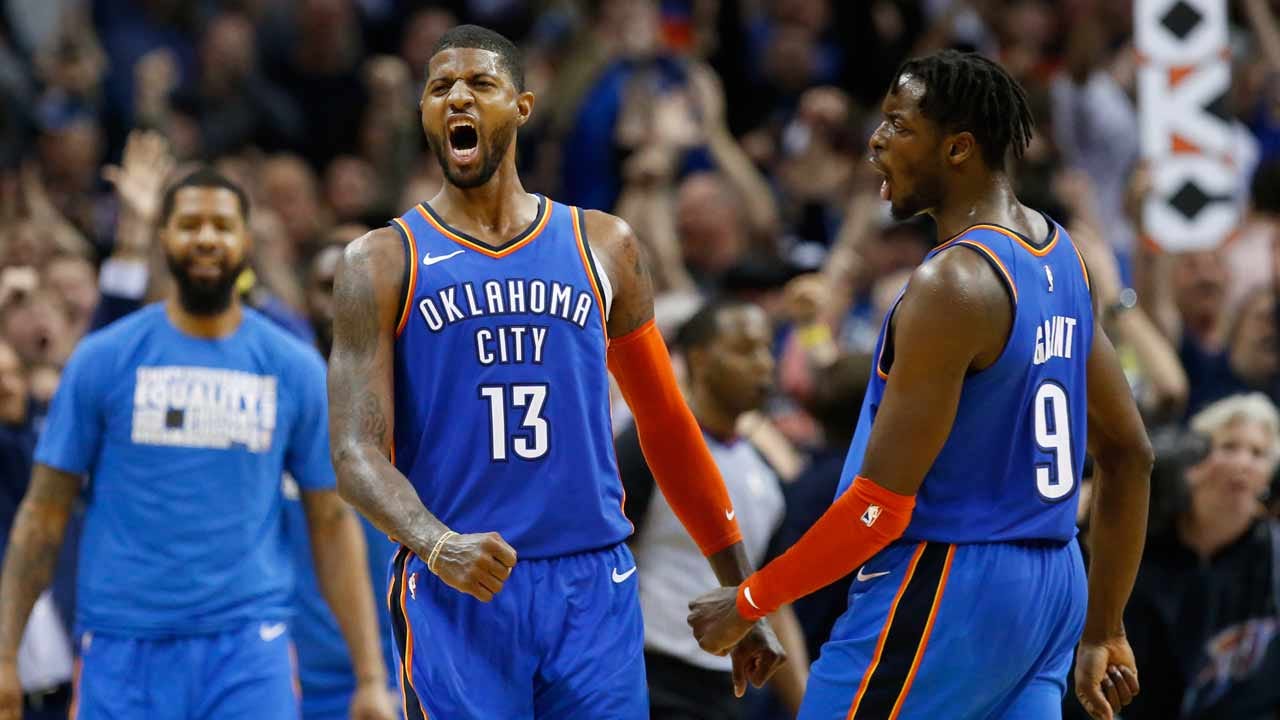 OKLAHOMA CITY (AP) - Paul George floated in a basket with less than a second remaining in double-overtime, capping a 45-point night with the winning shot in the Oklahoma City Thunder's 148-147 victory over the Utah Jazz on Friday.

George dribbled out the final seconds before driving between two defenders and floating in a shot with 0.8 seconds left. Kyle Korver got off a desperate 3 for Utah, but it went long as the buzzer sounded.

The game went to overtime after the Thunder's Jerami Grant completed a tying three-point play, then blocked Mitchells shot at the other end. Grant had 18 points.

In the first overtime, Abdel Nader hit a 3-pointer to give the Thunder a 139-137 lead in the final minute after Westbrook and Terrance Ferguson had fouled out. Utah's Rudy Gobert tipped in the tying basket with 33.7 seconds left, and George and Mitchell eached missed jumpers in the closing seconds.

Gobert hit two free throws with 1:10 left in the second overtime for a 147-146 lead, but Utah went cold from there. Mitchell's driving shot off the glass missed the rim, and Joe Ingles missed on a long 3-point try as the shot clock expired with 13.2 seconds left.

Steven Adams played a game-high 47 minutes for Oklahoma City, returning from a pre-All-Star break ankle injury to score 16 points and grab 10 rebounds to go along with five steals.

The teams were physical throughout. Westbrook got a flagrant foul for crashing into Gobert while defending a layup, and there was a fracas late in the first half after Jae Crowder fouled the Thunder's Dennis Schroder.

Thunder: Oklahoma City scored at least 115 points for the 19th straight game, passing the Cincinnati Royals for the second longest such streak in NBA history. The Denver Nuggets hold the record with 22 straight. ... Oklahoma City swept the season series against Utah. ... The Thunder have won seven straight at home.

WELCOME TO THE THUNDERDOME

Markieff Morris received a rousing round of applause when he made his first appearance on the court for the Thunder. Morris, signed as a free agent Wednesday, checked in 3 1/2 minutes into the first quarter after Grant picked up two quick fouls, but was ineffective in his first stint. He played the rest of the quarter without taking a shot or grabbing a rebound, picking up two fouls of his own. He played 17 minutes, missed his only shot and had two assists.

Copyright 2019 The Associated Press. All rights reserved. This material may not be published, broadcast, rewritten or redistributed.