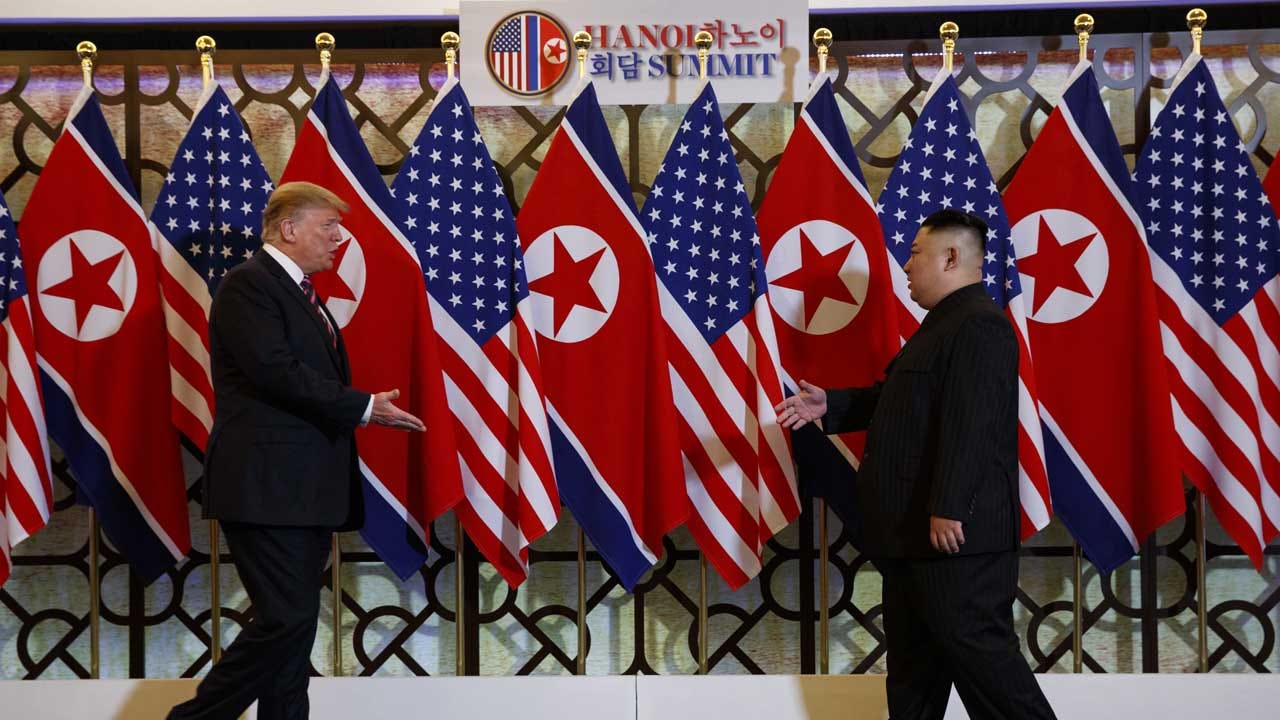 U.S. President Donald Trump and North Korea’s Kim Jong Un, leaders of two nations with a long history of hostility, opened their second summit Wednesday with smiles, hopeful talk and a friendly dinner that will set the stage for the much more difficult talks to come about curbing North Korea’s pursuit of nuclear weapons.

Facing widespread skepticism about whether they can solve a problem that has bedeviled generations of diplomats and officials, the two men exchanged a warm handshake before a phalanx of alternating American and North Korean flags before disappearing for a private, 30-minute pre-dinner chat.

“A lot of things are going to be solved I hope,” Trump said as dinner began. “I think it will lead to a wonderful, really a wonderful situation long-term.”

Kim, for his part, said that his country had long been “misunderstood” and viewed with “distrust.”

“There have been efforts, whether out of hostility or not, to block the path that we intend to take,” he said. “But we have overcome all these and walked toward each other again and we’ve now reached Hanoi after 261 days” since their first meeting in Singapore.

“We have met again here and I am confident that we can achieve great results that everyone welcomes.”

For all of the optimistic talk in front of the cameras, there was broad concern that Trump, eager for an agreement, would give Kim too much and get too little in return — perhaps a peace declaration for the Korean War that the North could use to eventually push for the reduction of U.S. troops in South Korea, or sanctions relief that could allow Pyongyang to pursue lucrative economic projects with the South.

A deal like this, skeptics say, would leave in place a significant portion of North Korea’s nuclear-tipped missiles while robbing the United States of its negotiating leverage going forward: If the North has already gotten a good deal of what it wanted, and kept part of its nuclear program, what would be the point of giving up the rest?

Asked if this summit would yield a political declaration to end the Korean War, Trump told reporters: “We’ll see.”

As Trump reached for a summit victory abroad, back in Washington his former personal attorney, Michael Cohen, was prepared to deliver explosive testimony on Capitol Hill that the president is a “racist,” a “conman” and a “cheat.” Unable to ignore the drama playing out thousands of miles away, Trump tweeted that Cohen, who has been sentenced to three years in prison for lying to Congress, “did bad things unrelated to Trump” and “is lying in order to reduce his prison time.”

Anticipation for what could be accomplished at the summit ran high in Hanoi, and there were cheers and gasps as Trump’s motorcade barreled through this bustling city, with crowds three or four deep lining the streets and jockeying to capture his procession with their mobile phones. But the carnival-like atmosphere in the Vietnamese capital, with street artists painting likenesses of the leaders and vendors hawking T-shirts showing Kim waving and Trump giving a thumbs-up, contrasted with the serious items on their agenda: North Korea’s nuclear weapons program and peace on the Korean Peninsula.

Trump has been trying to convince Kim that his nation could thrive economically like the host country, Vietnam, if he would end his nuclear weapons program.

The summit venue, the colonial and neoclassical Sofitel Legend Metropole in the old part of Hanoi, came with its own dose of history: Trump was trying to talk Kim into giving up his nuclear arsenal at a hotel with a bomb shelter that protected the likes of actress Jane Fonda and singer Joan Baez from American air raids during the Vietnam War.

Trump and Kim first met last June in Singapore, a summit that was long on historic pageantry but short on any enforceable agreements for North Korea to give up its nuclear arsenal. North Korea has spent decades, at great economic sacrifice, building its nuclear program, and there are doubts that it will give away that program without getting something substantial from the U.S.

The Korean conflict ended in 1953 with an armistice, essentially a cease-fire signed by North Korea, China and the 17-nation, U.S.-led United Nations Command. A peace declaration would amount to a political statement, ostensibly teeing up talks for a formal peace treaty that would involve other nations.

North and South Korea also want U.S. sanctions dialed back so they can resurrect two major symbols of rapprochement that provided $150 million a year to the impoverished North by some estimates: a jointly run factory park in the North Korean border city of Kaesong and South Korean tours to the North’s scenic Diamond Mountain resort.

Ahead of the private dinner, White House press secretary Sarah Sanders excluded some U.S. reporters, including The Associated Press, after reporters asked questions of Trump during a previous photo opportunity. “Due to the sensitive nature of the meetings we have limited the pool for the dinner to a smaller group,” she said in a statement.