In ‘Lawless’ World Of Service Dogs, Many Families Suffer 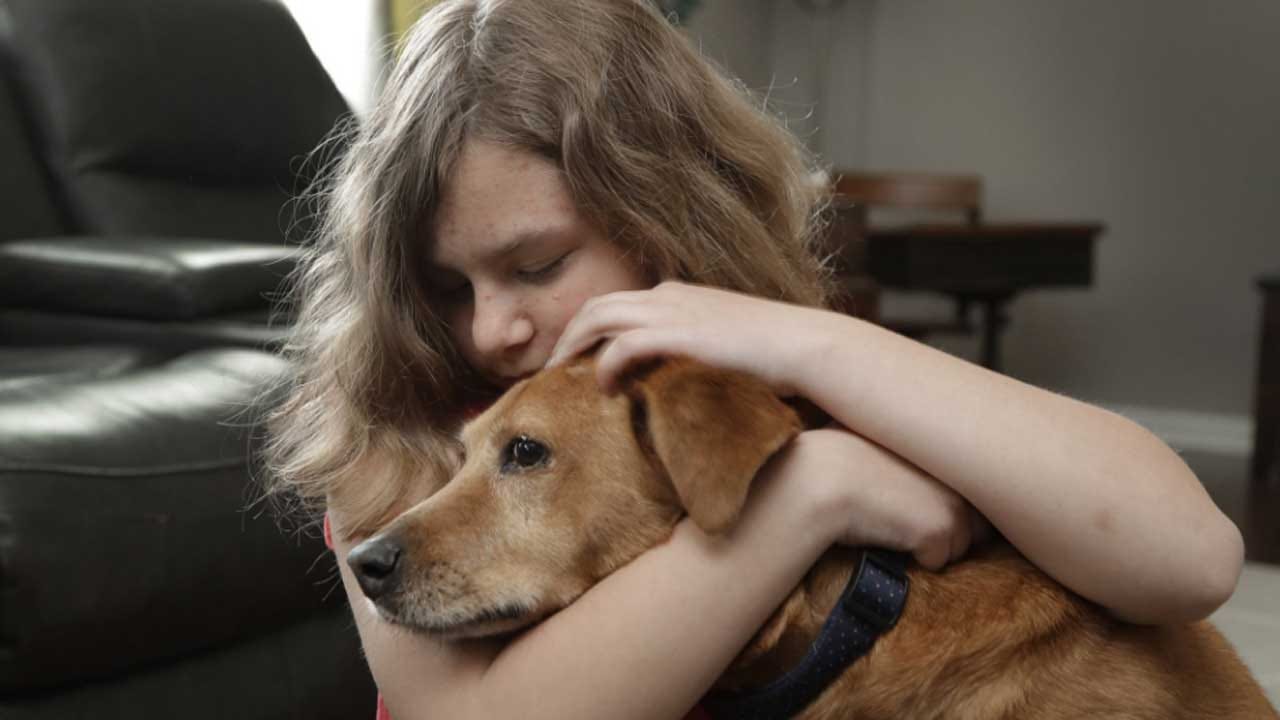 All the counseling, therapy and medication did little to ease 9-year-old Sobie Cummings’ crippling anxiety and feelings of isolation. And so a psychiatrist suggested that a service dog might help the autistic child connect with other kids.

To Glenn and Rachel Cummings, Mark Mathis seemed like a dream come true. His kennel, Ry-Con Service Dogs, was just a couple of hours away, and he, too, had a child with autism. But what clinched the decision were Mathis’ credentials.

“Is Ry-Con a certified program? Yes,” stated an online brochure. “In 2013, Mark was certified as a NC state approved service dog trainer with a specialty in autism service dogs for children.”

Ten months and $14,500 later, the family brought home a shaggy mop of a dog that Sobie had come to view as her “savior.” But when they opened the front door, Okami broke from Glenn Cummings’ grasp and began mauling one of the family’s elderly dogs — all as Sobie watched from the stairs in mute horror.

It was only after they had returned Okami and asked for a refund that the family learned the truth: Mathis was not a state-certified dog trainer. In fact, North Carolina has no such certification program — and neither does any other state.

The service dog industry — particularly in the field of “psychiatric” service dogs for people with autism and post-traumatic stress disorder — has exploded in recent years. But a near complete absence of regulation and oversight has left needy, desperate families vulnerable to incompetence and fraud.

“It is a lawless area. The Wild West,” says David Favre, a law professor at Michigan State University and editor of its Animal Legal and Historical Center website.

Properly training a service dog can take up to 1 ½ years and cost upward of $50,000, depending on the tasks it is taught to perform. But the Americans with Disabilities Act does not require that a service dog be professionally trained or certified. And, according to the U.S. Department of Justice , local and state agencies are prohibited from requiring that the dogs be registered.

“It needs to be specially trained to do tasks that relate to the person’s disability, but it doesn’t say anything about who does the training or the quality of training or the efficacy of it,” says Lynette Hart, a professor of veterinary medicine at the University of California, Davis. “So it’s a very broad, wide-open barn door.”

The ADA allows people to train their own service dogs. But Hart, who has co-authored studies of the industry, says most don’t have the time, wherewithal or confidence to do so, and that puts needy families “in a calamitous situation.” ″They’re easy prey,” says Hart, whose late brother had autism.

In 2012, the state of Illinois sued Lea Kaydus and Animals for Autism over a “heartless scam” in which she took several thousand dollars from families but never matched them with dogs. Kaydus was ordered to pay restitution.

And last year, Virginia Attorney General Mark Herring filed suit against Service Dogs by Warren Retrievers Inc., which advertises dogs trained to help people suffering from diabetes, PTSD, seizure disorders and autism. The lawsuit alleges that the diabetes-alert dogs, for which Warren charged up to $27,000, “were often poorly trained, ill-behaved, and unequipped to help manage a life-threatening situation, rendering them little more than incredibly expensive pets.”

Attorneys for owner Charles D. Warren Jr. say the state’s case is based on the complaints of “a few disgruntled and fanatical consumers” who “cannot be satisfied and refuse all attempts at accommodation and reason.” A trial date has not been scheduled.

Mathis, a biotech engineer, founded Ry-Con after his older son, who is autistic, was successfully paired with a service dog. “It was remarkable,” Mathis told a local magazine several years ago. “We had a new child.”

Incorporated in 2014, Ry-Con worked exclusively with Briards — a long-haired French herding breed that can weigh anywhere from 55 to 100 pounds. The American Kennel Club site says the Briard “packs so much loyalty, love, and spirit into its ample frame that it’s often described as a ‘heart wrapped in fur.’”

In a May 2017 news release, Mathis claimed that Ry-Con — based in Apex, just southwest of Raleigh — was the largest provider of autism service dogs on the East Coast and boasted a “100% success rate.”

There aren’t a lot of programs that specialize in training dogs for children with autism, so the Cummings family felt lucky to find one so close to home.

The Charlotte couple searched online and found positive local news articles, as well as a profile of Ry-Con by CNNMoney. Mathis’ website was loaded with glowing testimonials.

And then there was the state certification.

“For us to see that he had the backing of the state ... was huge,” Rachel Cummings says.

The couple contacted Ry-Con in July 2017. Within days, Mathis called to say he had the perfect dog for Sobie, even though he’d not met her and his contracts promised Ry-Con would “hand select a puppy for the (consumer).” Rachel Cummings says she found that odd but: “I was blinded by hope.”

Mathis sent them a photo. Sobie decided to name her new friend after the Japanese word for her favorite animal — the wolf.

Several months later, the family traveled to Apex to meet the dog. She was still a puppy and had not yet undergone training, but Sobie got to spend time with her. Her mother tears up picturing her daughter beaming as she and Okami played at a park.

“Her life has been not the easiest ... being bullied and wanting friends desperately,” she says. “And so it was just a beautiful thing to see.”

Sobie plastered her walls and school folders with photos of Okami. She kept a framed picture of the dog beside her bed, hugging and kissing and talking to it before going to sleep.

But on subsequent visits, Cummings says, Okami did not seem to be progressing.

The International Association of Assistance Dog Partners says a service animal should have a minimum of 120 hours of schooling over six months or more. The dog must respond to basic commands — “Sit, Stay, Come, Down, Heel” — and be able to work without exhibiting “aggressive behavior toward people or other animals.”

Studies have shown that up to half wash out of training.

During training trips to local stores, Okami pulled at her leash and refused to lie down. At a mall, she growled and lunged at people, and defecated in a hallway.

Still, Sobie and the dog had bonded, and the family hoped more training would smooth out the rough edges. Okami “graduated” last May; the family brought her home Mother’s Day weekend.

Cummings says her two dogs were lying in the front hall when Okami attacked, unprovoked. She says it took both her and her husband to pry the Briard’s jaws from the other dog’s throat.

When Mathis refused to refund their money, they sued. They were unaware that they weren’t the first to have issues with Ry-Con.

In November 2017, Christian and Shannon Poirier say the dog Mathis sold them bit their 11-year-old son Daniel, who has autism. After repeated requests for a refund, they sued him in small claims court and won.

The Cummings case never got that far.

Last Nov. 13, Mathis sent an email to clients announcing he was closing down. At the time, he had about 40 dogs in training. He said the operation was no longer sustainable, blaming “issues with accounts receivables, and a select number of recently returned dogs and the unfortunate response that followed.”

The following day, he filed for bankruptcy protection.

Some customers claimed they arrived at Ry-Con to find dogs emaciated, skittish and matted with urine and feces. Many said their pups lunged and nipped at children and other animals, weren’t housetrained and could not respond to basic commands.

Nancy Evans says her 19-year-old daughter, Katie, had waited over a year for her dog, Bailey. Katie suffered from PTSD and anxiety so severe that she could not even take the bus by herself. Once home with them in Toronto, the dog showed extreme aggression toward Katie’s older brother. An expert who examined Bailey declared her unfit for service, and a Briard rescue group took her away.

About a month after losing Bailey, Katie committed suicide. Her mother is convinced things would have been different had Bailey worked out. “My Katie would still be alive today if we had been given a trained service dog,” Evans says.

Stein’s office has received more than four dozen complaints against Ry-Con. In a response to one, Mathis accused clients of breaking their contracts, falling behind on payments or misrepresenting conditions in their homes, and suggested that some were attempting to blackmail him.

In an email to The Associated Press, he insisted that his troubles all stemmed from recent financial issues.

“Some of (the dogs) had to go home earlier than their original planned graduation,” Mathis wrote. “Some of them went home on time but aftercare support was not immediately available. ... This is not the same as selling untrained dogs, and certainly not a willful act or scam.”

However, the state attorney general alleges that Mathis not only misrepresented his credentials but also falsified breeder information, providing some families animals that were trained primarily as police or security dogs, not service dogs. Stein’s office also contends that Mathis may have siphoned as much as $240,000 of the nonprofit’s money for personal expenses, including groceries, haircuts and video games.

Meanwhile, Stein said the families are out more than $950,000 — money he will try to recover. “Most if not all of the consumers had no prior experience with service dogs or the training of service animals. They therefore had no expectations as to how the industry operated,” the complaint states.

Mathis declined to respond to allegations of inflated credentials and success rates, instead referring the AP to several satisfied clients.

Scott Gordon of Rolesville, North Carolina, turned to Mathis for help with his 6-year-old son, Beckett, who has autism. He says Zuzu was a perfect fit.

“I used to have to lay down with him for at least 45 minutes to get him to fall asleep,” he says. “Now, I kiss them both good night, and off he goes to sleep.”

Whitney Reynolds says a touch or a lick from their Briard, Cosette, can stop one of her 7-year-old son’s meltdowns cold. “She’s a blessing,” the Cary, North Carolina, woman says.

But to the Cummings family and others, Ry-Con has been a curse.

Rachel Cummings says Sobie didn’t leave her room or eat for several days after the attack; a doctor has diagnosed the little girl with PTSD.

One day, Cummings found an empty picture frame under her daughter’s bed. Sobie had torn the photo of Okami into tiny pieces, locked them in a keepsake box and thrown away the key.

“Her life is not what it was,” her mother says. “The light’s not back in her eyes yet.”

And what became of Okami? Rachel and Glenn Cummings learned that Mathis had sold her to another family, with similar results.

That family has also filed a complaint.