Imelda Leaves 3 Dead In Texas, Others Stranded And Trapped 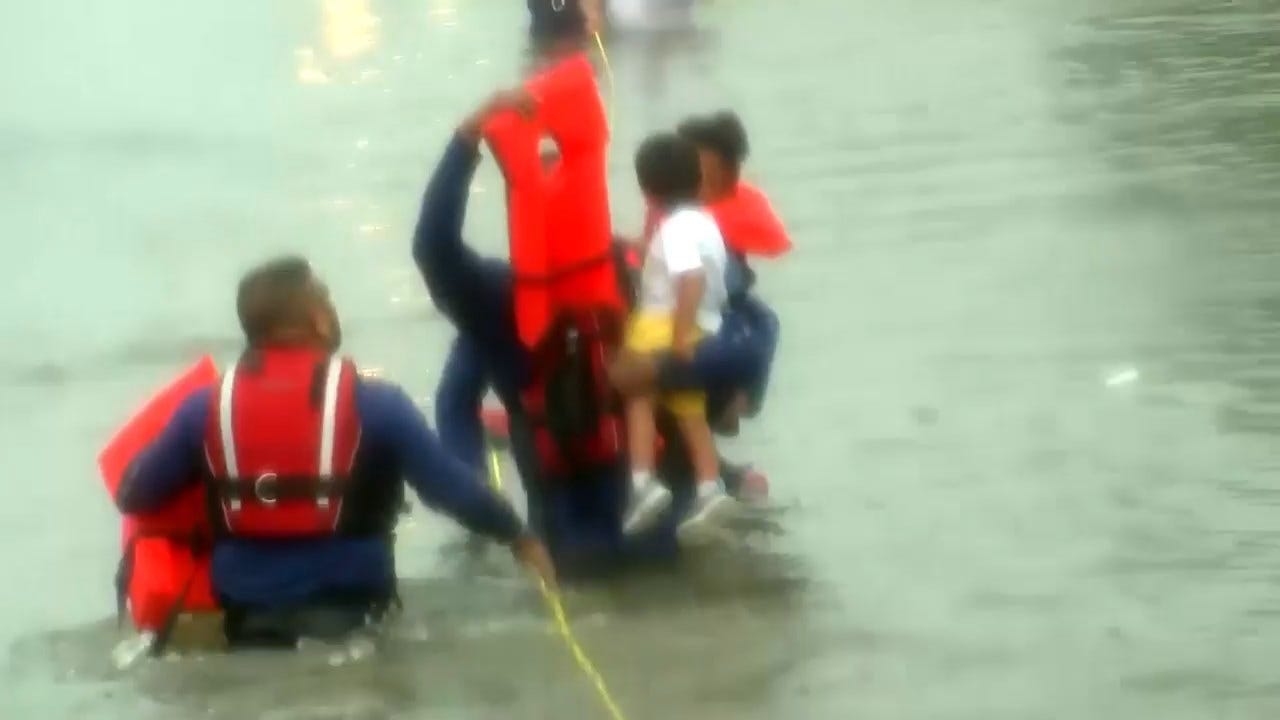 Emergency crews in the Houston area took advantage of receding floodwaters Friday to begin to assess the damage from one of the wettest tropical cyclones in U.S. history, a storm that led to deaths of three men and displaced hundreds of people from their homes.

The aftermath from Tropical Storm Imelda, which drew comparisons to Hurricane Harvey two years ago, was blamed for major travel headaches as motorists slogged through water-swollen streets and air travelers faced flight delays and cancellations.

Nine barges broke free of their moorings, and Interstate 10 over the San Jacinto River was closed in both directions when two of the barges struck the bridges early Friday. Nearly 123,000 vehicles normally cross the bridges each day, according to the Texas Department of Transportation.

The heaviest rainfall had ended by Thursday night in southeast Texas, but forecasters warned that parts of northeast Texas, Arkansas, Oklahoma and Louisiana could see flash flooding as Imelda’s remnants shifted to the north.

Officials in Harris County, which includes Houston, said there had been a combination of at least 1,700 high-water rescues and evacuations to get people to shelter as the longevity and intensity of the rain quickly came to surprise even those who had been bracing for floods. The storm also flooded parts of southwestern Louisiana.

More than 900 flights were canceled or delayed in Houston on Thursday. Further along the Texas Gulf Coast, authorities at one point warned that a levee could break near Beaumont in Jefferson County. During Harvey, Beaumont’s only pump station was swamped by floodwaters, leaving residents without water service for more than a week.

Imelda’s remnants on Thursday led to the deaths of two men. A 19-year-old man drowned and was electrocuted while trying to move his horse to safety, according to a message from his family shared by the Jefferson County Sheriff’s Office. Crystal Holmes, a spokeswoman for the department, said the death occurred during a lightning storm.

A man in his 40s or 50s drowned when he tried to drive a van through 8-foot-deep floodwaters near Bush Intercontinental Airport in Houston during the Thursday afternoon rush hour, Harris County Sheriff Ed Gonzalez said.

The third death was that of a man whose body was found in a ditch Friday north of Houston, Harris County sheriff’s spokesman Jason Spencer said. Preliminary indications are that the unidentified man drowned.

The National Weather Service said preliminary estimates suggested that Jefferson County was deluged with more than 40 inches (102 centimeters) of rain in a span of just 72 hours, which would make it the seventh-wettest tropical cyclone to hit the continental U.S.

“The issue is that you can’t get 40 inches of rain in a 72-hour period and be fully prepared for that,” Jefferson County spokeswoman Allison Getz told The Associated Press on Friday. “At this point we haven’t been able to fully assess what’s happened.”

Getz said dozens of people have traveled to the county with boats in tow from Louisiana and other parts of Texas to assist with rescue efforts, an outpouring of support reminiscent of volunteer efforts during Harvey.

In nearby Chambers County, preliminary estimates indicate about 800 homes and businesses sustained some level of damage from floodwaters, county spokesman Ryan Holzaepfel said. Emergency personnel rescued about 400 people during the deluge, mostly from homes, he said.

Emergency crews on Thursday evacuated 87 residents from a nursing home in Porter, northeast of Houston, as floodwaters began to seep into the home, according to Meghan Ballard, spokeswoman for the Montgomery County Office of Emergency Management. The residents of Pine Shadow Retreat were taken to one of six separate nursing homes or senior living centers where they will be housed temporarily, Ballard said. No injuries were reported as part of the evacuation effort.

Even when Houston was finally rid of the worst, downtown highways remained littered with abandoned cars submerged in water. Thousands of other drivers were at a practical standstill on narrowed lanes near flooded banks.

“The water kept rising. It kept rising. I couldn’t believe it,” said Ruby Trahan Robinson, 63. She uses a wheelchair and had a portable oxygen tank while getting settled into a shelter at City Hall in the small town of China, just outside Beaumont.

Turner, the Houston mayor, evoked the memory of Harvey — which dumped more than 50 inches (127 centimeters) of rain on the nation’s fourth-largest city in 2017 — while pleading with residents to stay put. City officials said they had received more than 1,500 high-water rescue calls to 911, most from drivers stuck on flooded roads, but authorities described a number of them as people who were inconvenienced and not in immediate danger.

Ahead of the evening rush hour, Houston officials urged commuters to stay in their offices for an extra three to four hours rather than embark on flooded and already jammed highways. Turner made a similar appeal to parents of schoolchildren as the Houston Independent School District — Texas’ largest with more than 200,000 students — did not cancel classes or shorten the day unlike neighboring districts in the path of the storm. The district canceled Friday classes.

Imelda is the first named storm to impact the Houston area since Harvey hovered for days and inundated the flood-prone Gulf Coast. That storm dumped more than 5 feet (1.5 meters) of water near the Louisiana border, and two years later, it looked in some places like Harvey was playing out all over again.

In Winnie, a town of about 3,200 people 60 miles (95 kilometers) east of Houston, a hospital was evacuated.

Cory Stottlemyer, spokesman for Houston’s Office of Emergency Management, said floodwaters in the city Friday were receding and that fewer 911 calls were being made. But even as the intensity of the storm weakened, Harris County officials warned that some of their 4.7 million residents might not see high waters recede in their neighborhoods until the weekend.

Following Harvey, Texas Gov. Greg Abbott ordered a report warning that punishing storms would become more frequent because of a changing climate. Scientists say climate change is responsible for more intense and more frequent extreme weather such as storms, droughts, floods and fires, but without extensive study they cannot directly link a single weather event to the changing climate.

Climate change skepticism runs deep among Republican leaders in Texas, and Abbott has said it’s “impossible” for him to say whether he believes manmade global warming is causing the kind of disasters the state is telling residents to get used to. Earlier this year, Abbott approved billions of new dollars to fortify the Texas coast and reduce catastrophic flooding.

The flooding from Imelda came as Hurricane Humberto blew off rooftops and toppled trees in the British Atlantic island of Bermuda, and Hurricane Jerry was expected to move to the northern Leeward Islands on Friday and north of Puerto Rico on Saturday. In Mexico, people in Los Cabos were preparing for Hurricane Lorena’s arrival.

Tulsa Police Investigating After One Person Shot During Armed Robbery

CBS News In a historic first for the U.S. space program, a spacecraft designed, built, owned and operated by a private company — SpaceX — blasted off Saturday with two NASA astronauts aboard — the first purely private sector launch to orbit in space history. It was also the first launch of a crew from U.S. soil since the space shuttle program ended nearly nine years ago.

World Alarmed By Violence In US; Thousands March In London

Associated Press World Alarmed By Violence In US; Thousands March In London

World Alarmed By Violence In US; Thousands March In London

Associated Press World Alarmed By Violence In US; Thousands March In London 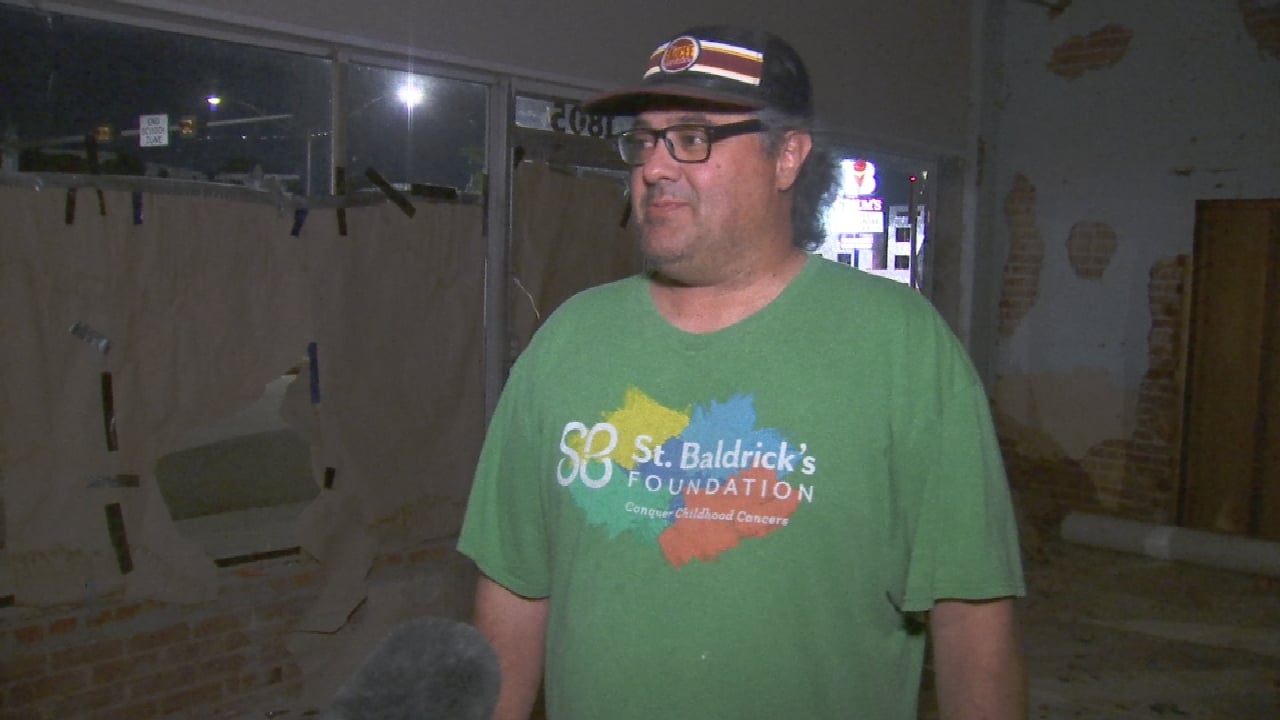 Businesses Pick Up the Pieces from Saturday's Protest

Businesses Pick Up the Pieces from Saturday's Protest

Tulsa Police Investigating After One Person Shot During Armed Robbery

CBS News In a historic first for the U.S. space program, a spacecraft designed, built, owned and operated by a private company — SpaceX — blasted off Saturday with two NASA astronauts aboard — the first purely private sector launch to orbit in space history. It was also the first launch of a crew from U.S. soil since the space shuttle program ended nearly nine years ago.