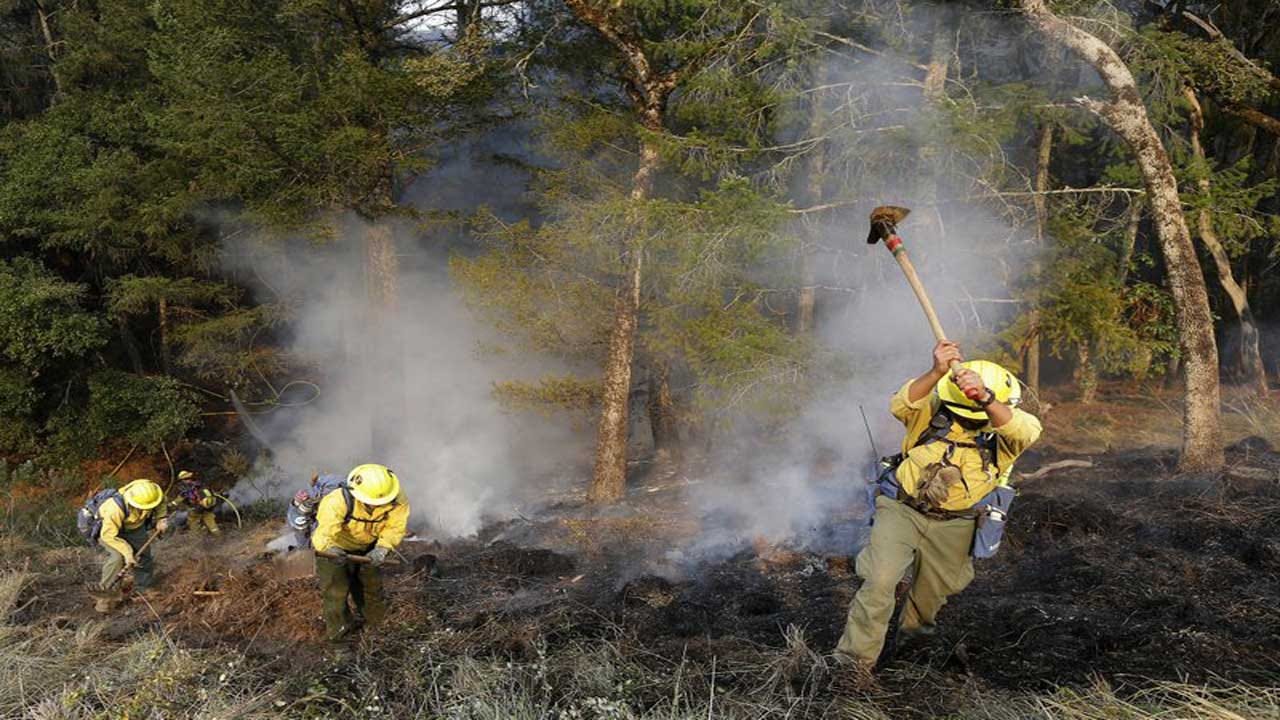 Hundreds of thousands of people in California could be without power for days in the largest public-safety outage in the state's history. Pacific Gas & Electric started shutting off power overnight Tuesday in more than half of California's 58 counties because of what the company called an unprecedented wildfire danger.

More than 200,000 additional customers could lose power around noon. The utility was considering another outage for over 40,000 different customers.

The utility announced that it was shutting off power to customers in 34 northern, central and coastal California counties to reduce the chance of fierce winds knocking down or toppling trees into power lines during a siege of hot, dry, gusty weather. Gusts of 35 to 45 mph were forecast to sweep a vast swath of the state, from the San Francisco Bay Area to the agricultural Central Valley and especially in the Sierra Nevada foothills, where a November wildfire blamed on PG&E transmission lines killed 85 people and virtually incinerated the town of Paradise.

The California Department of Forestry and Fire Prevention said it increased staffing in preparation for extreme fire weather. The winds will be the strongest and most widespread the region has seen in two years, and given the scope of the danger, there was no other choice but to stage the largest preventive blackout in state history, PG&E said.

"This is a last resort," said Sumeet Singh, head of the utility's Community Wildfire Safety Program. However, people should be outraged by the move, Governor Gavin Newsom said.

"No one is satisfied with this, no one is happy with this," Newsom said. The utility needs to upgrade and fix its equipment so massive outages aren't the norm going forward, he said.

It could take as many as five days to restore power after the danger has passed because every inch of power line must be checked to make sure it isn't damaged or in danger of sparking a blaze, PG&E said.

The news came as residents in the region's wine country north of San Francisco marked the two-year anniversary of deadly wildfires that killed 44 and destroyed thousands of homes. San Francisco is the only county in the nine-county Bay Area where power will not be affected.

To the south, Southern California Edison said more than 106,000 of its customers in parts of eight counties could face power cuts as early as Thursday as Santa Ana winds loomed. The cutbacks followed a game plan instituted after deadly wildfires — some blamed on downed PG&E transmission lines — destroyed dozens of lives and thousands of homes in recent years and forced the utility into bankruptcy over an estimated $30 billion in potential damages from lawsuits.

The outages weren't limited to fire-prone areas because the utilities must turn off entire distribution and transmission lines to much wider areas to minimize the risk of wildfires.

Classes were canceled for thousands of schoolchildren and at the University of California, Berkeley, Sonoma State University and Mills College. The California Department of Transportation said it was installing generators to avoid closing the Caldecott Tunnel linking the East Bay to San Francisco and the Tom Lantos Tunnel on State Route 1 in Pacifica.

"The tunnels can't operate without power," Caltrans tweeted. PG&E had warned of the possibility of a widespread shut-off Monday, prompting residents to flock to stores for supplies as they prepared for dying cellphone batteries, automatic garage doors that won't work and lukewarm refrigerators.

"We sold out of lanterns this morning. The shelf is completely empty," said Howard Gibbs, the manager at Ace Hardware in the town of Lafayette, 20 miles east of San Francisco. "We've got just a few flashlights left, and we're down to our last couple propane tanks, too."

Residents of the Sonoma County city of Cloverdale, population 9,300, were preparing for the possibility of zero power and downed internet and cellphone lines, which happened during the wine country fires. Cloverdale homes were not burned then, but residents were worried sick over family in burn zones and in the dark without communications, Mayor Melanie Bagby said.

She accused PG&E of failing to upgrade its equipment. "It's inexcusable that we're in the situation that we're in," she said. "We pay our bills, and we gave PG&E a monopoly to guarantee we would have" reliable power.

But Santa Rosa Mayor Tom Schwedhelm said he was grateful PG&E was taking proactive action. His city lost 5% of its housing in the 2017 Tubbs Fire, which killed 22 and torched nearly 6,000 structures in Sonoma and Napa counties.

State investigators determined the fire was sparked by a private electrical system, and was not the fault of PG&E. "I'd much rather do this than address what we had to address two years ago," Schwedhelm said.

Hospitals would operate on backup power, but other systems could see their generators fail after a few days. Outages even posed a threat that fire hydrants wouldn't work at a time of extreme fire danger.

The East Bay Municipal Utility District serving Alameda and Contra Costa counties recently spent $409,000 to rent 29 backup generators for use beginning at noon Wednesday. "The backup generators that we have are stationed at the pumping plants, which pump water to the fire hydrants," spokeswoman Andrea Pook told the San Francisco Chronicle. "The local tanks have been filled as much as we can, and we have made sure the generators are ready to go."

Counties activated their emergency centers and authorities urged people to have supplies of water for several days, to keep sensitive medicines such as insulin in cool places, to drive carefully because traffic lights could be out, to have a full gas tank for emergencies and to check the food in freezers and refrigerators for spoilage after power is restored. PG&E set up about 30 community centers offering air conditioning, restrooms, bottled water and electronic charging stations during daylight hours.

Oakland Mayor Libby Schaaf asked residents Tuesday not to clog 911 lines with non-emergencies and urged people to be prepared. The city canceled all police officers' days off in preparation for the outages.

"We all know the devastation that fires can cause," she said. In 1991, a grass fire torched the Oakland Hills, killing 25 people and destroying more than 3,000 homes.

PG&E said it was informing customers by text and email about where and when the power would be cut. But its website, where it directed people to check whether their addresses would be affected, was not working most of the day Tuesday after being overloaded with visitors.

At the Dollar General store in Paradise, people were buying candles, gas cans, ice, flashlights, batteries and canned food, and the store ran out of ice chests Tuesday morning, manager Ben Humphries said. Humphries, who moved to Oroville with his family after losing his home in Paradise, said there was a sense of irony to PG&E's aggressive action in the area now, after the company opted not to turn off the power ahead of the November 8 fire that wiped out Paradise.

"I understand their concerns. But in my opinion, it's too little too late. We already had our town burned to the ground," Humphries said.