Three booming cheers of “Banzai!” rang out Tuesday at the Imperial Palace in Tokyo as Naruhito formally declared his ascension to the Chrysanthemum Throne as the nation’s 126th emperor.

As a driving autumn rain briefly gave way to sunshine and 2,000 guests looked on, Naruhito pledged at an elaborate, ritual-laden ceremony to serve as a symbol of the state for his people. Prime Minister Shinzo Abe congratulated him and led the cheers of “Banzai,” which traditionally means “10,000 years.”

The enthronement ceremony is the high point of several succession rituals that began in May when Naruhito inherited the throne after the abdication of Akihito, his father. Naruhito leads the world’s oldest hereditary monarchy, which historians say goes back 1,500 years.

The short ceremony, which some critics say was largely meant to allow Abe’s ultra-conservative government to win public support, was marked by extraordinary contrasts — from the rhythmic shuffle of dozens of court dignitaries’ long, stiff, antiquated robes as they brushed over mats leading to the throne room, to the thunder of cannon salutes reverberating through the palace.

“I hereby proclaim my enthronement to those at home and abroad,” Naruhito said. “I hereby swear that I will act according to the constitution and fulfill my responsibility as the symbol of the state and of the unity of the people of Japan, while always praying for the happiness of the people and the peace of the world as I stand with the people.”

The ceremony began with the sound of a bell. Naruhito, wearing a formal brownish-orange robe that was dyed in sappanwood and Japanese wax tree bark and a black headdress decorated with an upright tail, then stood perfectly still while a pair of black-robed chamberlains pulled aside and secured the purple curtains surrounding the throne.

The throne, called “Takamikura,” is a 6.5-meter- (21-foot-) high decorative structure resembling a gazebo. It was taken apart in 3,000 pieces and transported last year from the former Imperial Palace in Japan’s ancient capital of Kyoto, where emperors lived until 150 years ago, and reassembled and repaired with new lacquer coatings.

Outside the palace, hundreds of well-wishers gathered to celebrate the enthronement, waving flags and shouting “Banzai!” almost in sync with the ceremony that they monitored on their smartphones.

Despite the time, effort and cost put into preparations, the ceremony lasted only about 30 minutes.

It was originally modeled after one by the ancient Tang dynasty of China and is the second of three ceremonies that follow the May succession. Next month sees the highly religious and divisive ritual of Daijosai, or the Great Thanksgiving.

While the harvest ritual is an annual event that the emperor performs privately, the government funds the first one by a new emperor as part of the succession ceremonies. A one-off shrine for the Nov. 14-15 ritual is being constructed at the palace.

Some experts have raised questions over the government’s funding of 16 billion yen ($150 million) for ceremonies that contain religious rites like Daijosai. Most of the cost goes to a one-time shrine that will be demolished after the event.

Criticism, however, was largely eclipsed by the festive mood, in part because Naruhito’s succession came about because of abdication, not death, palace watchers said.

To mark the occasion, Abe’s ultra-conservative government granted pardons to about 550,000 eligible applicants. The decision was not publicly debated.

The pre-war custom of clemency by the emperor, who was revered as a god in those days, has triggered criticism as being undemocratic and politically motivated. At the time of former Emperor Akihito’s enthronement, 2.5 million people were given amnesty.

Earlier Tuesday, the 59-year-old Naruhito put on a white robe and prayed at Kashikodokoro and two other shrines, to report to gods ahead of the ceremony. Enshrined at Kashikodokoro is the sun goddess Amaterasu, the mythological ancestress of Japan’s emperors.

Recent changes to the enthronement ceremony included a slightly smaller structure for the empress — called “Michodai,” or “The August Seat of the Empress” — where Naruhito’s wife, Masako, stood, dressed in traditional costume. It was first used by Naruhito’s grandmother.

Naruhito and Masako, a Harvard-educated former diplomat, hosted a court banquet Tuesday evening for about 400 guests, including foreign dignitaries and heads of Japan’s administrative, legislative and judicial branches and their spouses.

A parade originally planned for Tuesday afternoon had been postponed until Nov. 10 because of a recent typhoon that caused flooding and other damage in central and northern Japan.

Naruhito and Masako have been warmly welcomed by the Japanese public. They made positive impressions by freely conversing with President Donald Trump and first lady Melania Trump during their visit weeks after Naruhito’s succession in May, palace watchers say.

“I think people have high expectations for the emperor, who is fluent in foreign languages and internationalized,” said historian and monarchy expert Eiichi Miyashiro, who is also a journalist.

Naruhito, who studied at Oxford, is a historian, a viola player and an expert on water transport. Masako has struggled for more than a decade since developing “adjustment disorder” after giving birth to the couple’s only child, Princess Aiko, and facing pressure to produce a boy in Japan’s monarchy, which allows only male heirs.

A shortage of males in the royal family has raised succession concerns and prompted calls for a debate, possibly to allow female emperors. Naruhito has an 83-year-old uncle and two potential heirs — his younger brother Crown Prince Akishino and a 13-year-old nephew.

Abe and his ultra-conservative supporters insist on male-only succession, while a majority of the general public supports allowing female emperors. 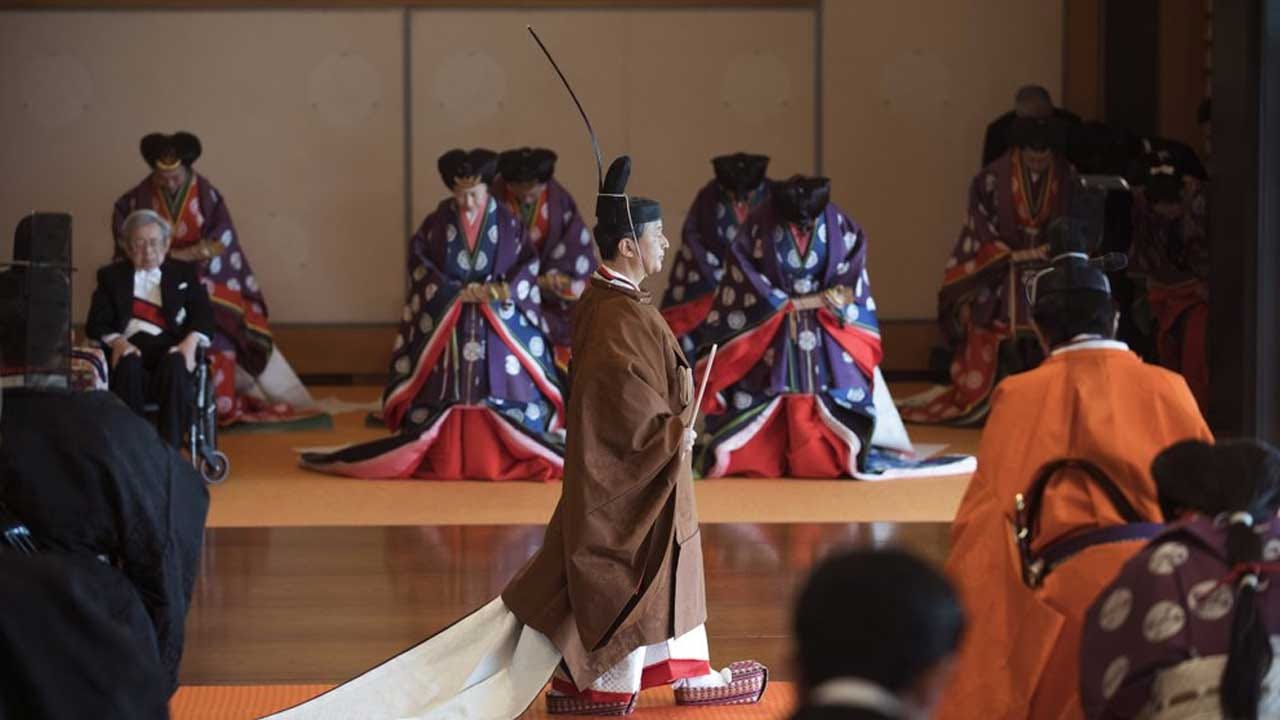