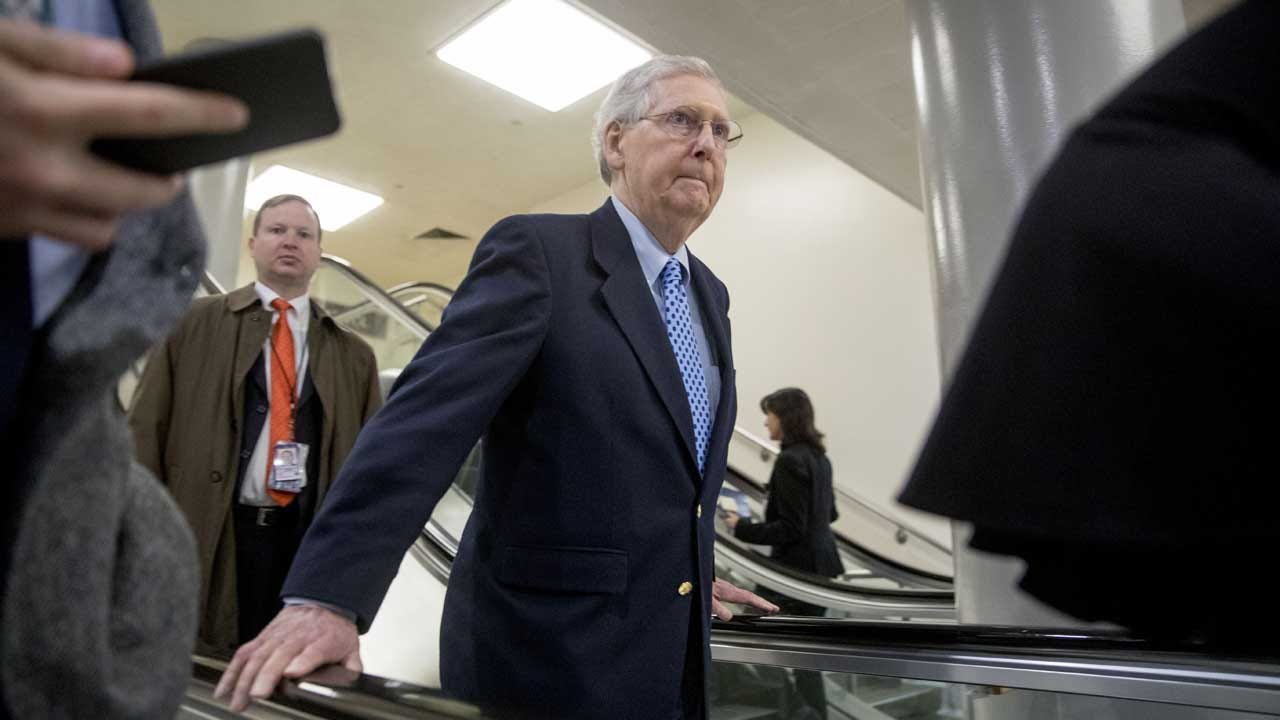 Senate Majority Leader Mitch McConnell is rejecting the Democrats’ push for fresh impeachment testimony against President Donald Trump and making a last-ditch plea for them to “turn back from the cliff” of Wednesday’s expected vote to send the case to the Senate for trial.

McConnell’s remarks Tuesday effectively slapped the door shut on negotiations for a deal proposed by the Democratic leader, Sen. Chuck Schumer, who wants to call top White House officials for the Senate trial, which is set to start next year if the House impeaches Trump this week.

“If House Democrats’ case is this deficient, this thin, the answer is not for the judge and jury to cure it here in the Senate,” McConnell said. “The answer is that the House should not impeach on this basis in the first place.″

Schumer’s proposal was the first overture in what were expected to be negotiations between the two leaders over the contours of a weeks-long trial. Trump wants a more showy proceeding to not only acquit but vindicate him of the impeachment charges from the House, though he has instructed officials not to appear in the House.

McConnell and most GOP senators prefer a swift trial to move on from impeachment. Many centrist House Democrats have begun to signal that they, too, are ready to vote and move on. Senate Democrats want to hear from John Bolton, Mick Mulvaney and others as the proceedings push to the chamber for the trial.

“Why is the leader, why is the president so afraid to have these witnesses come testify?” asked Schumer from the Senate floor. “They certainly ought to be heard.”

House Democrats are to vote Wednesday to impeach Trump, formally accusing him of abusing his power as president in dealing with Ukraine to help himself politically and then obstructing Congress by blocking the later investigation.

What Democrats once hoped would be a bipartisan act — only the third time in U.S. history the House will be voting to impeach a president — was on track toward a starkly partisan roll call Wednesday. No Republicans were breaking with the president, and almost all Democrats were expected to approve the charges against him.

The House Rules Committee was meeting Tuesday in what was expected to be a marathon session to set the parameters for Wednesday’s debate.

“It’s unfortunate that we have to be here today, but the president’s actions make it necessary,” said Chairman Jim McGovern, D-Mass., as he gaveled the session open. “The evidence is as clear as it is overwhelming.

Trump faces two articles of impeachment brought by Democrats. They say he abused the power of his office by pressuring Ukraine to investigate Democratic rival Joe Biden ahead of the 2020 election and obstructed Congress by aggressively trying to block the House investigation from its oversight duties as part of the nation’s system of checks and balances.

The president “betrayed the Nation by abusing his high office to enlist a foreign power in corrupting democratic elections,” says the 650-page report from the House Judiciary Committee. He withheld military aid from the ally as leverage, the report says, and ”Trump, by such conduct, has demonstrated that he will remain a threat to national security and the Constitution if allowed to remain in office.”

The report says the president then engaged in an unprecedented attempt to block the investigation and “cover up” his misconduct. The report also includes Republican rebuttals.

A raucous town hall Monday in the Detroit suburbs put on display the nation’s wrenching debate over the unconventional president and the prospect of removing him from office. Freshman Democratic Rep. Elissa Slotkin was both heckled and celebrated as she announced her support for impeachmént, one of a cascade of centrists from areas where Trump is popular now saying they will vote to impeach.

“There’s certainly a lot of controversy about this,” Slotkin acknowledged to the crowd of 400. “But there just has to be a moment where you use the letter of the law for what it’s intended.”

Trump, tweeting from the sidelines after instructing the White House not to participate in the House inquiry, insisted anew he had done nothing wrong. He has promoted lawyer Rudy Giuliani’s investigation of Biden and a widely debunked theory that it was actually Ukraine not Russia that interfered in the 2016 election, a conspiracy-laden idea that other most other Republicans have actively avoided. “He knows what he’s doing,” Trump said of Giuliani at the White House.

Americans are not fooled, Trump tweeted on Tuesday, by the “Scams and Witch Hunts, as phone as they are.

As the House prepared for Wednesday’s vote, many Democrats announced they would be voting for impeachment. A handful or even fewer are expected to break ranks as Speaker Nancy Pelosi marches her majority toward a vote she hoped to avoid having Democrats take on their own.

One freshman Democrat, Rep. Jeff Van Drew of New Jersey, saw several staff members resign Monday after he said he would vote against impeachment and indicated he was switching parties to become a Republican. Another Democrat, Rep. Collin Peterson, a Minnesota centrist, had not decided how he will vote, his spokeswoman said

As the House was detailing its case against the nation’s 45th president, attention was turning to the Senate where the top Democrat, Schumer of New York, called anew for fresh evidence and testimony from key White House officials for the Senate impeachment trial.

In a letter to McConnell, Schumer proposed hearing testimony from former national security adviser Bolton, acting White House chief of staff Mulvaney and two others as part of a detailed offer he made to Republicans as an opening offer for negotiations.

Several Senate Republicans rejected that idea late Monday, saying the House should have gone to court to force those witnesses to testify over the White House’s objections if Democrats wanted to hear from them.

Bolton, who left the White House in September, once labeled the alternative foreign policy orchestrated by Trump lawyer Giuliani a “drug deal’’ he wanted no part of. Mulvaney has acknowledged the military aid to Ukraine was being held up. The aid was later released as Congress raised questions about the holdup.

McConnell is facing criticism for saying he’s taking his “cues” from the White House for the expected trial. Republicans say Schumer acted much the same two decades ago when the Senate prepared to vote on convicted President Bill Clinton.

Erick Payne An NFL star from Tulsa is once again making a difference in his hometown.
View More Stories

Park Project Pushed Back As Coweta Community Hopes For Change

Kristen Weaver Neighbors in Coweta are getting together in the hope of getting a park some desperately needed improvements.

News On 6 The Tulsa Public Schools Board of Education voted Tuesday night to extend the contract for Superintendent Dr. Deborah Gist until 2024.
View More Stories