Sunny And 72 For Thunder Team Worth Savoring 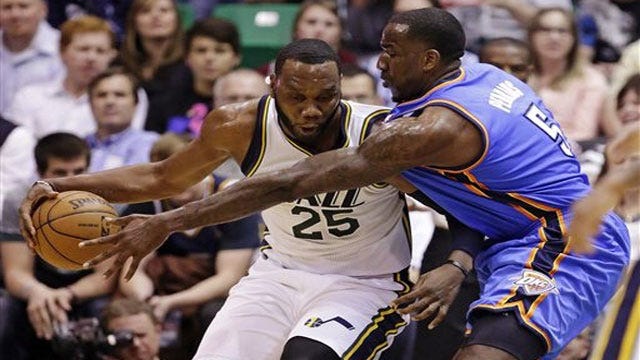 The recent turnaround with the Thunder and its chief rivals is a bit of good fortune and good play. OKC deserves all it is getting as it always seems to bounce back after bad losses or inevitable controversy.

But also, who could have guessed that injuries down the stretch have weakened the two primary challengers -- San Antonio and Denver? So in a season where it appeared the Spurs were the best in the West and the Thunder was very good but not as great as with James Harden a year ago, they all of a sudden look up to see nothing to 72 and sunny.

A win tonight against lowly Sacramento gives them their first regular season Western Conference Championship and the all-important home court advantage through the playoffs.

Dear OKC, who would have ever been insane enough to dream 15 years ago your city would have witnessed something that remarkable? Two relatively easy home wins would leave your Thunder with FORTY more wins than losses! 61-21.

When fantasies became reality and New Orleans temporarily moved here you would've been drug tested to say in public that OKC would soon have its own team that would soon register FORTY more wins than losses. Enjoy these moments. They won't last forever. KD may flee in a few years. Same with Russ. Money may dry up. Bad luck may hit. Who knows, but consistent 60-win seasons in a city like OKC is next to impossible.

Yet that's what we are in the midst of with the leadership of GM Sam Presti, the money and moves of ownership and the deft guidance of Scott Brooks and his staff. Oh yea, the players. These guys are not your normal professional athletes.

While not as accessible as some of us would like, virtually everything else they are involved in is golden. Rare off the court incidents. Community involvement aplenty. Remarkable and consistent work ethic. And two of the most gifted players/athletes the sport has seen complemented by a more than capable and team-first supporting cast.

All of a sudden your OKC Thunder is the odds on favorite to return to the NBA Finals. A composite of the odds I found have the West a two-team race with OKC a 1.5 to 1 favorite and the Spurs a 2 to 1 second favorite with Denver and the Clippers an unlikely 8 to 1.

As we have seen things can change quickly in this league with an injury or two or a bad break or three. But for now, the timing couldn't be better. The Thunder is rising as its pursuers are have hit roadblocks.

Some say it's better to be lucky than good. But right now the Thunder are both -- lucky and good. A lethal combination that has them on the brink of something special.

Sunny And 72 For Thunder Team Worth Savoring

Dean’s Blog: What Must OU Do To Upset Mighty 'Bama?