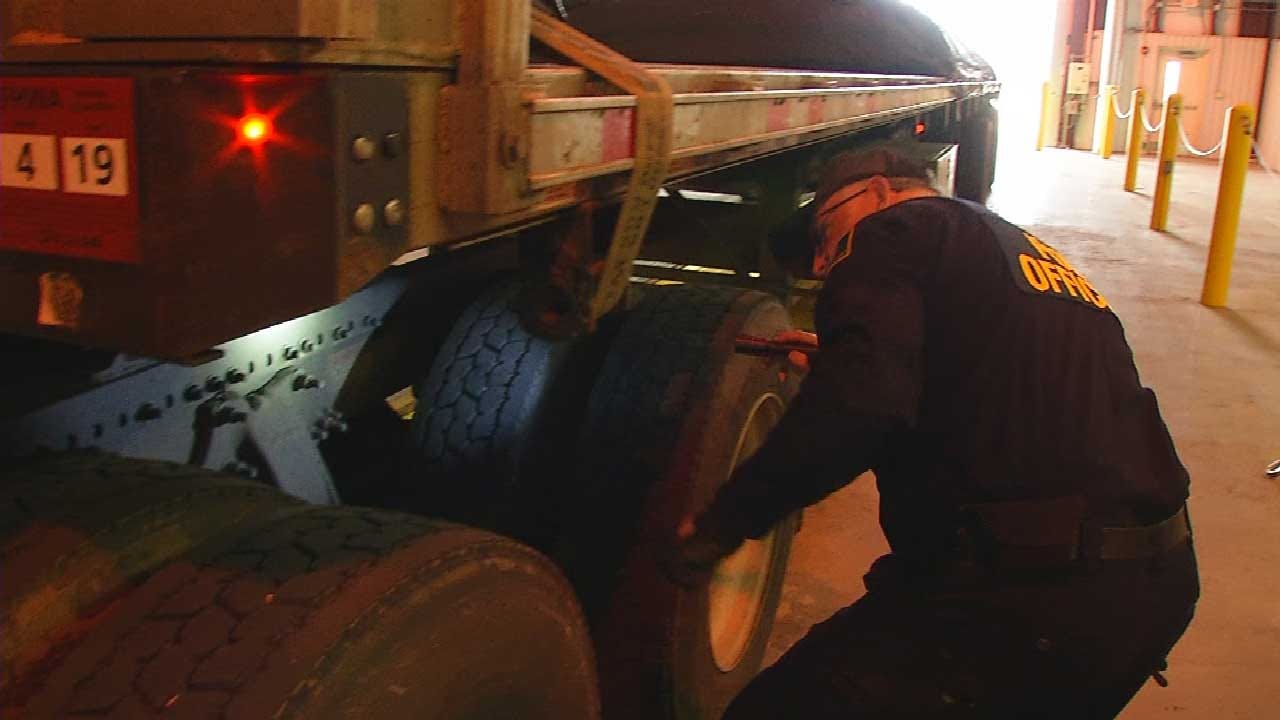 Every day in Oklahoma, there are a dozen or more accidents involving large trucks. At least a couple of them, according to data from the Oklahoma Highway Safety Office (OHSO), leave someone injured, and over the course of a year, more than a hundred leave someone dead.

A high-tech truck inspection program the state launched a decade ago is addressing the problem, but not to the extent originally expected. State transportation leaders are now looking to refine and reinvigorate the program, and reduce the risk to motorists posed by commercial motor vehicles.

Sometimes the risk is to the drivers of the trucks themselves.

"Those I-beams shifted and came right through the cab of that semi," reported helicopter pilot Jim Gardner in April, as he hovered over the scene of what at first looked like a fatal accident.

Gardner explained to viewers that, based on what he was seeing, the driver had had to slam on his brakes, causing his load shift dangerously forward.

"To this day," Gardner said in a recent interview, "I don't know how the guy survived."

As a crossroads state, Oklahoma is in the top 20 states for total highway miles and, accordingly, has a high volume of truck traffic. Tens of thousands of trucks pound the roads each day, with many of the trucks weighing 40 tons or more.

Many trucks are forced to stop, however, at ports of entry (POE) like the one on I-35, just south of the Kansas line. The ports are run jointly by the Oklahoma Corporation Commission and the Department of Public Safety -- specifically, OHP's Troop S.

"The purpose and mission of Troop S is safety," said Lt. Kirby Logan, who oversees OHP operations at all POE's.

Lt. Kirby said their focus is on unsafe trucks: "The potential for injury and fatality is much more."

The Oklahoma Trucking Association share's law enforcement's focus on safety and the use of truck inspections to make the roads safer. "The technologies and inspections in use at Oklahoma's ports of entry," said the OTA's Jim Newport, "help to protect all of the motoring public -- both trucks and passenger vehicles."

Far too many trucks are on the road to be able to inspect each one, but it is possible to scan each one, and that's what happens at each port, when it's open.

"They run seven days a week, 365 days a year," said Lt. Logan. Originally, the ports were to be in operation 24 hours a day, but funding and staffing issues made that impossible and lawmakers changed it to 18-20 hours a day.

"They run two shifts, two long shifts," Logan followed, "and so they'll either open up at five or six in the morning and they don't close until anywhere from 11 o'clock at night to one o'clock in the morning."

Sensors positioned over the highway -- well ahead of the POE -- alert OCC and DPS personnel to potential violations by scanning for height, weight, registration, even tire anomalies.

"So we've got a lot of screening processes that help narrow it down," Lt. Logan said.

Based on DPS data from 2018, approximately 1 in every 700 trucks passing a port of entry is pulled for inspection, less than two-tenths of one percent. Given the extensive screening each of those trucks has been subjected to, it's not surprising that a much, much greater percentage of the trucks that are inspected are found to have safety issues.

Last year, DPS conducted 7,583 truck inspections at the state's four Ports of Entry. 2,746 of those inspections resulted in the truck being taken out of service, at least temporarily. That's 36 percent, or more than one in three inspected trucks deemed unfit for the road, either because the truck had a safety issue or the driver was out of compliance.

"From Troop S's perspective, it's definitely a concern about the unsafe commercial vehicles driving up and down the road," Lt. Logan acknowledged.

Meanwhile, the Corporation Commission is also checking on factors that can have a direct bearing on highway safety: a truck's gross weight, the security of the load it's carrying, and the driver's qualifications. In 2018, between the ports of entry and about ten weigh stations across still in operation, OCC caught almost 51,000 such violations.

But how many more violations could the state be catching?

At a news conference in January 2008, state leaders announced a "visionary move," spearheaded by the Corporation Commission, to overhaul and upgrade the state's system for weighing and inspecting commercial trucks. Plans called for the construction of nine ports of entry, all of which would be operational within six years.

ODOT officials said it was a learning process, and that the actual cost of building and operating each facility ($10-12 million) ended up being twice the cost originally expected ($6 million). Furthermore, they say, when the state's economy went south, state lawmakers diverted significant funds that had been earmarked for the project to help balance the budget.

"We understand that the Legislature had to do that," said ODOT spokeswoman Terri Angier in a recent interview, "but it was $50 million taken out of this revolving fund that would go directly to building these ports."

Politics has also gotten in the way. Advocates, respectively, for DPS and OCC have introduced bills in recent sessions aimed at consolidating control of the port inspections -- and the fines that result -- in one agency. The bills haven’t passed, but have helped create uncertainty about the future of POE operations.

Angier said ODOT has just as much of an interest in port (and other inspection) operations and therefore is grateful that all three agencies are now at the table figuring out how best to move forward.

"We really didn't know how these [ports] were going to operate," Angier admitted, "now we have ten years of lessons learned."

ODOT also has $12 million dollars in the bank, officials said, which is enough to get started on construction of the next scheduled port of entry, on highway 75 in Bryan County, perhaps before the end of the year.

"The OTA applauds the Oklahoma Department of Transportation and Department of Public Safety for investing in safety for all Oklahomans," said OTA's Newport.

According to the trucking industry, the trucking sector invests an average of $9.5 billion on safety per year.