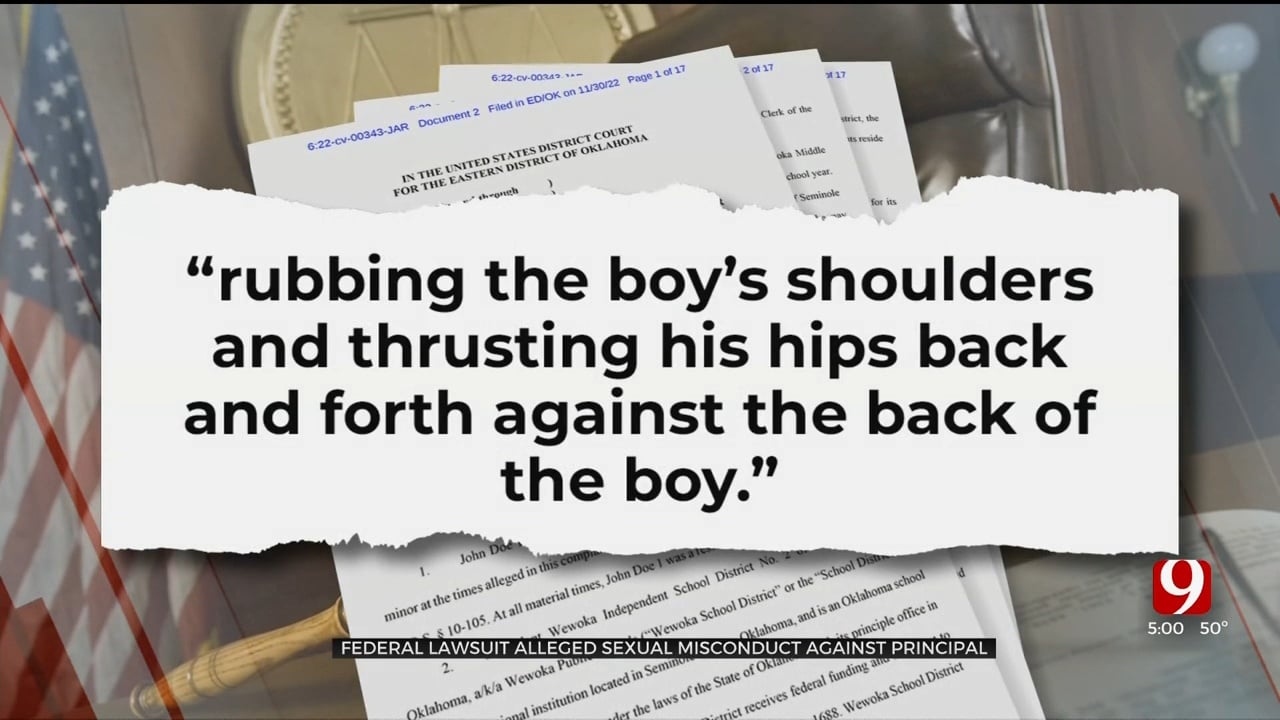 A federal lawsuit has been filed against former Wewoka Middle School Principal Cody Barlow and Wewoka Public Schools. The complaint details how Barlow allegedly sexually assaulted a male student on campus, during school hours, and claims the Wewoka School District knew of Barlow’s misconduct long before he was escorted from the school and placed on administrative leave.

The lawsuit states: "While on school grounds and during school hours, a sexual predator repeatedly preyed on students even after Wewoka School District was notified of the sexual predator’s misconduct." It goes on to say, "Barlow molested and committed lewd acts, including but not limited to inappropriately touching or feeling the body or private parts of male students while at Wewoka School District, on campus, and during school hours."

Cody Barlow served many roles in Wewoka, including the middle school principal, boys' golf coach, athletic director, and youth group leader at the local Baptist church. Attorneys involved in the case say this John Doe is likely not the only victim.

The complaint cites that Barlow gave a sixth-grade boy at the school special treatment, "exhibiting what is commonly referred to as 'grooming behavior.'"

It goes on to state, "For example, Barlow identified Plaintiff for a 'gifted' student program; Plaintiff was the only student nominated for such program. Barlow also initiated and escalated improper physical contact with Plaintiff. Barlow would also initiate such inappropriate contact in front of other Wewoka faculty and parents."

We spoke with Cameron Spradling who is representing the young boy, John Doe. "I would say that his grooming behavior started with fifth- and sixth-grade boys," said Spradling.

"In the number of years and decades that i’ve been representing sexual assault victims, I would say that representing boys is the most difficult." said Spradling. "It’s the most difficult because young boys do not want to come forward because of the embarrassment that they feel, because they’re concerned of being bullied if they were to come forward, because of the blame they feel within themselves of being victimized in such a way.”

The complaint describes an alleged incident on October 12- where a counselor walked in on Barlow “rubbing the boy’s shoulders and thrusting his hips back and forth against the back of the boy.”

The lawsuit reads: "On the morning of October 12, 2022, Wewoka Middle School counselor, Ashley Azlin, walked into Barlow’s office and witnessed Barlow standing behind a 7th grade boy, rubbing the boy’s shoulders and thrusting his hips back and forth against the back of the boy. Ms. Azlin let out a yelp, but Barlow did not stop. Ms. Azlin then screamed. Barlow then sat down and placed the boy in his lap, over what Ms. Azlin observed to be Barlow’s erect penis."

The lawsuit claims "That same day, October 12, 2022, Wewoka Superintendent, Dr. Shellie Gammill, contacted a select group of Wewoka Middle School parents and requested they come to her office." It goes on to say, "he informed them that Barlow had engaged in inappropriate contact with 'several boys.'"

The complaint stated, "At this time, it became clear that Wewoka School District knew of Barlow’s misconduct long before he was escorted from the school."

According to the lawsuit: Later that day, Superintendent Gammill told the State Department of Education that she placed Barlow on leave and filings say, “She admitted to OSDE that, as of that date, she knew of at least four to five students involved in Barlow’s misconduct."

It goes on to say "Wewoka School District also facilitated Barlow’s access to young boys during non-school activities. For example, in his role as youth pastor at Wewoka’s First Baptist Church, Barlow would take boys to the now infamous Falls Creek church camp. And Wewoka School District, at Barlow’s request, would provide district buses for Barlow to transport them."

Further going on to say "the Wewoka School District permitted Barlow to chaperone school events, including off-campus and overnight activities. On such occasions, Barlow would be responsible for transporting and housing students, which provided him unfettered and unsupervised access to students in captive environments."

Barlow was charged with lewd acts with a minor at the end of October after the Oklahoma State Bureau of Investigation took over the case. Barlow bonded out at $100,000 after being arrested.

Cody Barlow began his first teaching position with Wewoka in 2013. He quickly took on new roles in his time there including boy's golf coach, athletic director, and eventually principal of the middle school.

The lawsuit states: "Defendant Cody Barlow (“Barlow”) has been the Principal of Wewoka Middle School since the 2019-2020 school year and was a teacher there since the 2012-2013 school year."

The lawsuit also states "Barlow also spent inordinate amounts of time with boys alone in his office, despite there being no indication such boys were in trouble or otherwise there for disciplinary reasons." It goes on to say: "Once becoming principal, Barlow also moved his office to a location within Wewoka Middle School that provided him with greater privacy for his activities and isolated him—and his victims—from other Wewoka staff and students."

"We suspect that there's multiple victims going back to his first year of teaching there," said Spradling. "Other boys have come forward as well."

We reached out to Dr. Gammill and Wewoka Public Schools and received no response. We also reached out to the First Baptist Church of Wewoka for a statement or response and did not receive anything.