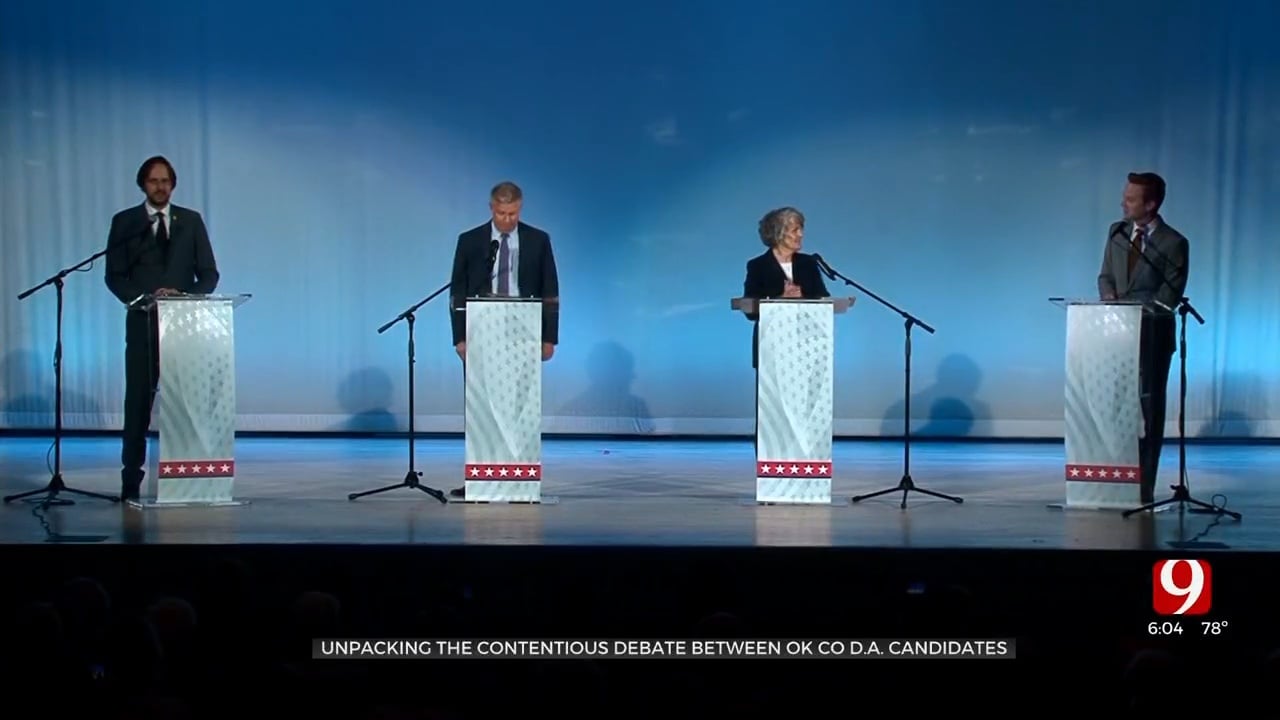 As the 2022 midterm elections draw near, sparks are flying in the race to replace Oklahoma County District Attorney David Prater.

On Tuesday night, Republican Kevin Calvey and Democrat Vicki Behenna faced off on the debate stage.

The two agreed on several fronts including a need for change in the DA’s office and how they planned to prosecute laws on marijuana and abortion.

However, speaking with News 9 on Wednesday, both seemed to agree the differences between the campaigns are vast.

In pushing to be the county’s top prosecutor, each candidate touted why they are the top choice.

“You have to procure the funds to attract and retain talented staff,” said Calvey – who sees the job as an administrative one. “I’m the only candidate who has the relationships necessary to procure those funds.”

He also hopes those relationships would lead to policy changes which he believes are needed.

Behenna on the other hand says a different qualification is necessary.

In those 25 years, Vicki Behenna was involved in the prosecution of Murrah Building Bomber Timothy McVeigh.

While Calvey received a commendation for prosecuting terrorists in Iraq, Behenna doesn’t believe that time was enough.

“At most he has one year of experience in my opinion that's a rookie,” she said.

Calvey rebuts by pointing to the quality of his work.

“The army felt differently,” said Calvey. “You can look at my Bronze Star citation.”

The difference between the two, as Calvey sees it, is in the treatment of law enforcement.

He accuses Behenna of pandering to those in favor of defunding the police. As DA, he believes she would be soft on crime.

In response, Behenna called the accusations “ridiculous” adding that there is no evidence to point to that.

Both candidates have also made it into the headlines during their campaigns.

Before the primaries, the OSBI announced an investigation into Calvey over campaign spending.

It’s an investigation he called “a political hatchet job.” He said at the debate the case was closed.

News 9 confirmed with the OSBI that the investigation is not closed.

When asked about the issue Wednesday, Calvey said, “They had told me they were wrapping up their investigation. If it’s still pending that’s fine, but they did not ask any additional questions, and from what they did ask, it seemed that there was nothing there.”

After the interview Wednesday, Calvey said he spoke to OSBI and was told they still have questions that they forgot to ask.

Meanwhile, at the debate Tuesday Calvey accused Behenna of knowingly presenting false evidence on behalf of a client who was convicted in a fraud scheme.

Either way, with the first debate in the books - and less than a month to the election - both believe the choice is clear.