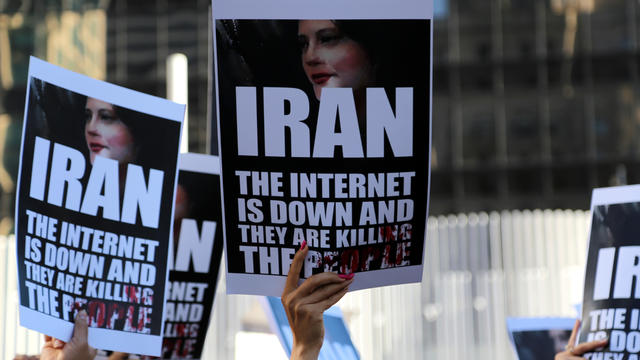 The family of a young woman who died in Iran after she was accused of a dress code violation and arrested by the country's "morality police" have told CBS News she was tortured and killed in police custody. Mahsa Amini's death sparked protests that have raged across Iran for 11 days against the country's ruling Muslim clerics, with more than 75 people killed in the unrest according to one monitoring group.

With defiance and despair, family, friends and neighbors came in their thousands last week to bury 22-year-old Amini.

"She was tortured, according to eyewitnesses," her cousin Erfan Mortezaei told CBS News correspondent Ramy Inocencio. Mortezaei lives in exile in Iraq, but he's in contact with family still in Iran.

"She was tortured in the van after her arrest, then tortured at the police station for half an hour, then hit on her head and she collapsed," he told CBS News.

Iranian authorities say she died of a heart attack, but her father says she was beaten to death by the "morality police," the enforcers of Iran's strict interpretation of Islamic dress code.

Her head covering was reportedly too loose.

An official coroner's report is pending.

Amini's death has become a rallying cry, sparking protests across dozens of cities and towns, including the capital Tehran. Women have taken to the streets, brazenly removing their required head coverings and burning them as others record the protests on cell phones.

Men have joined the angry demonstrations, denouncing a regime they see as repressive, and the cause of crushing international sanctions and isolation that have sent inflation soaring and led to rampant poverty.

Iran's military and its rulers blame the unrest on outside influence, and insist they are ready to deal with their enemies.

The protesters have been met with live ammunition, tear gas and water cannon, and deaths and injuries have mounted fast over the last week. Official media outlets put the death toll at 41 — unchanged in recent days — but the Norway-based Iran Human Rights (IHR) group said Tuesday that at least 76 people had been killed in the crackdown.

Iranian officials have confirmed that more than 1,200 people have been arrested amid the protests, and rights groups say there are activists, lawyers and journalists being swept up along with demonstrators.

The regime has organized pro-government rallies in a public relations push-back, and cut internet access in a bid to prevent people from organizing and sharing videos. But the information and images of the protests continue to make their way out.

More protests against Iran's regime have formed, meanwhile, from Atlanta to Istanbul, Paris and London.

Inocencio asked Mortezai what he would tell the ayatollah if given the chance.

"The old dictator is in his last days," he replied.