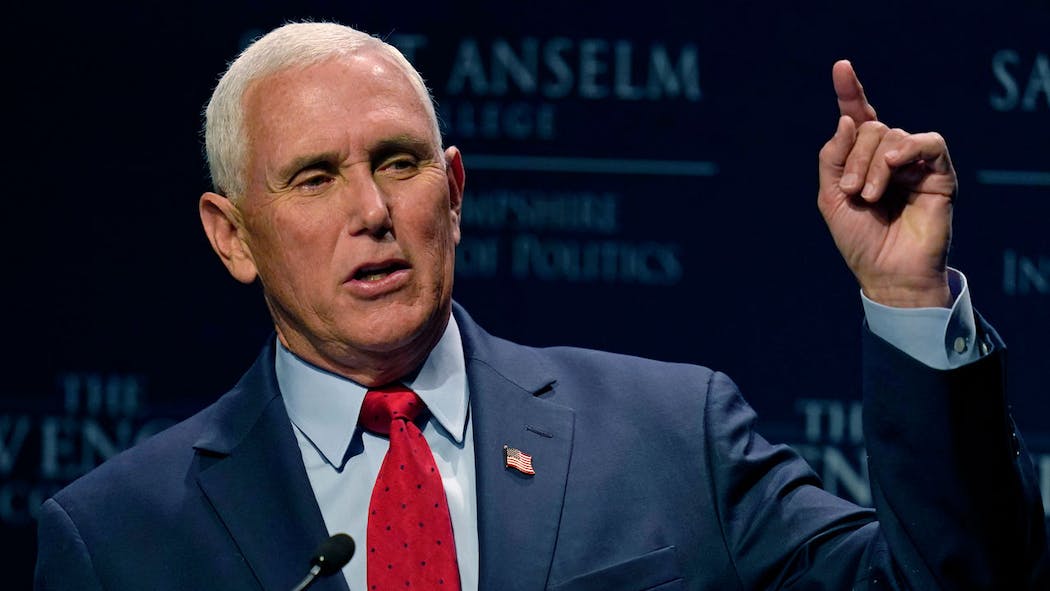 Former Vice President Mike Pence said Wednesday he would "consider" appearing before the House select committee investigating the Jan. 6, 2021, assault on the U.S. Capitol if the panel summoned him to answer questions.

"If there was an invitation to participate, I would consider it," Pence said during the Politics & Eggs event held at St. Anselm College in Manchester, New Hampshire.

But the former vice president noted if he were invited to testify before House investigators, he would have to "reflect on the unique role that I was serving in as vice president."

"It'd be unprecedented in history for a vice president to be summoned to testify on Capitol Hill, but as I said, I don't want to pre-judge," he continued. "If there were ever any formal invitation rendered to us, we'd give it due consideration, but my first obligation is to continue to uphold my oath, continue to uphold the framework of government enshrined in the Constitution."

A select committee spokesman declined to comment on Pence's remarks.

The committee probing the Jan. 6 assault has heard from numerous aides close to Pence, including his former chief of staff Marc Short and chief counsel Greg Jacob, who testified publicly during the panel's third hearing of the summer about the pressure campaign waged on Pence to unilaterally reject Electoral College votes from key states former President Donald Trump lost.

But members of the committee have not asked Pence himself to appear before them. Rep. Adam Kinzinger, a Republican from Illinois who sits on the panel, told "Face the Nation" in May that he would "love" for Pence to voluntarily testify before the committee, and in July said lawmakers were still debating whether to request his testimony.

Pence, meanwhile, said Wednesday that Jan. 6 was a "tragic day in the history of our country" and he was "angered" to see the Capitol "ransacked." He criticized House Speaker Nancy Pelosi for rejecting some of the GOP lawmakers proposed by House Minority Leader Kevin McCarthy to sit on the select committee and called it a "missed opportunity" for the American people.

The panel held a series of eight public hearings throughout the summer mapping out a multi-pronged effort by Trump to thwart the transfer of power after he lost the 2020 presidential election to President Biden.

The committee is expected to issue an initial report of its findings in the fall and hold additional hearings, as its members continue to conduct closed-door interviews.

At the crux of Trump's effort to pressure Pence was a theory pushed by conservative lawyer John Eastman that the vice president could single-handedly toss out electoral votes or send slates of electors back to the state legislatures to be replaced during the Jan. 6 joint session of Congress, which Pence presided over.

But the then-vice president declined to go along with Trump and Eastman's strategy, and he and his top aides repeatedly told the former president and his allies the theory had no basis in the Constitution or federal law, the committee showed during its mid-June hearing.

Pence's rejection of Trump's plan led to what was described as a "pretty heated" call the morning of Jan. 6 between the former president and his vice president. White House aides told committee investigators that Trump called Pence a "wimp" and "the 'p' word."

The former president also sent a tweet the afternoon of Jan. 6 criticizing Pence for not rejecting state electors, which incited anger among the mob of Trump's supporters who descended upon the Capitol.

Some of the rioters chanted "hang Mike Pence," and the then-vice president was ultimately evacuated from the Senate after they breached the Capitol. The committee said Pence came within 40 feet of the mob, though he refused Secret Service directions to get in a car to leave the Capitol. Instead, he was kept in a secure location within the Capitol complex for more than four hours until the building was cleared and the joint session reconvened to affirm Mr. Biden's victory.

During the event in New Hampshire, Pence also spoke about the search conducted last week by the FBI of Trump's South Florida residence, Mar-a-Lago. The search warrant and list of items taken from the property, which was unsealed Friday, show the FBI is investigating Trump for possible violations of three federal statutes. Federal law enforcement took during the search 11 sets of classified documents, including boxes containing records marked "secret," "top secret," "confidential" and "classified/TS/SCI," or top secret/sensitive compartmented information.

Pence said he was "deeply troubled" to learn the search warrant was executed at the personal residence of a former president and reiterated his call to Attorney General Merrick Garland to explain why the search was necessary.

"Never before in American history has the personal residence of a former president been subject to a search warrant, and in the wake of the four years that we endured the politicization of the FBI, the American people have a right to know the basis for this," he said. "This unprecedented action does demand unprecedented transparency."

Pence also delivered a message to Republicans who are attacking the FBI for the search at Mar-a-Lago, as federal authorities warned of an "increase in violent threats" against law enforcement officials and facilities.

"These attacks on the FBI must stop. Calls to defund the FBI are just as wrong as calls to defund the police," the former vice president said. "The truth of the matter is we need to get to the bottom of what happened, we need to let the facts play out, but more than anything else, the American people need to be reassured in the integrity of our justice system and the very appearance of a recurrence of politics playing a role in decisions at the Justice Department demands transparency as never before."