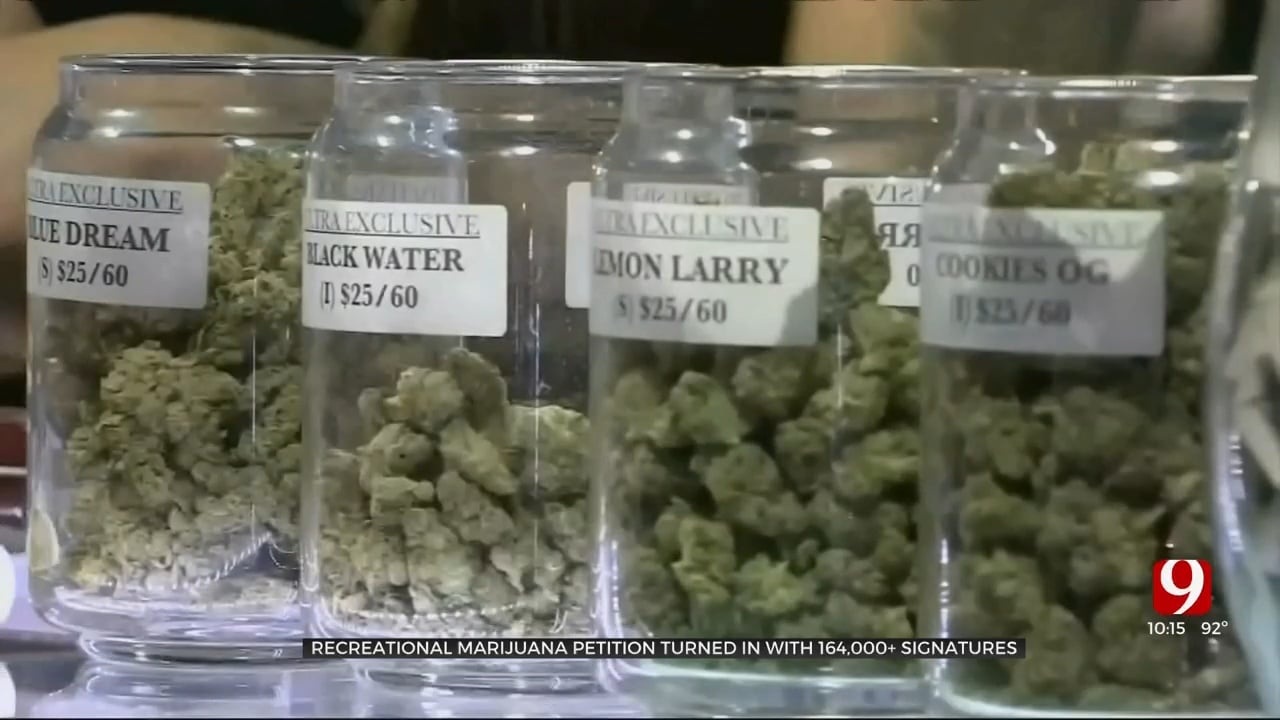 The group petitioning to get recreational marijuana on the ballot is one step close to their goal.

Oklahomans for Sensible Marijuana Laws turned in more than 164,000 signatures to the Secretary of State Tuesday morning.

The Campaign Director told News 9 this is the first time the group has made it this far into the process.

“I’ve personally been working on this since 2019 there is a group of Oklahomans who have been working on it for several years. We have had other petitions that have not made it to this stage, so we are really excited that this petition has been able to get enough signatures,” said Michelle Tilley, a Proponent and Campaign Director For YesOn820.

The group stepped into the Secretary of State’s Office for the first time.

“The requirement to get on the ballot is 94,911 valid signatures, that is people that are registered to vote in Oklahoma. Obviously, we collected way more than that, almost double, so we are pretty excited with the enthusiasm we experienced when we went out to collect signatures,” she said.

With those signatures they are hoping to get State Question 820 on the ballot in November. The measure would legalize, regulate, and tax recreational marijuana for adults 21+ in Oklahoma.

“It’s the right petition, it is the right time, and that voters are ready to vote on it so today was definitely a day of celebration,” she said.

The group has looked into amending the state constitution but ultimately decided to go with a statutory petition which will work alongside the medical program that currently exists in the state.

“We’ve had conversations with the OMMA along the way to let them know and work with them on how this new law would look,” said Tilley.

The OMMA told News 9, “Right now, our focus is on regulating the medical marijuana industry as we are mandated to do. Should that role need to change, we will respond accordingly."

If this becomes law, for the first two years, only Oklahoma Medical Marijuana licensed business holders will have access to a recreational license. After the two years Tilley said recreational marijuana business applicants will have to meet the rules set by OMMA, State Question 829, and the legislator.

The measure would also use tax revenue for schools and healthcare programs.

“Recreational would provide a 15% tax which is going to be higher than what is on the medical program currently. We project that it is going to provide a lot of revenue for our state,” she said.

The Secretary of State will be counting signatures over the next couple of weeks and let them know if they have hit the requirement to make it on the ballot.

“Once you have gathered all your petitions and submitted them to the Secretary of State then your petition period ends. That is why we wanted to collect more than just the minimum amount required,” said Tilley.