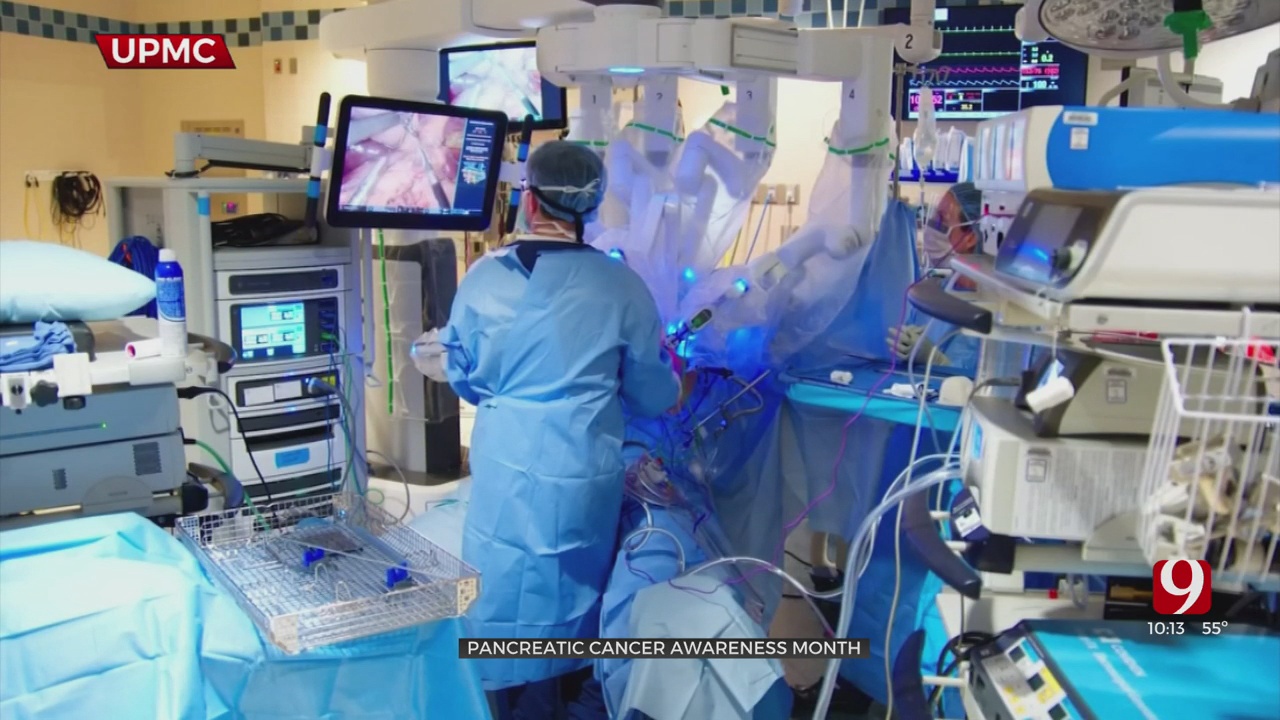 Pancreatic cancer has one of the lowest survival rates at just 7%.

In fact, about 90% of people who get it will die within 5 years of their diagnosis. The American Cancer Society reports 60,000 people will get pancreatic cancer this year, but 48,000 won’t make it to the new year. [[https://www.cancer.org/cancer/pancreatic-cancer/about/key-statistics.html]]

Where is the pancreas?

The pancreas is a 6-inch gland located in the abdomen and surrounded by the stomach, small intestine, liver, spleen, and gallbladder. The pancreas has two functions: create enzymes to break down food and make hormones. Because the pancreas is so well hidden in the abdomen, finding cancer is difficult and often happens too late.

“Typically, when you develop a pancreatic cancer, it’s not going to cause symptoms until it’s pretty far advanced,” said Dr. Ajay Jain with OU Health. Doctor Jain is a professor and chief of the Division of Surgical Oncology in the Department of Surgery at the OU College of Medicine, and the Core Medical Director for the Stephenson Cancer Center.

What are the symptoms?

It's estimated that 670 Oklahomans will be diagnosed with pancreatic cancer this year. Someone who understands what the weight of that diagnosis is Linda Hall of Coweta. [[https://cancerstatisticscenter.cancer.org/#!/state/Oklahoma]]

Linda's husband, Roger Hall, was diagnosed with it in September 2018. “It goes so quickly, or it did with him, so quickly. [The cancer] was everywhere," she said.

After developing blood clots in his leg and significant blood pressure issues, Roger's symptoms didn’t seem too alarming at first. He'd had back pain before, but Linda knew something was off when he asked for medication stronger than Tylenol three nights in a row. “And he said, ‘I’m hurting from my back all the way around.'

Roger went to the doctor. A full body scan showed lesions on his liver, but a biopsy revealed the worst: Stage 4 pancreatic cancer. “They offered him chemo, but he said he didn’t want to take it. They said it would give him some time, and he said, ‘Time to suffer more?'”

Unfortunately, stage 4 is not curable as of this writing. Most people are lucky to make it one year. That’s because the cancer’s already spread to nearby organs like the liver, lungs, and lymph nodes. [[https://www.hopkinsmedicine.org/health/conditions-and-diseases/pancreatic-cancer/pancreatic-cancer-prognosis]]

Stage 4 is also called 'metastitic' or 'advanced cancer.' Most pancreatic cancer patients are diagnosed with stage 4. Patients diagnosed at an earlier stage can also develop stage 4 if the cancer spreads.

Surgery offers the only chance of survival, but that's only if the cancer is caught early enough.

A common, yet tricky procedure is the Whipple. That’s when doctors remove part of the pancreas, small intestine, gallbladder, and bile duct. According to the Mayo Clinic, the remaining organs are reattached to allow a person to digest food normally.

A pancreatic tumor can only be removed the the tumor is in the head of the pancreas and has not spread to other parts of the body. Although 20% of pancreatic cancer patients may be eligible for surgery, data shows that up to half of those patients are told they are ineligible.

The Pancreatic Cancer Action Network (PanCAN) has a list of resources explaining the procedure, how to find the best surgeon, question to ask a surgeon, and what happens before and after the procedure. [[https://www.pancan.org/facing-pancreatic-cancer/treatment/treatment-types/surgery/whipple-procedure-pancreaticoduodenectomy/]]

"The general 5-year survival rate for people with pancreatic cancer is 10%. Survival rates and individual outcomes are based on many factors, including the specific stage of disease when it is diagnosed." -- Cancer.net

Robert Stidham, 41, is a rare long-term survivor of pancreatic cancer. The Oklahoma native was just 31 when he was diagnosed with Stage 1.

Back in the late 2000s, Robert went to the ER numerous times with pancreatitis (inflammation of the pancreas) and no one knew what was causing it. However, during one such visit, a nurse told him she knew someone with a similar issue and gave him the name of a doctor who could help: Dr. John Maple with OU Health.

“He [Dr. Maple] sent me to go have a CT scan, like, a week before. Then I went in for the doctor’s visit," said Robert. “He came back and within minutes was like, 'I know what’s wrong'.

That's when Robert learned he had pancreatic cancer. A 6-centimeter cyst in the duct of his pancreas meant it was an early stage, making him a candidate for the Whipple Procedure.

Within two months he was in the hospital getting that procedure, and now, more than a decade later, he's cancer-free.

However, the Whipple Procedure comes with the threat of major side effects, including: bleeding, infection, difficulty eating or keeping food down, leakage from the pancreas or bile duct connection, and diabetes. The latter of which can be temporary or permanent. [[https://www.mayoclinic.org/tests-procedures/whipple-procedure/about/pac-20385054]]

Robert did end up with diabetes in 2018. He collapsed at a concert and was rushed to a hospital where he was told he'd had a diabetic seizure. “After I had [that], we went to Insulin and that’s been fun, but it’s part of it: I’m alive and happy.”

Having experienced so many medical burdens in his 30s, Robert said he eventually became strong in faith. "I know that after all this stuff happened that it changed my perspective on life. I’m a man of God now. Overall, I appreciate things a lot more now. I look at things different. I try to stress ‘'love everybody.’ That’s my motto."

Robert still goes in for yearly screenings to make sure the cancer stays gone, and so far, the news is good.

Many wonder why screening for pancreatic cancer isn’t more common like it is for breast and colon cancers.

“One of the problems is that screening, unlike a colonoscopy where they put an endoscope and it’s an out-patient procedure, a lot of the screening for pancreatic involves imaging, which can expose you to radiation for a CAT scan, or it can be an MRI scan, which takes a long time in a scanner," said Dr. Ajay Jain with OU Health.

Doctor Jain says because the screening is more difficult, and because pancreatic cancer isn’t as common as lung, breast, or colon cancer, it’s unlikely generalized screening will happen anytime soon. He further explained that unless pancreatic cancer becomes a "Top 3 Cancer" in the USA, regular screenings aren't likely to happen.

However, hundreds of clinical trials are happening right now to figure out the best way to fight pancreatic cancer and eliminate tumors. One of those is immunotherapy: a treatment that uses the body’s immune system to fight cancer.

“I think that may hold a lot of promise in the future," added Dr. Jain.

Before practicing independently in 2007, Dr. Jain was a lab resident at Johns Hopkins University. There, he helped research immunotherapies for pancreatic cancer. He says now, 14 years later, some of those "agents" are in clinical trials. These are novel drugs that are designed to target your immune system to recognize your cancer, but not other organs as something foreign, and induce an immune response," he explained.

The Stephenson Cancer Center at OU Health is also conducting its own research.

Doctor Jain is part of that research and said, “[It's] investigating whether changing the tumor's pH, even through acid blocking agents, may make tumors more vulnerable to killing by chemotherapy."

Researchers are also studying genetic mutations that may be associated with, what Dr. Jain calls, "a worse outcome in pancreatic cancer patients.”

Many cancer patients undergo chemotherapy, but at some point pancreatic tumors will resist it. However, just four months ago, researchers at the Massachusetts Institute of Technology (MIT) discovered a new drug combination that’s showing early potential. They found that three immunotherapy drugs, given together, can eliminate pancreatic tumors in mice. Clinical trials are expected to happen by the end of 2021.

If pancreatic cancer runs in your family, doctors encourage you to get genetic testing.

In 2018, the Journal of the American Medical Association (JAMA) published research suggesting that genetic mutations, known as germline mutations, can be inherited and that it's more prevalent than previously thought.  [[https://jamanetwork.com/journals/jama/fullarticle/2685154]]

​The Pancreatic Cancer Action Network (PanCAN) wrote an article based off that JAMA study just after it came out. Part of that article reads:

"The JAMA study analyzed 21 cancer predisposition genes in more than 3,000 pancreatic cancer patients, gathered from October 2000 to March 2016. The patients’ DNA was compared to previously accumulated genetic data from more than 123,000 healthy individuals.

The research team identified six genes associated with pancreatic cancer risk and found that 5.5% of patients had an alteration in at least one of the genes. Among patients with a known family history of pancreatic cancer, 7.9% had a germline mutation. Surprisingly, 5.2% of patients without any family history were found to have at least one potentially heritable alteration, too."

The full article can be read here. [[https://www.pancan.org/news/new-study-encourages-genetic-testing-for-all-pancreatic-cancer-patients-regardless-of-family-history/]]

While studies are being done to see if there is a correlation between increasing pancreatic cancer diagnoses and processed foods, Doctor Jain tells News On 6 that it's too soon to tell if such a correlation exists.

“Nothing has been clearly identified, but that’s one of the ideas that’s floating around: Could it be something in processed foods or chemicals? I think more studies are needed to determine that, but I think that one thing that does come with processed foods is the obesity epidemic.”