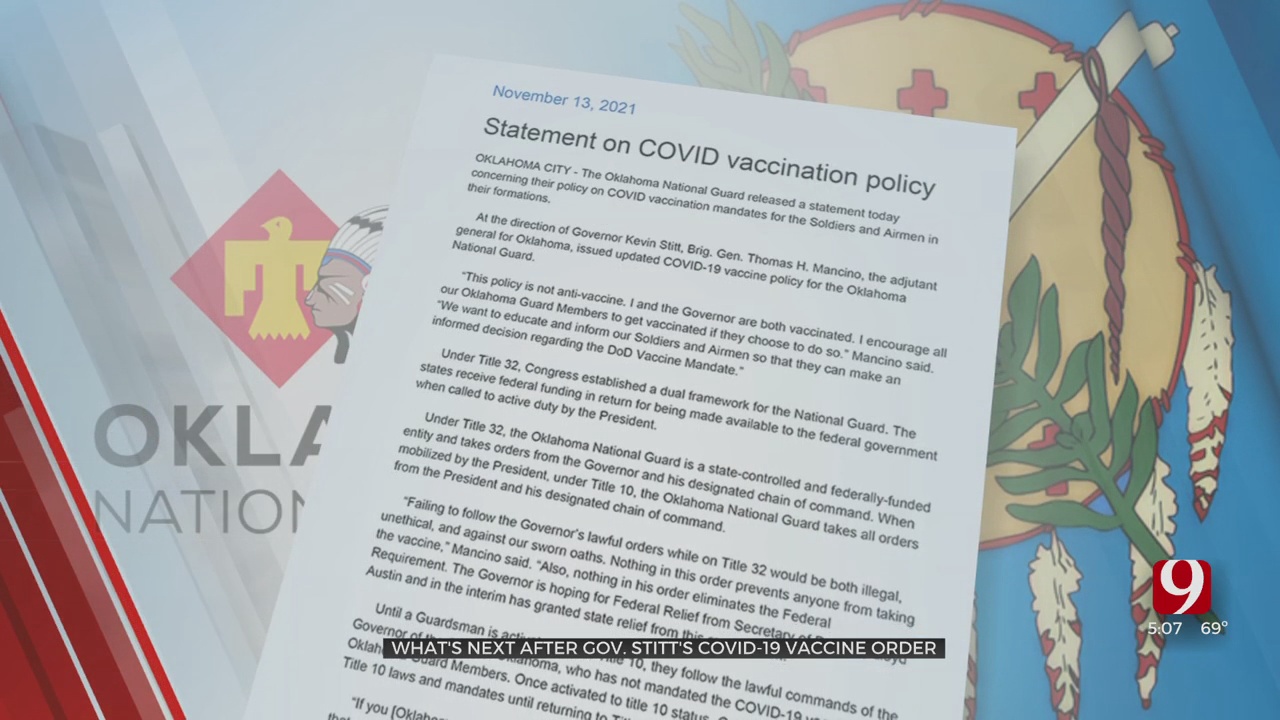 Members of the Oklahoma National Guard are getting two different messages when it comes to the COVID-19 vaccine: One from The Pentagon and another from Governor Kevin Stitt.

The notice explained the legal basis the Oklahoma National Guard feels establishes their authority to issue a policy that does not follow mandates from the U.S. Department of Defense.

Under Gov. Stitt’s Title 32 authority, servicemembers fall under his orders. When the guard becomes ‘federalized’ for a national mission, however, they fall under Title 10 authority where the president is commander-in-chief and would be subject to the DOD vaccine mandate.

In a letter to the Secretary of Defense, Stitt asked for exemption to protect servicemembers’ personal freedoms and to address concerns that they Oklahoma National Guard will lose members if required to vaccinate or face dismissal.

The Pentagon issued a statement, saying they would respond “appropriately” to Gov. Stitt following his request.

“The secretary of defense has the authority to require vaccines for all members of the force. including the national guard, as I said, even in a Title 32 status, because when they're called up, for their monthly training, they're still federally funded, so he has those authorities,” Department of Defense public affairs officer John Kirby said.

“Secretary Austin believes that a vaccinated force is a more ready force,” a statement from The Pentagon said. “That is why he has ordered mandatory vaccines for the total force, and that includes our National Guard, who contribute significantly to national missions at home and abroad."

The governor’s office said it has conducted an internal survey and found that 13% of its 8,200-member force are not planning to get vaccinated for COVID. According to the survey, this accounts for approximately 1,000 members.

The Oklahoma National Guard office released data Monday, showing that about 90% of their 1,500-member full-time force is fully vaccinated.

Out of traditional members that serve one weekend a month and several weeks in the summer, about 40% are fully vaccinated. About 6% have had their first shot.

“This policy is not anti-vaccine,” a statement from The Oklahoma National Guard statement said. “I and the Governor are both vaccinated. I encourage all our Oklahoma Guard Members to get vaccinated if they choose to do so.”

Under the current DOD mandate, Army national guard service members have until June 30, 2022 to get the vaccine or request an exemption.