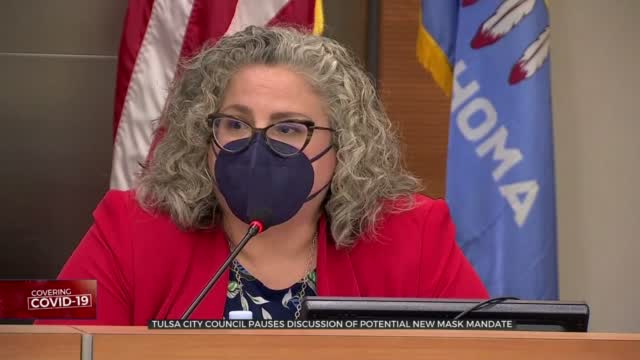 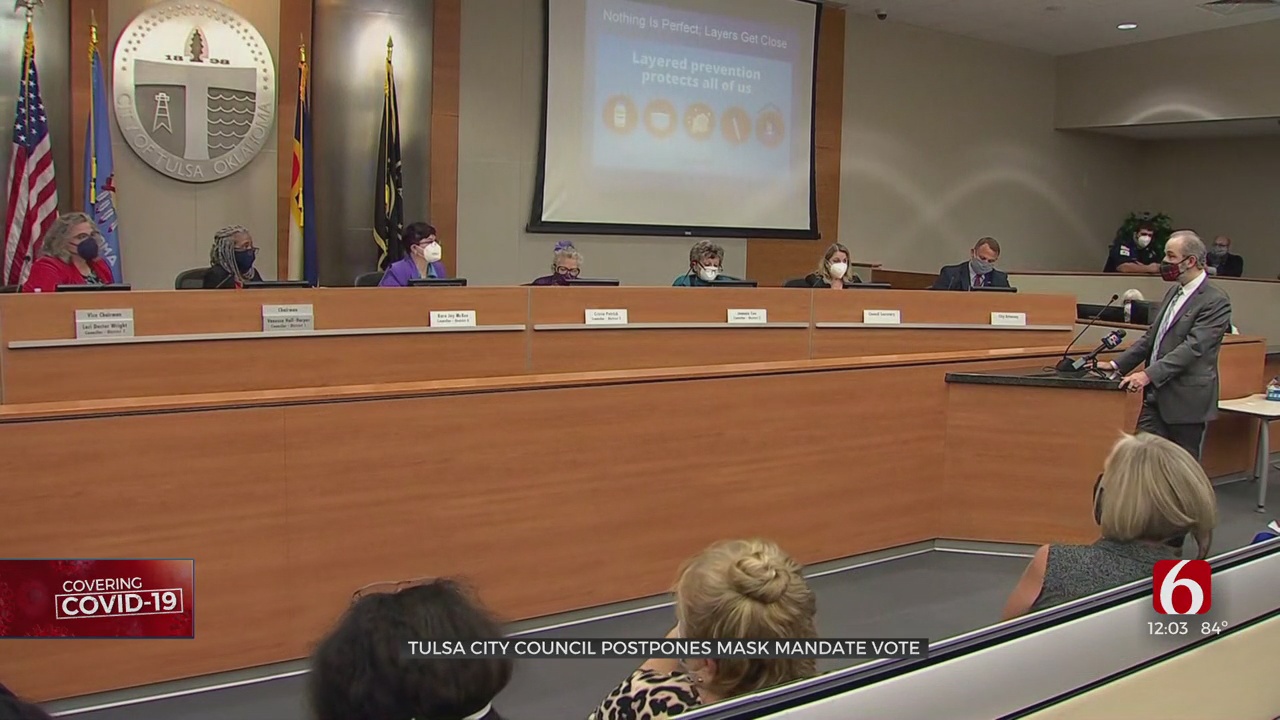 The Tulsa City Council pushes back a vote Monday night on a new mask mandate for Tulsa to another day.

After three hours of discussion, councilors ultimately voted to table the discussion until their next meeting.

Five councilors said they were ready to vote tonight, but four said they needed more time to gather more data. City Law says they need 6 votes or the majority of the council in order to be able to vote during a special meeting.

The city councilors who called the special meeting said there's growing concerns about spread of the virus, especially as kids head back to school.

The proposed ordinance would mandate that everyone four years and older would wear masks indoors, similar to the once in place last year. But some councilors said they don't believe this ordinance would do enough to stop the spread outside of school.

“We heard today that a lot of the cases are coming from surrounding cities and those are the cities that aren’t going to join us in a mandate,” said City Councilor Connie Dodson.

The Councilors who proposed the mandate say they know they couldn’t impose this mandate to make students wear masks in schools because of Senate Bill 658, but say they wanted to impose one for the places outside of school to prevent further spread.

“Kids spend a lot of time outside of school and so what we are proposing today is that when those kids are not in school and they’re in our community, the rest of us need to step up and protect them until they can be vaccinated," councilor Lori Decter Wright said.

Councilors said they didn’t want it to come to another mandate, but feel they need to do something to stop the spread.

“This is a different scenario this time. We don’t have any cities that are helping us. Whatsoever," councilor Phil Lakin said. "There’s no support from any of our suburbs and doe some of our suburbs I believe the support it’s further away than it was in the past."

Dr. Bruce Dart from the Tulsa Health Department was at the meeting in support of the mandate. He said cases are on the rise and Tulsa County did not reach herd immunity like he had hoped.

“We’ve got to get everyone to care,” said Dr. Dart.

Tulsa Pediatrician Dr. Elizabeth Dunlap said for the first time in her career, she’s struggling to find words for her young patients and parents.

“Today in my office I hugged five COVID-positive children and told them they would not be starting school this week,” said Dr. Elizabeth Dunlap.

Other Tulsans believe the choice to wear a mask should be up to them.

Another against the mandate said, “Bottom line, I would suggest freedom of choice is the way to go.”

Tulsa Mayor GT Bynum has said multiple times he does not want a mandate. In a News on 6 interview he said the only way out is to vaccinate.

State Representative Melissa Provenzano responded to his comment saying, “If that is true, then children under 12 are out of luck.”

The council will discuss the mandate again at their next meeting on August 25. If passed, the mandate would be in place until November 30.