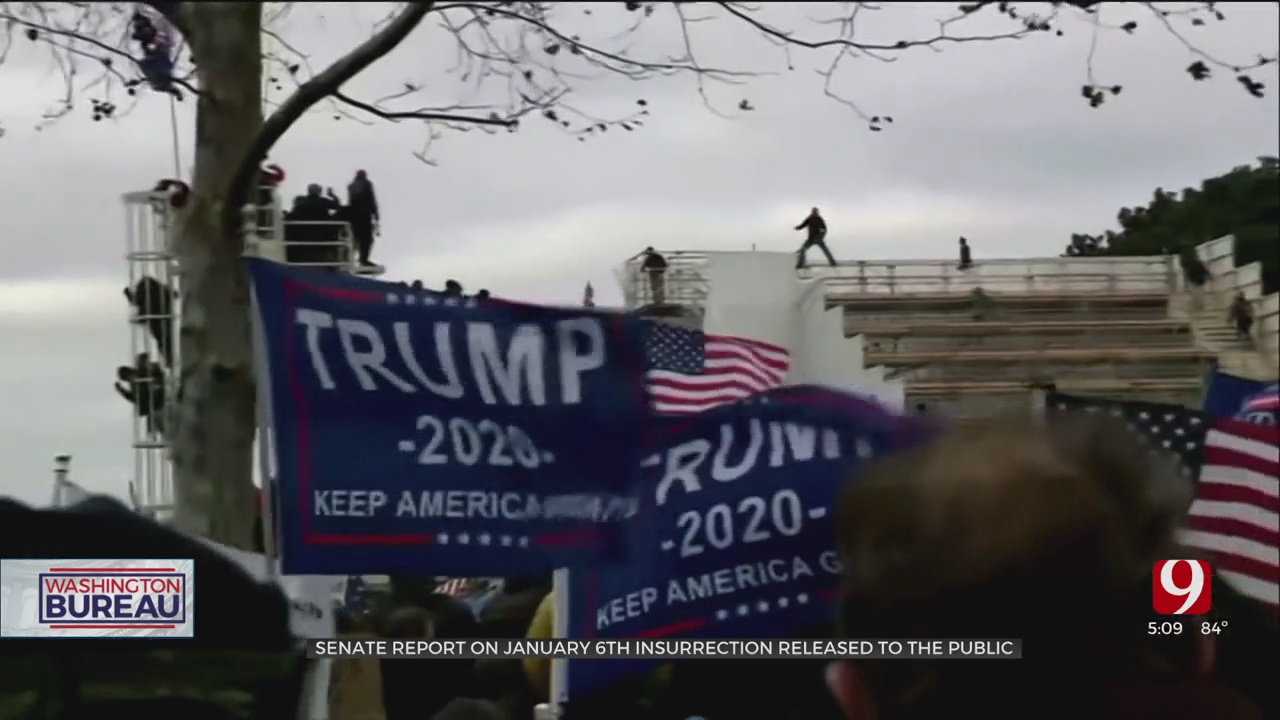 Leadership within the U.S. Capitol Police had intelligence on a potential armed assault on the Capitol weeks before the January 6th insurrection, but failed to take it seriously. That is one of the findings contained in a Senate report on the Capitol breach released Tuesday.

The report -- "Examining the U.S. Capitol Attack: A Review of the Security, Planning, and Response Failures on January 6" -- is the joint product of the Senate's Rules and Administration and Homeland Security committees.

Oklahoma Senator James Lankford sits on the Homeland Security Committee and said in a recent interview that the investigation was totally bipartisan.

"The Senate has had an equal number of Republicans and Democrats, equal staff working through the committees of jurisdiction." said Lankford.

At the time, Lankford was defending his vote against the creation of a 9/11-style commission to investigate the insurrection, saying that it wasn't necessary because the Senate had already done a thorough investigation and that the forthcoming report would be telling.

"We’ve worked through the process to try to figure out what happened, what went wrong during January 6th, how did security break down so rapidly," Lankford explained.

In its conclusion, the report states, broadly, “The entities responsible for securing and protecting the Capitol Complex and everyone onsite that day were not prepared for a large-scale attack, despite being aware of the potential for violence targeting the Capitol.”

More specifically, the report, which is based on multiple hearings and interviews, details how the Capitol Police's own intelligence arm learned of plans for an armed siege on January 6 several weeks before it happened, in mid-December. But the report said USCP leaders downplayed or overlooked the information.

"Part of the reason it was overlooked is people were saying, 'Well, this just can't happen.' and 'These groups of folks, they can't do that.' Well, now we know they can," said Sen. Gary Peters, (D) Chair of the Senate Homeland Security Committee, in an interview with CBS News.

The report includes 20 bipartisan recommendations, many of which can be implemented without legislation. But some would need Congressional action, including the recommendation that the chief of Capitol Police be empowered to request National Guard assistance directly.

Other recommendations include making improvements in Capitol Police training, equipment, intelligence collection, and operational planning, and having all federal intelligence agencies review and evaluate their criteria for issuing intelligence assessments.

The report did not get into the issue of what motivated the rioters or whether former President Trump's actions played any role in motivating them. That would, however, have been looked at by the independent commission Democrats were pushing, but which Republicans blocked last month.