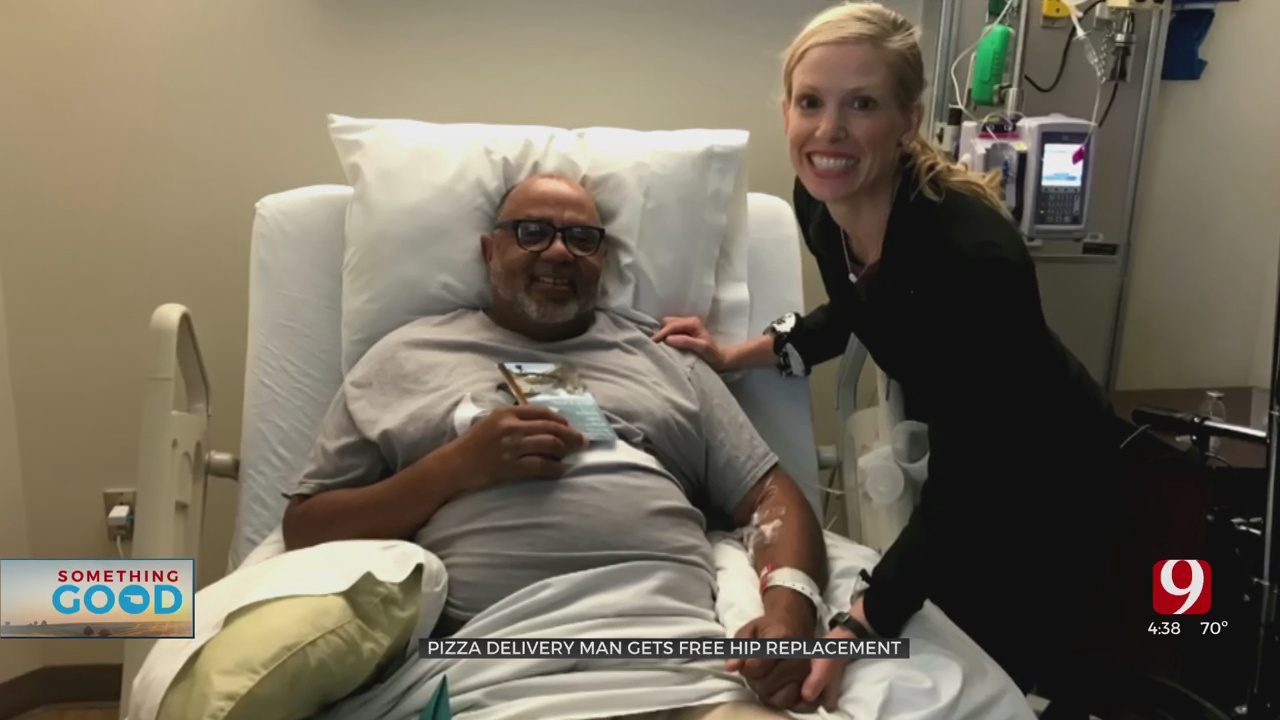 An Oklahoma City man who delivers pizzas day-to-day received the gift of a lifetime after a nonprofit medical clinic helped coordinate a hip replacement.

Raymond Walker, 64, is passionate about pizza and people he said.

“You’re expecting pizza today? Are you ready for this pizza?” Walker asked with enthusiasm.

He said he loves his job, “because I love to do it. It’s something fun to do,” at the Del City Pizza Hut off of Southeast 44th and Sunnylane Road.

Although Walker loved his job, he found himself in a dilemma. He was in dire need of a hip replacement and deliveries became painful.

"I had to crawl in and crawl out, to get in, I literally had to put my head in and then twirl around,” Walker said.

Walker said he dealt with the pain for five plus years. He said some days it was unbearable, but he said, “I worked through it.”

No insurance meant no way to pay for the more than $50,000 hip replacement. Walker said his only hope was to pray the pain would get better.

Then one day, an answer to prayer came. Walker found himself directed to the Ministries of Jesus, a nonprofit medical clinic for the uninsured off of Interstate 35 and Frontage Road in Edmond.

But what Walker found was so much more, a doctor and a clinic for the uninsured who cared.

Dr. Sara Burnett said after she did some imaging, it showed Walker had severe osteoarthritis.

“They prayed with me before and after my visits,” he said.

“When people like Walker come here they are suffering for a long time and they have no health insurance and no way to pay,” Kim Swyden, the executive director of MOJ, said.

Swyden said at MOJ, patients find a staff who cares, who prays with them, not only physically, but mind, body, and spirit healing.

Burnett said the medical staff and herself were going to do everything they could to find a doctor to who could give Walker a new hip.

MOJ coordinated the hip replacement for Walker. They found a surgeon, anesthesiologist and hospital that provided the surgery free of charge to Walker.

Walker lost weight, took his medicine, and within months, he qualified for the surgery.

Months later, Walker got his surgery free of charge. He described himself like a new man.

“It such an answer to prayer. He walked in and I remember saying, 'did he have walker? Did he have cane?' He was just so excited and everyone celebrated that joy with him," Burnett said.

Walker said he feels he has a new lease on life and he's back to delivering pizzas and getting to play with his grandchildren.

Ministries of Jesus in Edmond is located off of I-35 in Edmond is always looking for volunteers and staff. Click here for more information.