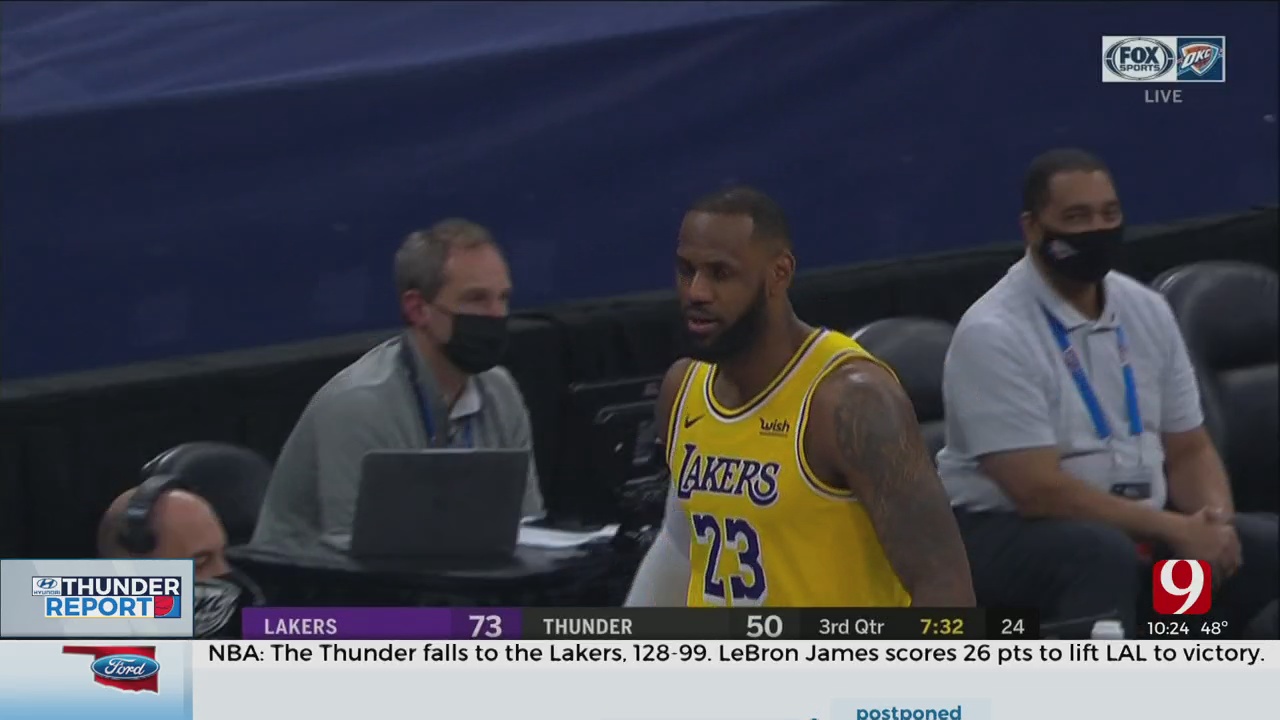 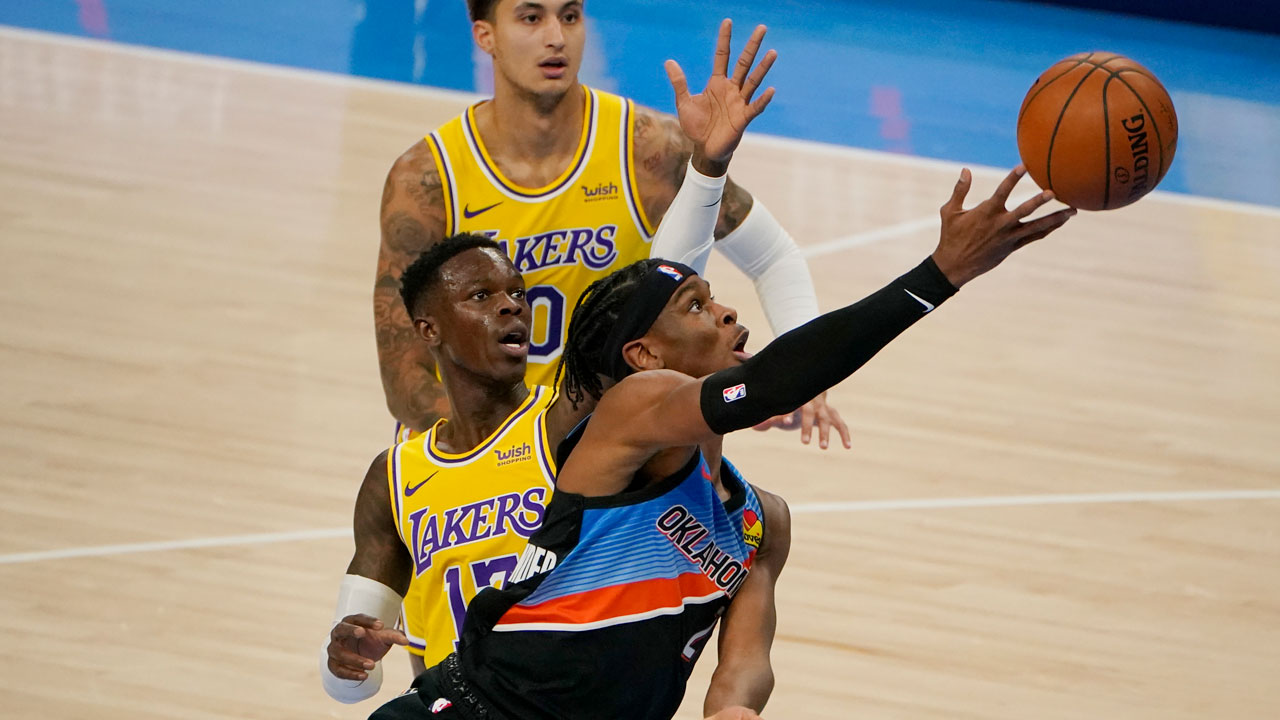 When LeBron James and Anthony Davis were announced as two of Los Angeles’ starters on the back end of their back-to-back, that told you exactly how tonight’s game was going to go.

It all went according to plan for L.A.

The Lakers, who built a lead as large as 31 points, defeated the Thunder in a 128-99 wire-to-wire victory on Wednesday night.

The Lakers are simply on a higher plane than everyone else.

Supersub-turned-starting guard Dennis Schroder made his return to Bricktown since the Thunder traded him during the offseason.

Schroder scored a modest 14 points, grabbed five rebounds and dished out five assists, but he was one of six Lakers to score in double figures.

LeBron James, the 36-year-old 17-year NBA veteran, didn’t look like he broke a sweat all night. Thanks to five 3-pointers, James cruised to a game-high 26 points, six boards and seven assists in just 27 minutes of action.

The Lakers best the Thunder from deep (17 3-pointers vs. OKC’s 10), rebounds (50 vs. 42), assists (26 vs. 23), free throws and just about everything else in between. It’s easy to see this Laker team lifting its 18th championship banner to the Staples Center rafters whenever this season's champion is crowned.

Schroder is now the second former Thunder player to win a game in Oklahoma City this season after ex-center Steven Adams and New Orleans rolled past Oklahoma City on New Year’s Eve.

Hill isn’t one to provide dry, postgame chatter where platitudes like “We played our game tonight” are rolling off his tongue. If Hill has something to say, he knows exactly how to make himself crystal clear.

A reporter asked Hill about the NBA and National Basketball Players Association’s agreement to tighten their COVID-19 protocols. Two of those amendments include eliminating visitors to hotel rooms and ending players and staff’s ability to leave their hotels for non-team activities during road trips. Via The Oklahoman:

“I’m a grown man, so I’m gonna do what I wanna do,” Hill said after the Thunder’s 112-102 loss to the Spurs. “If I wanna go see my family, I’m gonna go see my family. They can’t tell me I have to stay in the room 24/7. If it’s that serious then maybe we shouldn’t be playing. It’s life. No one’s gonna be able to just cancel their whole life for this game. That’s how I think about it.

“We wanna play the game,” Hill continued. “That’s what we love to do. But at the same time if we’re casting all these rules, this and that, maybe they need to reevaluate what we’re doing. If it’s that serious where you’re telling guys they can’t leave a room. I just don’t understand some of the rules as far as we can sweat 48 minutes with the guy next to us and the team next to us, but we can’t talk to him after the game. It makes no sense.”

Hill’s first quote is the most tantalizing, no doubt. The ‘I’m a grown man, so I’m gonna do what I wanna do’ line is why some may see Hill’s thoughts as whining from a handsomely paid and overprivileged professional athlete, but this is why I posted both of his quotes in their proper context. The quotes paint a clearer picture of why Hill feels the way that he does.

Hill loves the game, but he doesn’t think the game is his entire life. To him, his family carries more weight than a basketball does. Is he wrong to feel this way?

He also sees the NBA’s doublemindedness at play. If the league were serious about preventing players’ risk of contracting COVID-19, playing and traveling from city to city doesn’t seem like the best way to stay safe. Is he wrong?

Let’s say Hill opts out for the rest of the season, as many online have suggested, and decides to spend the rest of the winter and spring with his family. Hill, the owner of an 850-acre ranch just north of San Antonio, Texas, appears to be in a position to do just that if he wanted.

If Hill were to sit out, he would then be exercising another one of the privileges his job can provide that a lot of us do not enjoy.

So he goes to work.

No, there weren’t a thousand trades completed Wednesday, but there seemed to be a bit more movement today than usual. Tonight’s Thunder opponent is partly responsible.

Los Angeles completed a two-game road sweep of the Houston Rockets before it arrived in OKC for Wednesday night’s game. The Lakers won their matchups against the Rockets by a decisive 18 points Sunday and a 17-point win on Tuesday.

The back-to-back losses to the defending NBA champions were all former Thunder guard James Harden needed to see. Harden, who privately made his intentions to be traded from Houston known, publicly shamed his Rockets teammates and coaches after Tuesday’s game by saying things like, “I literally have done everything I can” and “It’s something that I don’t think can be fixed.”

Harden got his wish Wednesday. Houston sent him to the Brooklyn Nets as a part of a four-team trade including the Indiana Pacers and Cleveland Cavaliers. The Rockets received Brooklyn guard Caris LeVert, forward Rodions Kurucs and a treasure trove of draft compensation (three unprotected first-round picks in 2022, 2024 and 2026; four first-round pick swaps in 2021, 2023, 2025 and 2027).

Houston then flipped LeVert and a 2023 second-round pick to Indiana for former Thunder guard Victor Oladipo. The Rockets also received guard Dante Exum and a 2022 unprotected first-round pick from Cleveland via Milwaukee. The Cavaliers received center Jarrett Allen and forward Taurean Prince from the Nets.

Harden will soon be reunited with former Thunder brethren Kevin Durant, but he’ll join a roster with an unavailable Kyrie Irving, a new head coach in Steve Nash, his old head coach (assistant Mike D’Antoni) and a team defensive mantra that resembles a 45 and older rec league than an NBA team.

What could possibly go right?