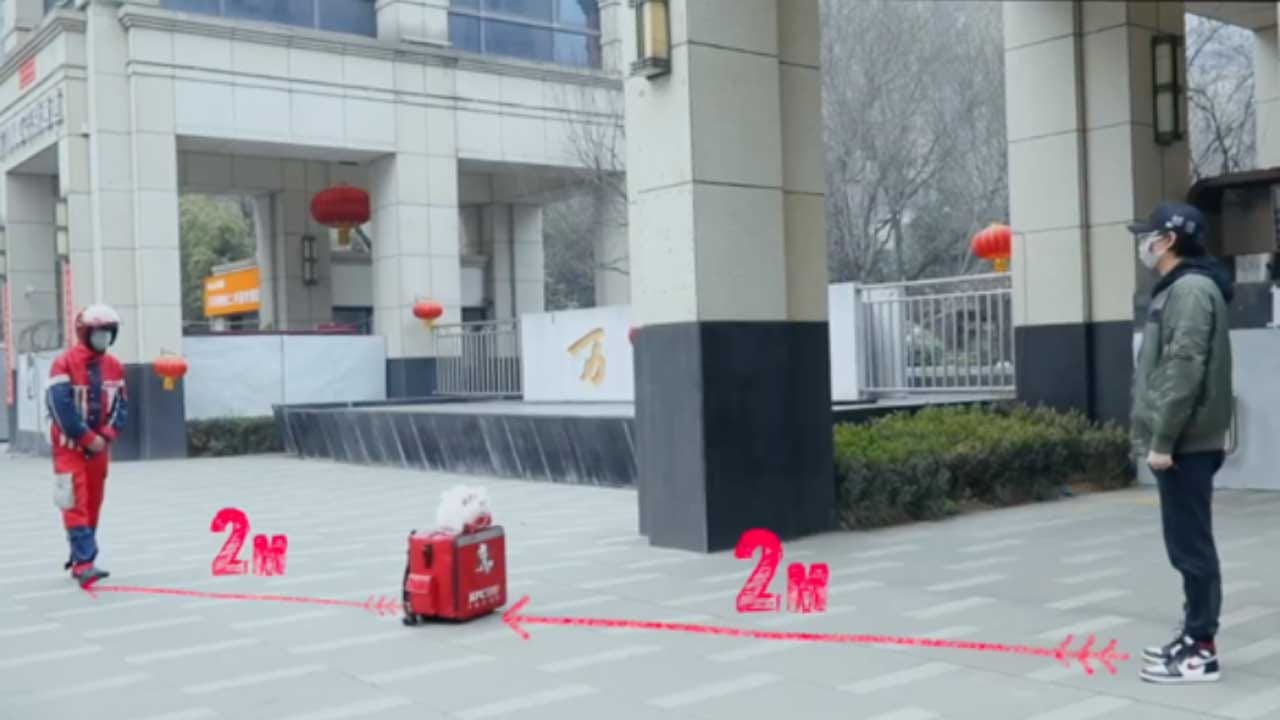 One of China's largest restaurant operators is trying to make sure the potentially lethal coronavirus paralyzing much of the country doesn't disrupt the vital task of delivering pizza and other foods.

Yum China, which operates nearly 9,000 Pizza Hut, KFC and other restaurants in the world's second-largest economy, has launched what it calls "contactless" delivery to avoid spreading the virus via food delivery. The fast-food company demonstrated its extra-cautious approach through videos on Chinese social media platforms WeChat and Weibo.

The videos show a delivery person having their temperature taken, applying a face mask and suiting up, before disinfecting all food packaging and leaving the restaurant. The food courier then drops the order at a location agreed on with the customer, while standing at least 10 feet away from the recipient.

KFC in one video shows an actor portraying a customer waving at a food courier from a distance after retrieving his meal as the deliverer bows.

Yum China said in statements on social media that the new delivery system is intended to give residents "peace of mind."

A collection of images on Pizza Hut's page on Weibo, a Chinese blogging site, shows workers having their temperatures taken and standing back when making deliveries.

"The KFC and Pizza Hut brands in China have launched a new range of contactless delivery services. They are also piloting order online pick-up in store contactless services at selected locations in China," Yum China said in a statement to CBS MoneyWatch."

The company added that it's using the new approach to ensure smooth food deliveries during a "period of significantly reduced dine-in traffic."

"The recent coronavirus outbreaks have caused significant interruptions to our business. The impact comes from temporary closure of our restaurants as well as substantial decline in sales to the restaurants that remained open," Ka Wai Yeung, chief financial officer of Yum China, said in a call on Thursday to discuss the company's latest financial results.

Yum said it has shuttered more than 30% of its nearly 9,000 various China-based restaurants and that traffic at remaining restaurants has been lighter than usual, owing to government-mandated travel restrictions and other precautions.

In particular, Pizza Hut, which has a higher share of dine-in customers than KFC, has taken a hit, according to Yum China CEO Joey Wat. "The dine-in business still drives the bulk of the business and therefore, the impact on Pizza Hut, unfortunately is harder than KFC," he said on the earnings call.

"These services have been well-received by customers and are playing an important role in ensuring that our delivery business continues to hold up during this period of significantly reduced dine-in traffic," the company said in its statement to CBS MoneyWatch.

The virus has killed nearly 640 people, all but two in China, with the other deaths in Hong Kong and the Philippines. More than 31,000 people have been infected worldwide, the vast majority of them in China. As of Friday morning, there were 12 confirmed cases of the virus in the U.S.

The U.S. Centers for Disease Control and Prevention warns that the virus can be transmitted from person to person if an infected person, standing within six feet of someone else, coughs or sneezes.