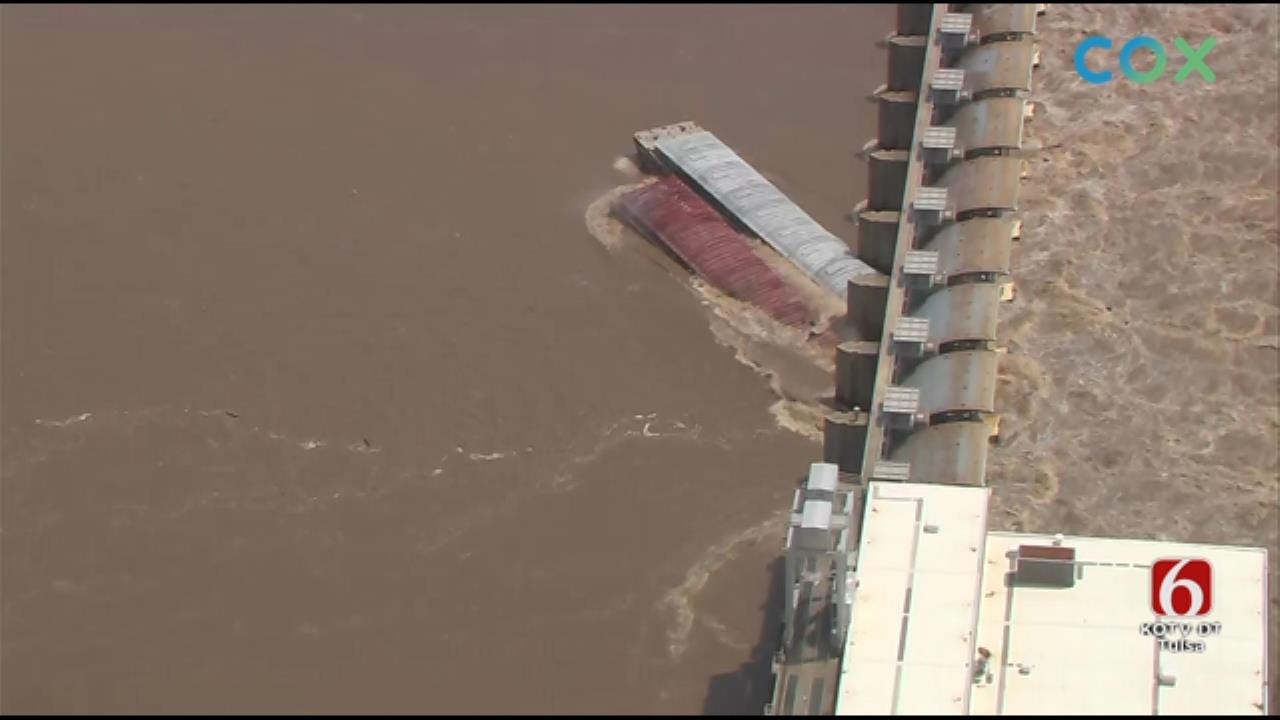 Two barges that broke loose on the Arkansas River in heavy flooding hit the lock and dam and sank around noon Thursday. It's the third time the barges had been loose on the river, threatening bridge and dam structures - but the dam held.

Interstate 40 near Webbers Falls has been reopened.

A crowd of about 30 people turned out to hear and see the crash.

While there was anticipation and even some excitement at the scene, people said they hope never to see this again. And they are thankful the barges didn't bust through the dam.

The Oklahoma Highway Patrol said the barges were a combined 3,800 tons. They were carrying a load of fertilizer.

An OHP trooper watching from the air said three gates stopped flowing water as strongly as the others after the impact. The Army Corps of Engineers said that is not a concern - the gates can handle the extra pressure.

The barges are currently submerged below the water on the upstream side of the dam. Debris from the barges is keeping the three gates from being able to fully close.

The Corps said it will have to wait for water to recede to have a complete scope of possible damage, but it appears the structural damage is minimal.

Colt, age 10, was one of the spectators who saw the barges hit.

"I really thought it would tear the dam up, but it took it just fine," said Brandon Chambers, a Warner resident.

The barges broke loose from the Port of Muskogee Wednesday as water levels increased in the river and amazingly missed the Highway 62 bridge supports, passing through without incident.

They are owned by Oakley Transport, according to the Corps.

The barges were corralled by Port staff but then broke loose again Wednesday night - prompting emergency evacuations in Webbers Falls downstream. They were found early Thursday near Spaniard Creek -  still tied together. Officials say the barges were stuck on some rocks about a mile from the Webbers Falls Lock and Dam 16 before breaking loose again.

Webbers Falls, in Muskogee County, continues to call for immediate evacuations because of flooding.

County Emergency Management said they are treating this event like a 500-year flood because they anticipate it to be catastrophic to the town.

Town officials said if the loose barges broke through this gate it would have been catastrophic for the town; so, they told people they needed to evacuate immediately if they hadn't already.

If residents do plan to stay, firefighters and police are asking people to write their names on their arms in permanent marker in case they need to be rescued later.