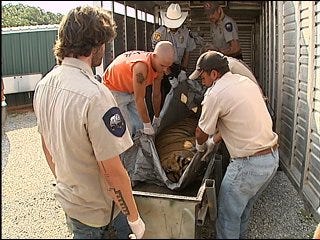 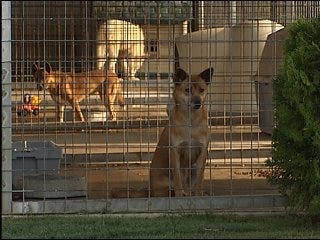 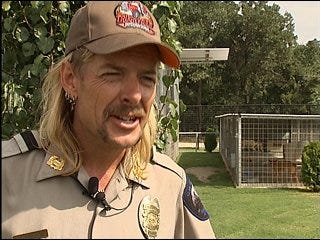 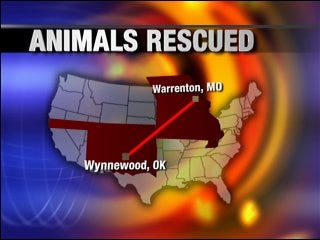 WYNNEWOOD, Okla. -- More than two dozen exotic animals arrived in Oklahoma from a wildlife park in Missouri on Sunday.

Twenty-two animals were unloaded by workers at the G.W. Exotic Animal Park.

Schreibvogel runs the park just off Interstate 35 and wanted to bring the animals to Oklahoma because the park they were kept in, in Missouri, is shutting down.

The decision to close that Missouri facility came after a volunteer was attacked by a tiger that was later euthanized.

"Yeah, that's what happened. Too many people bailed out and the guy just couldn't do it. He was just beat down and they needed help," Chris Brinkley, a G.W. park director, said.

Bringing the animals to Oklahoma was a quick and expensive decision. So far, the G.W. group has spent more than $21,000 transporting the animals and it's hoping to find more money to go back for the others left behind.

"We all left in tears yesterday. It's hard to leave 20 behind and know they may die," Schreibvogel said.

If the animals that are still in Missouri don't find new homes by the middle of September, they'll be euthanized, and as much as Schreibvogel would like to bring them here, money is tight.

The park is trying to focus on the new animals.

"Now one of the big challenges the park faces is finding enough room for the new animals, so what they are having to do is figure out which of the animals gets along with one another and then put them into some of the same areas," Schreibvogel said.

Oklahoma will likely be home for the new bunch for many years to come. Schreibvogel said other facilities, like his, are full and these guys aren't exactly ‘zoo quality.'

"Some are missing tails. A lot of them are thin and most are in real bad need of teeth work," Schreibvogel said.

Far from perfect, but just right for a group that prides itself in giving these animals a second chance at life.

"I'm pretty proud of what we've done here. It's a heck of a step up," said Schreibvogel.

If you'd like to learn more about how you can help the new animals, visit the G.W. Animal Park's Web site.