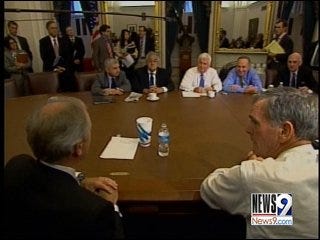 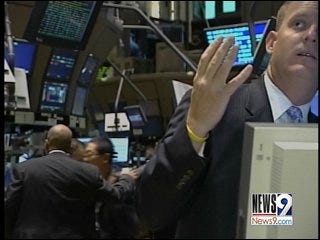 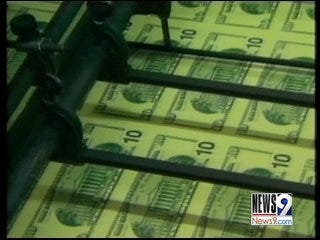 OKLAHOMA CITY -- After lawmakers announced Thursday morning they reached an agreement on the financial bailout, the emergency economic summit continued throughout the evening at the White House.

President Bush and other congressional leaders were presented with the lawmakers' plan to administer economic first aid to Wall Street.

In Oklahoma, experts report the state's economic standing is doing well, and has fared better than other parts of the country, but after the President's dire warning in Wednesday night's speech, the experts' assurance has since lost its weight with some Oklahoma residents.

"We are in the midst of a serious financial crisis," President Bush said.

"The government's got no business bailing out private enterprise," resident Mike Jones said.

Others disagreed with the focusing on just one company.

"If they're going to spend that amount of money on one company, it needs to go to the general public," resident Jill Ridley said.

Bailout or no bailout, Oklahoma residents are concerned about their investments.

"At this point in our life, we are thinking about retirement and 401-K and our investments, our CD's and things," investor Marsha Thompson said.

Bob Rader, the executive Vice President of Capital West Securities, said he understands the worries and the strong emotions of those who have invested money, but according to him, it is not the time to panic.

"We all ought to be concerned, absolutely," Rader said. "I think what a person needs to do...reduce your exposure to what we call the sleeping point. If you're waking up in the middle of the night, you're concerned about you investments, you can always go into cash. The banks are solvent."

All banks are safe, if insured by the FDIC, and according to Rader, U.S. Treasuries are even safer.

Rader said as much as anything, people can help themselves by living within their own means. He recommends reviewing investments and figuring out an individual's comfort level.

"And if you need to do something, call your financial advisor, talk to your banker and get some guidance some way, but don't let fear take over," Rader said.

Local financial advisors also said Oklahoma banks are still safe places to put your money, in part because the S&L collapse of the '80s taught them to be conservative.