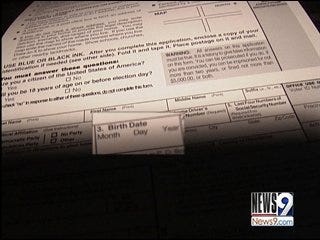 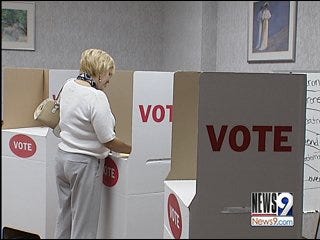 OKLAHOMA CITY -- For the next nineteen days, Barack Obama and John McCain will court the valuable vote.

In Oklahoma, voter registration has also reached a fever pitch.

Since August, 8,600 people in Oklahoma County registered for the first time, 4,500 of those are Democrats and 2,900 are Republican.

Election officials are still reviewing and even rejecting some applications.

Joanne Lechleiter said she left out key information when she filled out the registration form, and because of the discrepancy, she is not eligible to vote in Oklahoma.

This year's election is considered one of the most important presidential races in American history, but Lechleiter won't have a vote.

"For the first time in my adult life, I can't vote," Lechleiter said.

Lechleiter did not list her date of birth on her voter application, but she said the county is also at fault, because she didn't learn of her mistake until it was too late.

"What aggravated me was the fact that the letter was dated the 8," Lechleiter said. "It wasn't postmarked until the 13, which was after the deadline where I could have rectified the situation and still voted."

The county election board said that never should have happened, but it said it all could have been avoided.

"We always try to encourage everyone to try and register well before the deadline," Doug Sanderson of the county election board said.

According to state records, Lechleiter filled out her application October 2. Her records were sent to the state election board and received by the county on October 8. The application was processed and rejected that same day. A letter was printed and mailed later in the week, making it impossible for Lechleiter to have received it before the deadline for voter registration, which was October 10.

Lechleiter can get still vote via absentee ballot in Georgia where she last lived, but she said she hasn't lived there in six months and she wouldn't feel comfortable doing that.

The county election board estimates that 30 out of every 1,000 voter applications will be rejected because of similar omissions.