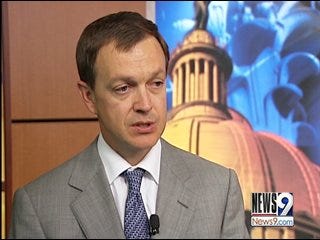 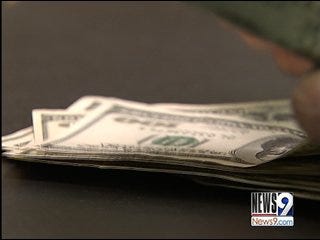 OKLAHOMA CITY -- The national economy may be heading toward a recession, but Oklahoma continues to show revenue growth. However, that's only a snapshot because eventually the nation's economic woes will impact Oklahomans.

The latest figures from the State Treasurer's office reflect a robust economy. The state took in over $490 million in October- that's ten percent higher than in the same month last year.

"Our economy in Oklahoma is holding up very well. We're not seeing near the problems that we're seeing across the country," State Treasurer Scott Meacham said.

Revenue is higher than a year ago in sales taxes, income taxes, oil and gas taxes, but no one expects oil and gas to stay at that level. Currently the only tax producing lower revenues than last year is the Motor Vehicle Tax, which comes from the sales and licensing of vehicles.

"We started seeing pretty severe price drops in September and October, so we haven't really started seeing those in our revenues yet. We expect that starting next month we're going to see dramatically lower gross production tax receipts," Meacham said.

If belt-tightening becomes necessary, a state lawmaker said the Legislature is in an enviable position.

"We've had very conservative spending policy. We've actually spent less, even though we've had more to spend, and we've managed to sock away in our rainy day fund something in excess of $600 million," Rep. Randy Terrill said.

The State Tax Commission is seeing a lot of people taking advantage of Clean Slate '08, the tax amnesty program. Collections were predicted to bring in $34 million, but when the program expires Nov. 14, it's actually expected to produce $50 million.

State Treasurer Meacham thinks the legislature will face a situation of flat or declining revenues when it convenes next year. Lawmakers won't know how much money they will have to spend until the state Board of Equalization approves its revenue estimates around Christmas.