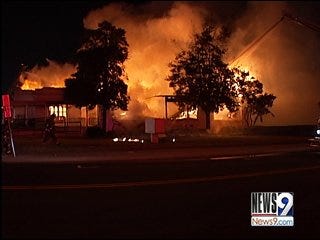 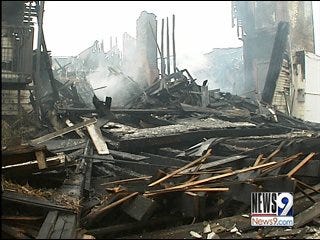 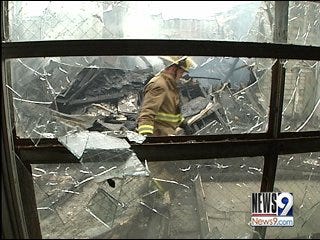 The firefighters were able to contain the blaze enough to spare God's Creation Worship Center that sits just 20 feet from where the fire occurred.

"Our sanctuary had suffered some damage to the south side windows, the church is completely smoked out," Pastor Mike Cornegay said.

The pastor had to call off Sunday services. He also has to find a place to take the smoke damaged clothing that was meant to go to struggling families and the homeless, the same people that had taken shelter in the abandoned funeral home that was destroyed.

"In fact we've been ministering to some of the guys over there, so we do know some of the faces that are in and around this area," Cornegay said.

He's thankful no one was injured or killed in the fire, but worries it's only a matter of time before it happens again. This time of year vacant buildings become havens for the homeless, and firefighters said that is likely what caused the fire.

This blaze marks the beginning of a long and busy season for firefighters.

"A lot of these people are going to get inside these buildings or wherever they can, start some fires, try to keep warm and it's very common for it to get out of control," Battalion Fire Chief Al Cothran said.

The pastor doesn't know when services will resume, but said he would be happy to receive clothing and food donations to replace the ones that were ruined by smoke damage.

If you can help, send your donations to the church at God's Creation Worship Center P.O. Box 3183 Oklahoma City, OK 73101.