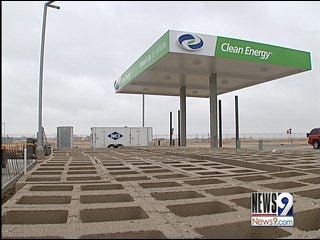 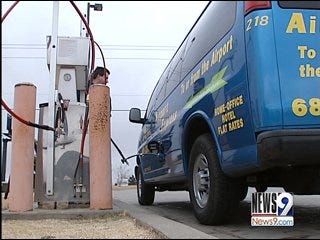 OKLAHOMA CITY -- If you take a trip to the airport, you may notice something new these days.

Crews are working on a Compressed Natural Gas fueling station. The station is expected to change more than just the landscape.

Among the vehicles that pull up to Will Rogers World Airport are the blue vans from Airport Express. Behind the wheel of one is Nathan Lamirand, who treks to and from the airport many times each day.

His is just one of 90 Airport Express vehicles and is one of a small group converted to use Compressed Natural Gas.

CNG stations are few and far between in the metro, which is why the one being built by Clean Energy is so celebrated. It provides Airport Express an opportunity to convert more vehicles. Managers hope to convert all 40 based at the airport.

They aren't alone. This is the 20th airport where Clean Energy has put a pump.

"If you looked at the average savings at our airports over the last 12 months it would be anywhere from $1 to $2 per gallon in fuel savings, so that's just millions and millions of dollars," James Orsulak with Clean Energy said.

That's something airport and airline executives want a part of as well.

"We look to converting our entire fleet over starting with our shuttle vehicles first," Mark Kranenburg with Will Rogers World Airport said.

It's a savings Lamirand knows firsthand, but he said it's not all about the money

"I got two kids and it's important that we take care of the environment," Lamirand said. "I want to see my kids live long, healthy lives."

The CNG station at the airport will be open for public use as well and is expected to be up and running in about three weeks.

Clean Energy is also building another station in Oklahoma. They'll be putting one in Stillwater for OSU's vehicles.