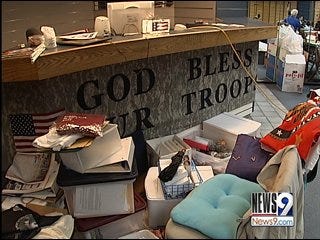 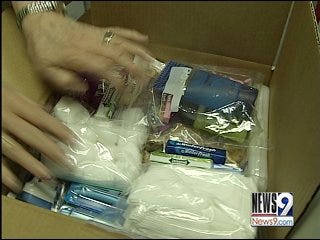 OKLAHOMA CITY - Although the HUGS Project now needs funding for 2009, their holiday care packages were a huge success.

The response the Hugs Project has received encourages them to stick with it, even though Christmas is over.

The Hugs Project is moving their headquarters from one site in Crossroads Mall to another, but their mission stays the same-- to send hugs to troops in Iraq, Afghanistan and around the world.

For Christmas, volunteers packed, stacked and shipped out 18 tons of boxes filled with things like DVDs, thumb drives, cookies and socks. The contents totaled $25,000, and the postage cost $30,000. But the money spent and time donated was worth it.

"We got so many letters of love and support back from the troops this year. It was just almost overwhelming. This morning when I woke up, the email inbox was full again of more letters," Karen Stark with the HUGS Project said.

Here are a few of the emails the HUGS Project has received as a thank you:

"I don't have family to support me so I was pleased to have something for the holiday season."

"This time of year is especially difficult being so far from home, your thoughts and prayers make it so much easier."

"Just please know that you are making a difference to the soldiers over here and that we appreciate it very much."

Setting up shop in their new space has taken most of the group's post-Christmas time, but they will continue their efforts as long as troops are stationed overseas.

"You just have to do what you can to help. It's the right thing to do," Peggy Simmons, a HUGS Project volunteer said.

With Christmas spending, the HUGS Project is now tapped out. They have absolutely no money left to start 2009. To make a donation, visit the HUGS project Web site. They have set up a paypal account for people to help the cause.