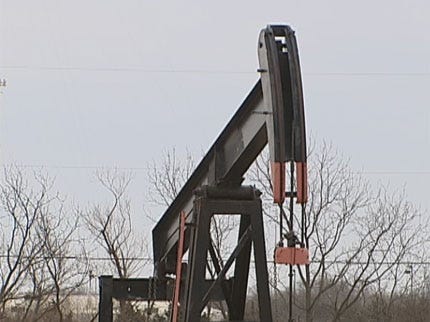 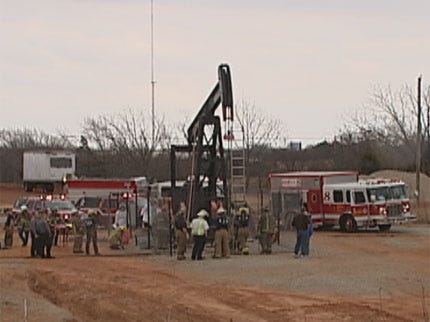 OKLAHOMA CITY -- A 17-year-old lost his arm Sunday after trying to ride an oil pump jack.

The incident happened at N.W. 104th Street and Hudson Avenue. The victim, a 17-year-old, and his friend climbed the fence, turned on the equipment and tired to ride the pump jack, firefighters said.

Oklahoma City Fire Deputy Chief Clay said when they arrived on scene they realized a "field amputation" was necessary because the 17-year-old's arm had been pinned and crushed.

"Try to remember that what appears to be fun may end up deadly or maiming. I would caution when they hear stories about riding oil or pump jacks, or messing with them, to just write that off. It's not fun when something bad happens," Deputy Fire Chief Clay said.

The friend flagged down a taxi driver to call an ambulance and help turn off the equipment.

The victim's arm had to be amputated at the scene. The teen was airlifted to OU Medical Center.

The victim's name and condition have not been released.

The company that owns the pump jack, Toland and Johnson Inc., said they are upset by the incident, and wish the teen the best in his recovery.

Steve Slawson, Education Chariman of the Oklahoma Energy Resources Board, said their group sends out crucial messages on the dangers of oil well sites, but it can't be repeated enough.

"An oil well is like an outdoor factory, it's got moving  machine rigs, electrical connections and combustibles and it's dangerous," Slawson said. "My hope is through his bad experience that other kids will get this message to stay away from oil well sites."

Many pump jacks turn on and off by an automatic timer. In Oklahoma City, well owners are required to fence their machinery, but there is no requirement to hide or key the manual on-off switch, said Mindy Stitt, executive director of the Oklahoma Energy Resources Board, which cleans up abandoned oil wells and educates the public about the industry.

She said representatives from her organization frequently visit schools and tell children to stay away from the thousands of pump jacks that dot the landscape in oil country.

Other accidents involving young people and oil field equipment have occurred over the years, including the deaths of three children who sparked an explosion by lighting a match near an oil tank in Duncan in 1996.

Well Site Safety Fast Facts (According to the Oklahoma Energy Resources Board):

Oilfield equipment can be extremely dangerous, and people should not "hang around" tank batteries and pumping units. Some of the dangers are:

• The smallest spark-especially a cigarette or lighter-can cause an explosion from fumes or flammable liquids.
• Anyone opening a hatch might be overcome with fumes and pass out.
• The stairs and rails, which can be as high as two stories, can be covered with oil and be slippery, causing someone to fall down the stairways or over the side.
Pumping Units
• The counterweights weigh up to 20,000 pounds, and will crush a human body without stopping. Anyone falling off the beam or trying to ride the weights can be seriously injured or accidentally killed.
• Anyone trying to grab the cable or the front of the unit can have their hands cut off as the cable travels up and down.
• The numerous moving parts of a pumping unit can catch, then injure, or even kill, a person.
• Electrical boxes, wires and components operate at high voltage. Anyone touching them could receive serious electrical shock.

**NOTE: Even if a pumping unit is stopped, it is not safe. Many units are on timers, which can start without warning, causing harm if a person is on the unit.