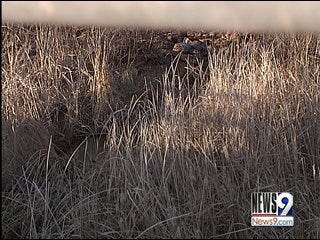 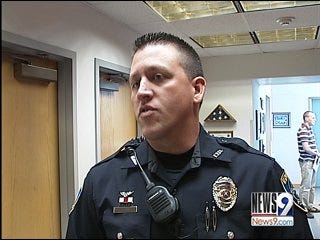 EDMOND, Oklahoma -- Police are searching for suspects who dumped a number of skinned and mutilated coyote remains near a creek by Santa Fe High School Friday afternoon.

Edmond police said the animals were likely killed somewhere else then dumped at the school.

"The animals appear to have been mutilated, possibly shot as well as fur and coats have been skinned," Edmond police officer James Hamm said.

Authorities found the bodies of six skinned coyotes floating in and out of the water. All of them had their front legs cut off which were also found nearby.

"It's kind of frightening to think that somebody was out here either shooting coyotes or disposing of the carcasses, it contaminates the water and wildlife around here it's not good for us," Santa Fe High School teacher Chelsea Foo said.

It's illegal to dump dead animals into water. However, anyone with a hunting license can shoot coyotes year round. They are supposed to dispose of carcasses through burns or by burial.

Edmond police believe whoever dumped the remains skinned the coyotes to sell the coats for money. Lab workers found a total of 22 bullets in the animals.

Police are still investigating the incident and want anyone with information to come forward. Call Edmond police with any information.