News 9's David Payne Talks About Some Of Friday's Chase Deadly Tornado Strikes On I-40 Near El Reno OHP Captain Talks About Clearing Damage From I-40 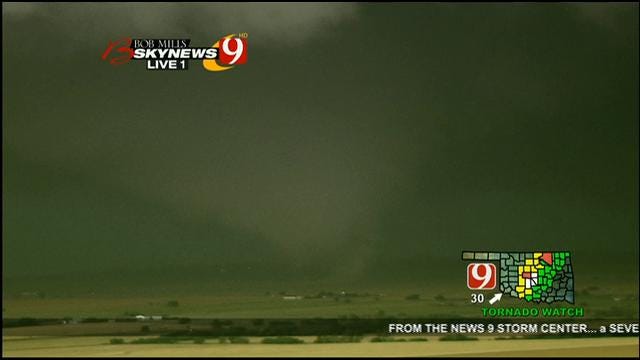 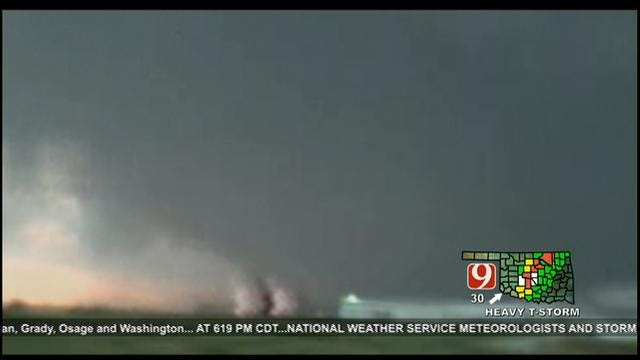 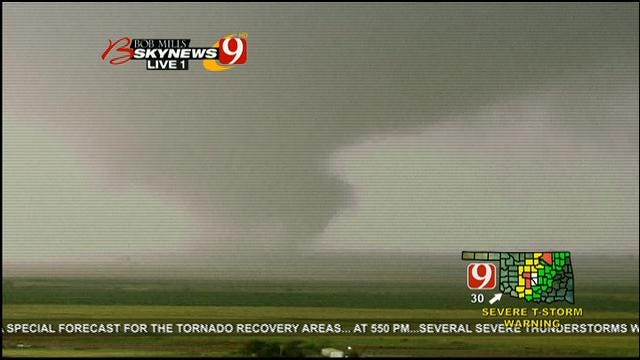 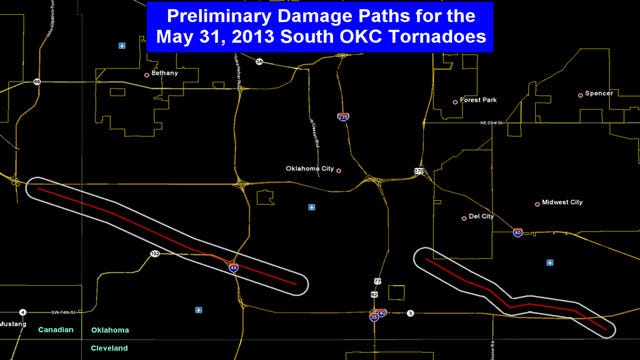 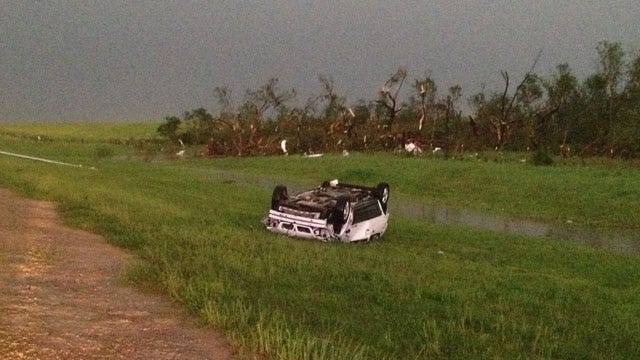 OG&E has released the following statement regarding downed lines around the city.

Stay away from power lines and anything they are touching. They are bare wires and not insulated. Downed power lines may appear to be harmless but could be live.

OG&E is now reporting a total of 78,332 customers without power across the OKC metro area.

The Oklahoma Highway Patrol has reopened Interstate 35 in Oklahoma City.

EMSA has reported to News 9 that they have fielded nearly 300 calls to 911, with 39 total storm-related injuries transported to local hospitals.

OG&E is now reporting a total of 79,645 customers without power across the OKC metro area.

Integris Health System spokeswoman Brooke Cayot says three of the system's hospitals received close to 50 patients and that five are in critical condition and one of those critically injured is a child.

Two of those critically injured were in vehicles that were on Interstate 40 west of Oklahoma City when they were caught in the tornado.

OU Medical Center officials say they have extra staff to handle injuries if need be, per standard protocol. At this time they say they have only had three children with storm injuries and two adults at the main hospital.

Heavy flooding and stranded vehicles are visible on Reno between Rockwell and Council.

OG&E is reporting 74,113 customers without power across the OKC metro area.

Police have blocked traffic at NW 63rd St. and May Ave. due to heavy flooding and several stranded vehicles.

Flooding reported in Midwest City at SE 15th St. and Douglas Blvd. A couple cars are under water. No damage reported in Del City.

OG&E now says 71,550 customers are without power across the Oklahoma City metro.

OG&E has upped their outage total to 68,025 customers across the OKC metro area.

From the Department of Public Safety:

The Oklahoma Highway Patrol urges  motorists to stay off highways and interstates to relieve traffic congestion.  Severe storms dumped massive amounts of water on roadways this evening as thunderstorms passed through Oklahoma City and surrounding areas.

Troopers are working to clear traffic on the cross town, but there are still areas of flooded roadways in the following locations:

I-40 and Air Depot (impassable with high water).

There are power lines down at I-40 east and west bound near mile marker #129.  State Troopers are working several collisions and weather related incidents with multiple injuries.  Numbers are unknown at this time.

All travel throughout Oklahoma City and surrounding areas is discouraged.

Chief Brown with El Reno Police says the city is in pretty good shape, just some flooding. Interstate 40 and US 81 have many power lines down. Officials are trying to open a shelter at this time with the Red Cross.

Oklahoma City police is urging everybody to stay off the roads in the metro right now.

OG&E reports 66,071 customers across the metro are still without power.

Reporter Alex Cameron says I-44 westbound at Broadway Ext. is down to one lane due to flooding.

Steve Shaw says southbound May Ave. at Gordon Cooper Blvd. is impassable from high water. Several stalled cars are in the road and a stuck EMSA ambulance is in the grass median.

I-40 is open at Banner Rd. OHP is allowing vehicles to pass despite center cables being on the roadway.

Severe storms have produced multiple tornadoes, beginning southwest of the town of El Reno, Okla. and changing directions sporadically, all while seemingly following along Interstate 40 and heading east, Friday afternoon.

Strong storms also formed north of the metro, in Payne County and in the vicinity of Stillwater, Okla. So far there have been few reports of damage.

Large hail, some reportedly the size of baseballs, have accompanied these storms.

I-40 east of the metro has been completely shut down and there have been reports of a semi-truck overturned. OHP Troopers are asking drivers to stay off the highway.

OHP is reporting multiple cars flipped, multiple injuries, and several power lines down on I-40 and Cimarron Rd. Troopers urge all people on the highway to get off and go south at least 10 miles.

Authorities confirm five fatalities; a mother and her baby, at I-40 and Cimarron Rd. in Canadian County. Two other victims were found in a car near SW 15th St. and Choctaw Rd. in Union City. And one other person near NW 10th St. and Radio Rd. in El Reno.

People at Will Rogers airport have been asked to take cover as the massive storm system approaches the area. All flights have been canceled and the airport is officially closed. Authorities say approximately 1,200 people are at the airport.

OG&E is currently reporting approximately 65,718 customers without power across the metro.

The tornado that formed near El Reno continued on and formed a new tornado in Mustang, also moving to the east and on into downtown Oklahoma City.

Moore Police are reporting multiple vehicles overturned near 4th and I-35, and power lines down at 4th and Broadway and N. 27th and Bryant.

The H.E. Bailey Turnpike northbound lanes, at mile marker 107, have been shut down due to tornado events. Northbound Interstate 35 from Purcell, Okla. and to the north is closed because of the storms.

OHP says all major interstates into and out of the Oklahoma City metro are closed. Troopers advise drivers to avoid the metro for the time being.