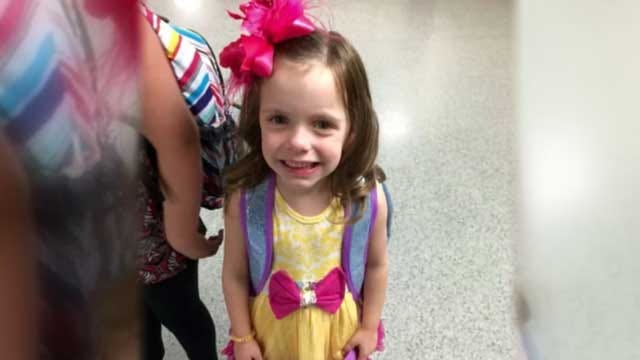 The state of Oklahoma has reported 16 new flu deaths in the last week. And among them was a little girl who captured the hearts of thousands.

When News 9 first told you about 5-year-old Emmy Waddle, thousands responded to the family's Facebook page “Praying for Emmy.” On Thursday those prayers continue and the family is finding comfort in their faith.

"Every child is a gift from God and she can't be replaced. Our hearts are broken," said Emmy's mom Leah Waddle.

When we spoke with Emmy's mom Leah earlier in the week, she spoke of what a gift Emmy has been: A five-year-old whose smile shines brighter than her favorite color. A kindergartner who just read her first book. And a sister to three unlikely siblings.

"We were told we would never have children and we have four and to have one of the four, our heart it just stopped," said Leah.

That was how Leah described sitting in the hospital with Emmy. Her youngest daughter was in a coma, her brain was swollen and her vital organs were not fully functioning, all from complications with the flu and strep throat.

"It's a feeling of you can't breathe," said Leah.

Leah and friends reached out for prayer by way of this Facebook page “Praying 4 Emmy.” And in only two days, it received over 24,000 likes. Friends and family donned pink to show their support.

Moments later, another post: "It is with saddened and broken hearts that we lost our precious baby princess... Emmy had an amazing life and we were blessed by the Lord to have the opportunity to share it with her."

The day after losing Emmy, her father Dylan spoke with News 9 on the gift she will now be forever more.

"You have to realize the things on this Earth are temporary and everything else is eternal. I truly believe God is in heaven holding her in his arms and he will be with her until we get there," said Dylan Waddle, Emmy's father.

Learn more about how you can help the family.

Friends and family will also be selling T-shirts in Emmy's honor.