OSU Remembers The 10 On 14th Anniversary Of Plane Crash 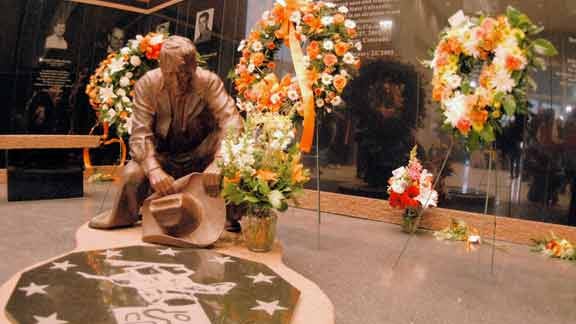 It was a day many of us will never forget. On January 27, 2001, ten members of the Oklahoma State University family, including News 9's own Bill Teegins, died in a plane crash. The men's basketball team was returning home from a game in Boulder, Colorado when their plane crashed in a snowy field.

“I received one of the calls that night,” recalled Mary Lee Draper, who was working in the basketball office back then. She said she still does and she walks past the memorial daily. But this day she said she celebrated the lives of those lost.

“They were all such bright spots, I felt so privileged to know all of them.”

Throughout the day, family and fans stopped by the memorial outside Gallagher-Iba and left flowers and signs. Some were like Ryan Hill, who didn't personally know any of the ten people killed that day. But ever since he became a student, he has made a point to come to the memorial every Jan. 27.

“Coming here just to pay my respects,” he said.

The goal was to never forget and for many in the OSU family, that's the easy part.

“I've had people e-mail me and text me saying I have trouble remembering my wife's birthday or my anniversary, but I will never forget this date and I think a lot of OSU people feel that way,” said Kevin Klintworth, the OSU Director of Athletic Media Relations.

The hard part was remembering. “Very heartbreaking time in our lives,” said Draper.

OSU will hold a dinner for family members Tuesday and a special ceremony at the game.

OSU Remembers The 10 On 14th Anniversary Of Plane Crash