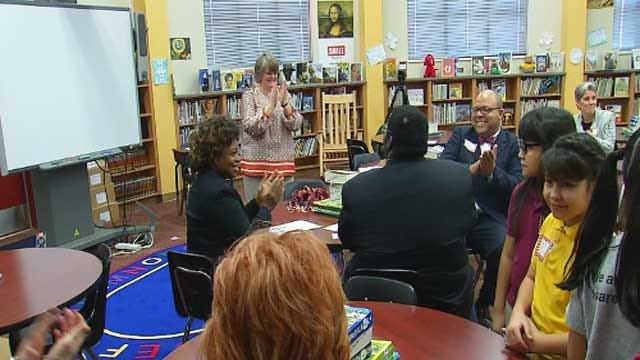 The district invited lawmakers to ride the bus and visit face-to-face with teachers and students on Wednesday.

District leaders want elected officials to change their perception and get a reality check on what a typical Oklahoma school day is like.

“I think it's so powerful to be here,” said State Rep. Mike Shelton, (D)-Oklahoma City.

They talked with the ones most affected by their upcoming decisions, teachers and students. Several 10-year-olds told the elected officials they are stressed over standardized tests.

“I think we should have more practices before the test so we don't get as stressed,” one student said to the group.

Another student followed, saying, “The test they get us stressed out and we don't have time to learn about other stuff.”

“Or get more teachers because we are cramped in one big space,” a little girl said. “It would give us more teacher attention,” she added.

“From the mouths of babes,” said OKCPS Superintendent Dr. Rob Neu. “We are over-assessing our kids and I think we've got to really change our focus,” he explained.

The 3rd grade reading test was also a big talker.

“We are prepared to make changes to ensure that if we are going to keep the reading law on the books, that we make it workable for not only the school, but for families,” State Rep. Shelton added.

Teacher pay was another big concern lawmakers heard about.

One teacher said she is making more than $11,000 less than the OU classmates she graduated with because they left Oklahoma to teach elsewhere.

The kids also said they wanted more PE or exercise time and storm shelters in the school so they would be safe if severe weather. The kids did not hold back and they hope their messages will be carried to the state capitol.