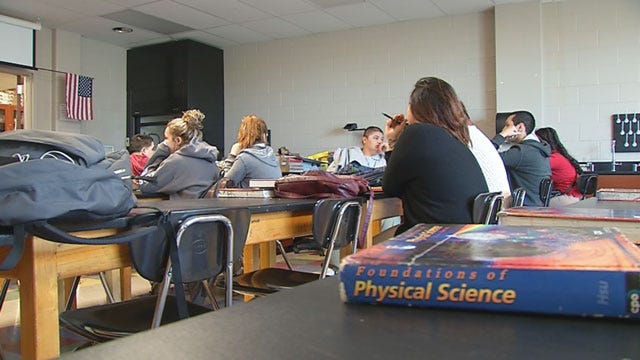 Parents who want to send their kids to private school could get state funding for tuition if supporters of a new proposal get their way. A bill that would establish 'Education Savings Accounts' is making its way through the Legislature right now.

Positive Tomorrows is a private school. But its 50 students are all either homeless or in transitional housing.

“We work on dealing with all the barriers that these kiddos face,” explained President and Principal Susan Agel. “We work on getting them up to speed academically and socially to get the family stabilized, get them all together so we can move them back into the public schools and they do really well.”

Ninety-five percent of their funding comes from private donations. The implementation of Education Savings Accounts would allow them to receive state funds.

“Since it's our goal to take children that it's very difficult for the public school system to serve and get them to the point where they can do well in the public school system, it just makes sense that we obtain some funding for those kids,” said Agel. “It would help us serve more children and it would help us serve the ones that we have better.”

But opponents argued the state has about 30,000 children in private school and the money given to those parents would come from public schools that are already struggling from depleted resources.

“For every child we take away from the public school and put in the private setting at state expense, we need state resources to do that.” said Ryan Owens, General Counsel and Director of Legislative Services for Cooperative Council for Oklahoma School Administration.

A vast majority of education groups opposed the measure, arguing not only does it divert money from schools, but provides parents with an incentive to pull their kids out of public education.

“If you pull your child out of those systems there's no guarantee the child receives a quality education,” said Owens.

Parents would receive the funds on debit cards and would have to justify expenditures with the state. If parents don't spend all the money they receive from the state they could keep it to pay for college later on.