Chickasha Police End Up In Scuffle With Drunk Suspect 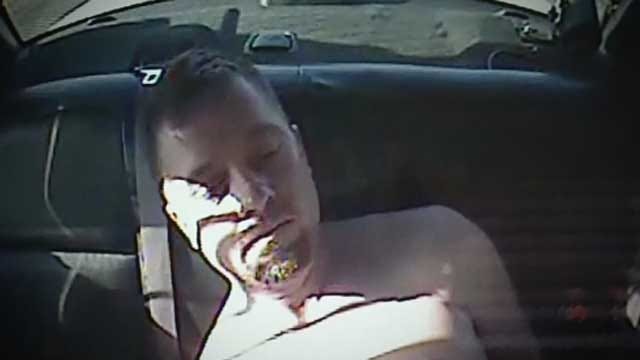 Police in Chickasha ended up in a scuffle with a suspect, as they tried to put him in cuffs. The suspect started kicking and some of the incident played out on camera.

In the beginning the call wasn't urgent, but by the time it was all said and done it took a lot of manpower to take one man to jail.

You can't really make out what he's saying in the video, but Elvie Eugene Mandrell, Jr. made a statement when he had a showdown with officers after he missed a few meetings with his parole officer.

“They went there to discuss with him why he was missing those things,” Chickasha Police Chief Shanon McClain said.

The parole officer called for backup when he realized he was going to have a hard time getting Mandrell to cooperate. A close look at the dash cam video reveals why.

“He was carrying a Jose Cuervo Tequila bottle in his right hand,” McClain said. “Officers made contact with him and took him into custody.”

However, it wasn't easy. When they tried to put him inside the probation officer's vehicle, things went south.

“He tried to push back into the driver's seat,” McClain said. “They extracted him out of the car, and as they were doing that he kicked one of our officers in between the legs and did that a couple of times.”

They finally got him loaded up and booked into jail.

Mandrell was charged with a slew of charges including assaulting an officer.

Chickasha Police End Up In Scuffle With Drunk Suspect