Dean's Blog: List Of What OU Must Do To Win 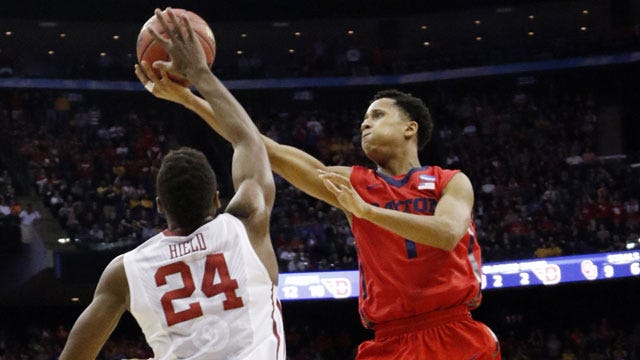 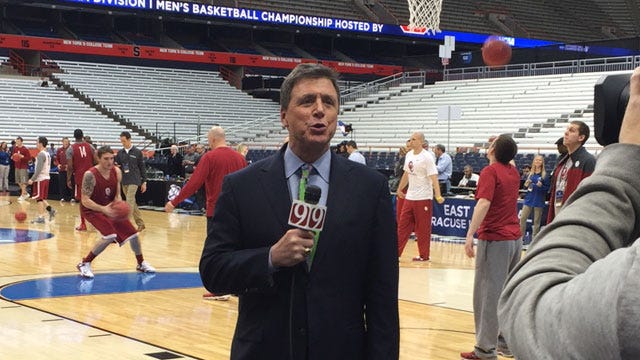 Oklahoma and Michigan State meet in a midnight scrum here in Syracuse with the winner advancing as the likely favorite in Sunday's game that would send the winner to the Final Four.

With tip likely closer to 10:45 p.m. EST than the projected 10:07, it'll be a long day for both teams before they play the biggest game in some of their lives. It'll be well after 1:00 a.m. EST before this one is over. Shame on the NCAA. But that topic will have to wait.

Of more importance right now is what the two-point underdog Sooners must do to defeat the Spartans, who are playing in their fourth-straight Sweet 16, and seventh in the past eight seasons.

CAN'T BE OVERWHELMED BY MOMENT: State is not vintage Sparty, but they've been in this situation enough to treat it like just another big game. This OU team had not experienced a single NCAA Tournament win until this postseason. However, that's where coaching can come in handy with Lon Kruger instructing his troops to stay in the moment and not get lost looking around the massive Carrier Dome and become overwhelmed and seeing nothing but green.

CAN'T LET MSU SINGLE TASHAWN THOMAS: Tom Izzo told some insiders he's decided on the strategy of “packing it in on the inside against TaShawn Thomas” and not being as concerned with Hield and Cousins from three. I expect impressive senior forward Branden Dawson to be matched up with Thomas, OU's only reliable inside scoring threat. Dawson is MSU's best defender. He's strong, athletic, savvy and the first player 6-6 (or shorter) to lead the Big Ten in rebounding since 1988 in league games. TaShawn struggled yesterday with 12-footers in practice, and clearly was not confident. I'd expect MSU to give him that shot, which may ultimately become the critical element of the game because if he can convert, it'll open up OU's 3-point gunners who are much, much better with open looks than what they would be with Sparty's vaunted defenders contending from distance if they weren't cheating off inside on Thomas.

MUST LIMIT SCORING GUARD TRICE: The 6-foot senior is playing his best ball, hitting .395 from 3-point range in his last thirteen games when he's averaged 17.8 points and 4.5 assists. They'll go to him in clutch moments where he's excelled recently and is by far Izzo's best shooter and scorer. Look for OU to cheat on Trice and encourage freshman point guard Lourawls “Tum Tum Nairn Jr. to shoot. I can outshoot Tum Tum if he'd meet me for a game of HORSE in 10 minutes. I counted him miss nine straight ten-foot jumpers in drills yesterday.

MUST GET BENCH PRODUCTION: OU would not be here had reserve guard Frank Booker hitting a crucial three in the second half of the Dayton game and leading a short bench that was strong when needed most. But comparatively speaking, OU can't rely on much from the reserves. Both teams will rely on eight players to get it done.

NEED FORTY PERCENT 3S: Sparty has the percentage advantage, .388 to .346. In the tournament, Buddy Hield is 10-of-29 or .235 from 3-point range. I don't see any way OU wins if he and his mates don't average 40%. Buddy can do a lot of things, but creating his shot is not high on that list. So he must get good looks and he must knock them down. Something he's struggled with for the past few weeks.

BUDDY HIELD MUST BE BEST PLAYER: See above. Hield is the highest-rated NBA prospect and the reigning Big 12 Player-of-the-Year. Gotta make it happen under the big lights tonight when basically no analyst is giving OU a chance to win. While I believe it'd be an upset, they're just two-point dogs. Ultimate respect for Izzo and Company. No respect for the Sooners and the conference they play in that has been embarrassed in the tournament.

MUST CONVERT IN TRANSITION: They simply must do a better job of getting the easy points, because MSU's suffocating and physical defense will likely limit anything remotely easy in a half court game. Hield in particular must be much more assertive on his forays to the hoop in transition. The cat is 6-4, strong and athletic. Passive flings toward the hoop in a physical atmosphere where refs won't send shooters to the line on the standard bumps and slaps. Chicken and egg for Sooner fans. If Hield were to explode with authority in transition, yes, OU's chances of advancing go up. But so does his draft stock. And right now he's sitting on the fence at the bottom of the first round, which is where Lon Kruger tells me is what will determine whether Hield comes out or stays. Or said another way, whether OU will be a contender next season or an also-ran.

MUST WIN CAROM-SNAGGING DUEL: My guess is Tom Izzo's game plan will list winning on the backboards as one of his two biggest points of emphasis – defending in transition No. 1. MSU has a Big Ten best +6.0 rebounding margin, having out-rebounded 27 of 36 opponents. OU has been even better. Barring a significant shooting advantage, OU can't win without winning on the boards. This probably means the guards must have a big night carom-snagging caroms.

MUST WIN TUROVER GAME: MSU averages just 11.39 turnovers a game, the lowest of the Izzo era. OU averages 12.1 but has been turnover prone under the pressure that's expected from Sparty tonight. OU must be strong with the basketball, the way they were when they shredded the West Virginia press in Norman after gagging in Morgantown with soft turnover after soft turnover.

IN THE END….OU needs to play at the level they played at home against Iowa State and West Virginia, and occasionally on the road. However, most of the games not played in Norman saw the Sooners play less than forty minutes of strong basketball. Unless Sparty lays an unexpected egg, Oklahoma will need its best game away from Norman to advance.

Possible. But challenging. Enjoy, and keep it tuned to News 9 in Oklahoma City and KOTV in Tulsa.

Dean's Blog: List Of What OU Must Do To Win