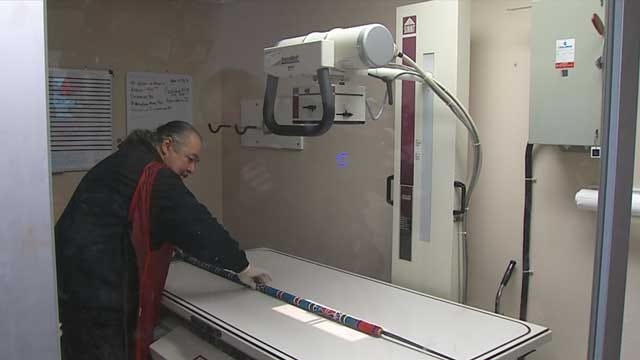 Members said they are trying to X-ray and scan a former Comanche chief's possessions to learn more and they have enlisted the help of an unlikely place to do it.

Usually CT scans at Blue Pearl Veterinary Hospital would help diagnose a pet, but they revealed intricate details of a Comanche lance on Monday.

The lance is from the 1870's and belonged to Quanah Parker, a warrior and the last chief of the Comanche tribe.

His wife, Topay, beaded it for him.

“You could clearly see the age difference in the beads,” said Bill Voelker, Executive Director of Sia.

The group documented the lance for historical purposes.

This lance was one of only four owned by Quanah.

“I just can't help but think I wonder what Quanah would be, how he would be responding right now,” said Voelker as the lance underwent X-rays.

A CT scan later focused on the lance ends.

The scan showed someone may have tried to improperly repair the lance after Quanah died.

“A total lack of knowledge of tradition on how that should have been done, another whole layer of leather never should have been added to the lance core as we're seeing here,” Voelker explained.

A day at the vet revealed the lance's wooden core was original and had never been broken.

It was authentic and priceless.

“The bead condition is amazing, the little bit of stabilization that we are seeing problems with is remarkable,” Voelker told News 9.

Sia has to handle some final preservation details to the lance before packing it up and sending it to Canyon, Texas, where it will be on display in a museum.

Before World War I, many Comanche lances were destroyed.

However, there were very few left by that time, which makes this particular lance even rarer.

Learn more about the work Sia is doing.