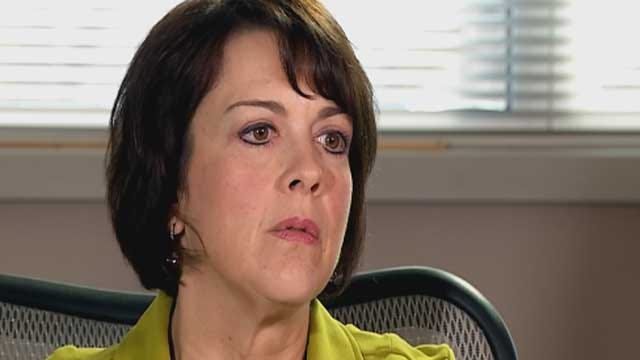 After the bombing, Oklahomans came together in a sea of support. However, one bombing survivor remembers one simple act of kindness that touches her the most.

Amy Downs worked as a teller at the Federal Employees Credit Union inside the Murrah Federal Building when the bomb went off.

"I remember everything," she said. "I could hear people screaming all around."

Downs fell three floors and was trapped under three feet of debris.

"I remember hearing this woman screaming right in my ear 'Jesus help me, Jesus help me' in just this terrified voice and then realizing that was me, that was my voice," she remembers.

She spent the next six and a half hours buried alive as rescue workers worked carefully to free her.

Her legs severely injured, Downs spent eight days in the hospital. While there, she learned her best friend at the credit union, Sonya Sanders, didn't make it. Through her grief, though, she remembers seeing an unforgettable sight outside her hospital window.

"It was the middle of the day and what I saw was all the cars, everyone with their headlights on," she said.

Days after the bombing, a call went out for Oklahomans to drive with their headlights on -- to show support and solidarity for the victims.

"It's such a simple gesture, but for me, having just gone through what I'd gone through, finding out one by one 18 of my 33 coworkers were killed and then seeing these strangers out on the road, driving with their headlights on, in that moment, it felt like it was for me," she said.

When Downs got out of the hospital, she began to make good on the promises she had made to herself.

So, she went back to college and got her master's degree, had a son and took charge of her health through cycling and running. She even remarried. Downs still works at the same credit union - now called Allegiance Credit Union, where her 18 lost coworkers are honored in a memorial garden.

"I got a wake up call that life is short and we're not guaranteed each day," she said.

Each day she is given, she lives to remember and honor the bombing victims, especially during the OKC Memorial Marathon.

"When all those thousands of runners come downtown to run our marathon and those banners go up with the 168 names on them, it's like the cars are still driving with their headlights on," she said. "They're remembering, it's the statement 'we won't forget, we're going to remember.'"

We're asking you to join us and do it again. Let's help honor Amy and all the survivors and victims of April 19th. Turn your headlights on next Sunday, and every April 19th. It's a small way to show we're all standing together to remember, 20 years later.