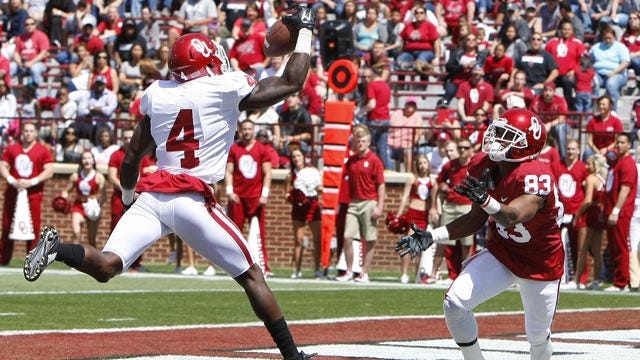 College football returned to Norman on Saturday, even if it was just for a single afternoon. Oklahoma gave a crowd of 42,807 its first glimpse of the 2015 Sooners at the annual spring game. Here are three takeaways from the action on Saturday.

A year ago, the wide receiver group was one of the weakest parts of the OU team. This season, however, the unit could be a team strength, thanks in large (literally) part to newcomers and players ready for a bigger role in the offense.

Sterling Shepard is a known commodity at receiver, but newcomers Dede Westbrook and Mark Andrews, as well as sophomore Jeffery Mead stood out on Saturday in a big way.

“I feel like I'm kind of in the same position I was last year—I'm working for a spot,” Mead said. “We'll see how it goes. Everyday in practice you just go out and do the same thing.”

10 different receivers caught passes on Saturday, seven of which will probably factor heavily in the receiver rotation this season. Mead, a lanky 6-foot-6 guy from Union High School in Tulsa, finished with four catches for 93 yards, including a deep pass in double coverage he managed to haul in with one hand.

Mead has been a beneficiary of the new offense after inconsistent playing time a year ago. The simplicity of the offense has been a big boost for the entire unit after last year's struggles.

“There are basic plays and there are variations off those plays,” Mead said. “You figure out the main concept and then you can basically do anything in the offense.”

The Sooners received a lot of help in the form of Dede Westbrook, a junior college transfer who plays like a bigger, faster version of Jalen Saunders. Westbrook had a terrific 27-yard catch and run as well as a 22-yard run on a reverse.

In addition to Westbrook, Mark Andrews has been turning a lot of heads this spring. The redshirt freshman from Scottsdale, Ariz. has the size (6-foot-6, 245) to overwhelm corners, but the speed to run away from linebackers. He had two catches for 56 yards, but one of those was a deep pass where he dragged a poor cornerback about 15 yards.

Gaining experience and chemistry in the midst of a quarterback battle isn't the easiest thing for the receivers, but Andrews said it's been good for the whole team.

“It's a ton of competition and I think that's great for the team,” Andrews said. “They're always trying to get better, trying to one-up each other and they're all feeding off that. I think that's making our team better.”

An influx of talent has also made the Sooners better. No matter who wins the starting quarterback job will have a lot of good options to throw to. A glaring weakness is about to become a major strength for OU.

No Clear Leader Among Quarterbacks

Most of the fans in attendance came to Owen Field to see one quarterback stand out amongst the crowd currently battling for the open starting position. Through most of the spring, reports have indicated Baker Mayfield has been the best of the quartet, but Saturday told a different story.

The four quarterbacks combined to throw four interceptions (two by Mayfield) and just a single touchdown (also by Mayfield). Trevor Knight and Cody Thomas completed less than 50 percent of their passes as well. Mayfield finished 10-for-13 for 176 yards and Justice Hansen was 5-for-5 for 70 yards.

“I thought for the first time as a group all spring they tried to make too much happen,” offensive coordinator Lincoln Riley said. “We got off to really good starts on drives and moving the ball was not a problem but we forced balls and the defense did a good job of making our guys pay for it. It'll be a great learning experience.”

Oklahoma ran a very basic set of plays on offense, opting to hold their cards close to the vest and not give anything away with the new OU offense, an offense that everyone seems to be enjoying, especially the quarterbacks.

“It's just fast-paced, not a lot of thinking,” Hansen said. “We just go out there and really just play.”

The competition was always going to run into the summer, but without a clear leader right now, it's unlikely a starter will be named until right before the Sooners begin the season against Akron. Riley said the formula for winning the job is fairly simple: hold onto the ball and score points.

“It's about who moves it, who takes care of the ball, who progresses, which they're all doing it to a point,” Riley said. “You never know with forecasting, but it looks like they're going to make it tough on us. They're all doing some good things and they've all had some pretty strong springs.

“I think all the guys, we're all growing together,” Andrews said. “Our chemistry is growing, and everything is starting to click. In practice, you can tell that we feel more comfortable audibling plays and that sort of thing.”

Consistent quarterback play has eluded Oklahoma since Landry Jones graduated after the 2012 season and based strictly on Saturday, there's no great player ready to change that. The Sooners may just have to deal with many downs as well as ups with this group unless something changes in the summer and fall.

Suffice to say, the Sooners were just shy of a dumpster fire on defense last season, especially at the end of the year. Two new position coaches and a shuffling of coaching assignments have put the Sooners in a position to hope for improvement in 2015.

Saturday, the defense was pretty generic, taking its cue from the offense by rolling out a vanilla game plan and focusing on the basics. The Sooners did come up with four interceptions and a fumble, a big positive to take away from Saturday.

“The big play mistakes from a year ago had nothing to do with talent,” defensive coordinator Mike Stoops said. “They had more to do with assignments and responsibility, execution.

“We feel like we have a lot of talented players, particularly in the secondary. We feel this group is very talented. It's a group that has experience in playing together, working together.”

While the secondary may be experienced on the first unit, the Sooners were trotting out walk-ons with the second unit at safety. The trio of safeties Oklahoma signed in this most recruiting class can't arrive soon enough, and will have an opportunity for a lot of playing time right away.

Stoops also will find himself in the press box now, giving him a better vantage point for calling plays and mapping out the defensive gameplan as the game progresses. The move from the secondary to outside linebackers also gives him more time to focus on the defense as a whole.

“I coach one guy; I coach Striker, that's it. And Devante (Bond),” Stoops joked. “That part is easy.”

Bond was one of the few clear standouts on the defensive side of the ball on Saturday, and his play opposite Eric Striker will be very important for the Sooners this year.

It was difficult to gauge much about the Sooners' performance, but it's no secret this unit has to be much better this season. A more important question is whether or not OU will actually see improvement this year.